'Framing the Altarpiece: The Birth of the Modern Painting out of the Spirit of the Gothic Cathedral' @ the Bass Museum of Art

'Framing the Altarpiece: The Birth of the Modern Painting out of the Spirit of the Gothic Cathedral' @ the Bass Museum of Art 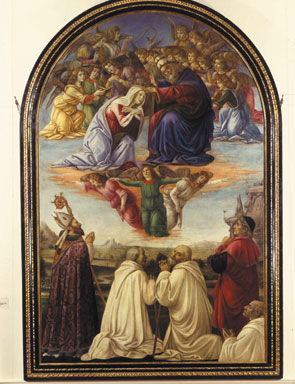 MIAMI BEACH, FL.- Framing the Altarpiece celebrates the re-installation of one of the Bass’s masterpieces, The Coronation of the Virgin, attributed to Sandro Botticelli and Domenico Ghirlandaio, and re-introduces several significant Renaissance altarpieces from Italy, Spain, Germany, and the Netherlands. Altarpieces that once functioned as religious objects within churches were also works of art, recognized as such today in the secular space of the museum or private collection, an ambiguity mediated, then and now, by their frames. This exhibition explores the relation of the frame to the altarpiece, sculpture to painting, abstract decorative to naturalistic elements, the material to the immaterial, thereby revealing how the modern painting, hanging on the wall as the creation of an exceptional individual, derives from a crucial transition in Medieval and Renaissance art.

Other works included in the exhibition are Madonna and Child Enthroned with Music-Making Angels and Saints by Giovanni Mazone (Barbagelata), c. 1433 – 1512; Four Wings of a Passion Altar, Master of the Revaler St. Elizabeth Legend, Active c. 1480-1500; and The Crucifixion Triptych by Cornelis Cornelisz van Haarlem, 1562-1638. The single greatest example, The Ghent Altarpiece of 1432, has famously posed a riddle for art history. Framing the Altarpiece argues that this exceptional work embodies a unique transition from Gothic cathedral sculpture to illusionist painting, reflected in all of the altarpieces in the Bass collection.

The Bass Museum’s new Adjunct Curator Benjamin Binstock, a specialist in Renaissance and Baroque Art, earned his PhD. in art history at Columbia University in 1997, after study in Aix-en-Provence, Amsterdam, Berlin and Berkeley. He has published widely on Rembrandt, Vermeer, Carel Fabritius, and the history and theory of art history and aesthetics. His recent book Vermeer’s Family Secrets. Genius, Discovery, and the Unknown Apprentice (Routledge: 2009) offers a radical revision of current scholarship, including his controversial claim that Vermeer’s eldest daughter Maria painted several of the works now attributed to her father. Binstock has taught at Columbia, New York University, the CUNY Graduate Center, and now at the Cooper Union in downtown Manhattan. He was a visiting member of the Institute for Advanced Studies, Princeton and the American Academy of Berlin, and created and directed Derrida Month at New York University in 2000, in which Jacques Derrida participated shortly before his death.

Framing the Altarpiece: The Birth of the Modern Painting out of the Spirit of the Gothic Cathedral is on view to the public in the Gertrude Silverstone Muss Gallery from Sept. 11 – Nov. 8, 2009

Commentaires sur 'Framing the Altarpiece: The Birth of the Modern Painting out of the Spirit of the Gothic Cathedral' @ the Bass Museum of Art