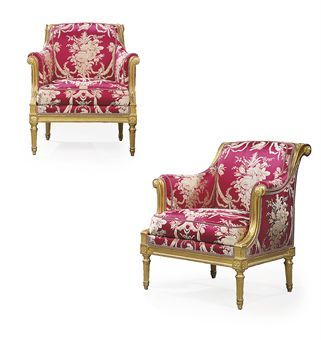 With their outscrolled backs and arms, these elegant bergeres à la turque relate to the seat-furniture by Jacob supplied in 1777 to the Comte d'Artois' Cabinet turque at the Palais du Temple. The fashion for chinoiserie had obviously manifested itself in France much earlier, but had not yet influenced the shapes and ormamentation of the chair-maker's domain or menuiserie, the exotic 'touch' mainly being introduced through the upholstery. However, during the reign of Louis XVI, and probably initially through projects for Marie-Antoinette and the comte d'Artois, designs for chairs were being made with an entirely exotic appearance (B. Pallot, Furniture Collections in the Louvre, vol. II, Paris, Dijon, 1993, pp. 133-135, no. 44).