LONDON.- Sotheby’s London sale of Western Manuscripts on Tuesday 7th July 2009 has a combined total sale estimate of £3 million and will include the sale of Medieval Illuminated Miniatures from the Collection of the Late Eric Korner. The highlight of the various-owner sale is a stunningly illustrated manuscript dating to the mid-15th century which has surfaced for the first time in half a century, and which contains three illustrations thought to be the earliest representations of Joan of Arc (lot 26, est. £1-1.5 million). The remarkable manuscript documents the life of one of the most important and powerful emperors in Europe in the late middle ages, Sigismund of Luxemburg (1368-1437), king of Hungary, Germany, Bohemia, Lombardy, and the Holy Roman Emperor. Among the numerous records of battles, attempted poisonings and political intrigue, it includes the earliest depictions of Joan of Arc, who had contact with Sigismund in 1429, immediately before leading the French army against the English which resulted in her capture, trial and martyrdom in 1431.

The undoubted highlight from the Korner single-owner sale is the stunningly illuminated miniature book of prayers known as The Korner Hours, dating to circa 1475-80 (lot 118, est. £600,000-800,000). This tiny book (75mm by 55mm), of breathtaking quality, is the forerunner in the trend for tiny editions, illustrated with hair-stroke painting to achieve incredible detail. It dates to a precisely recognisable moment in art history of sudden and dramatic leaps of innovation, and is the smallest and one of the oldest of a revolutionary new type of manuscript.

The first-ever depictions of Joan of Arc
Dr Timothy Bolton of Sotheby’s Western Manuscripts Department said of the history of Sigismund of Luxemburg: “The swashbuckling and often blood-thirsty account marks a significant development of ambitious pictorial decoration and vernacular literature and is a celebration of the emperor’s involvement in many major events in this era’s history. It includes the religious wars with the Hussites and the story of Joan of Arc, and is one of only two primary copies to exist with illustrations.”

In the image on the previous page King Sigismund directs a kneeling messenger to give a sealed letter to “the Virgin who has performed many miracles” – Saint Joan of Arc who stands to the right in a burgundy-red dress and a white head-dress. In another of the three illustrations, Joan of Arc, this time referred to as “the maiden of Orleans”, directs the same messenger to return with a letter for King Sigismund. In the final image, Joan of Arc rides at the head of a column of armed French knights as the English forces withdraw before her, casting down their bows and arrows.

A peasant girl born in eastern France in 1412, Joan of Arc led the French army to several important victories during the Hundred Years' War, itself a dispute on the succession to the French throne. At the outset of her career the English had almost achieved their goal of a dual monarchy under English control and the French army had won no major victory for a generation. By the beginning of 1429 nearly all of northern France and some parts of the southwest were under foreign control, with the English ruling Paris and the Burgundians controlling Reims. Having claimed divine guidance – asserting that she had visions from God who told her to recover her homeland from English domination – Joan of Arc’s endeavors lead to her capture by the Burgundians, her sale to the English, trial and burning at the stake when she was nineteen years old.

The illustrator of this particularly rare and impressive manuscript was Diebold Lauber – an important artist from this period whose works are very scarce. Works by this accomplished artist stand at the intersection of artistic, economic, religious, linguistic and literary history in the 15th century, and they provide us with a vivid insight into a number of contemporary details, from kings, battles and executions to costumes and feasts. 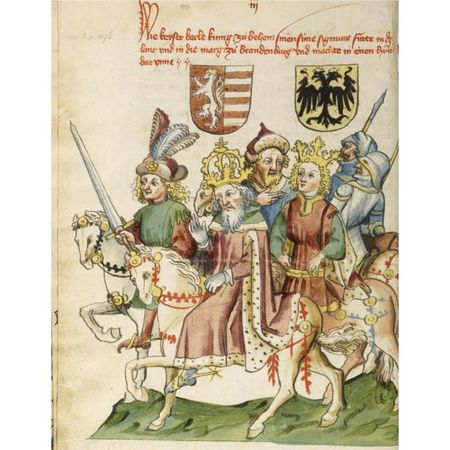 The Korner Hours
The creation of this minute manuscript of such spectacular artistic quality dates to a moment of history when art made significant progress. Illustrated by two of the most significant artists of the middle ages – Simon Marmion and the Master of Mary of Burgundy – and surviving over five centuries in remarkable condition, this miniature illuminated manuscript is thought to have been made for Charles the Bold or a member of his immediate family. In the early 1470s the Burgundian court of Charles the Bold and Margaret of York was the wealthiest in Europe. They asserted their wealth and power through artistic patronage, drawing the greatest artists and encouraging artistic innovation.

The manuscript is a Book of Hours, a volume to be carried about the person, and used to recite Latin prayers from at certain hours of the day in order to gain admittance to heaven after death. 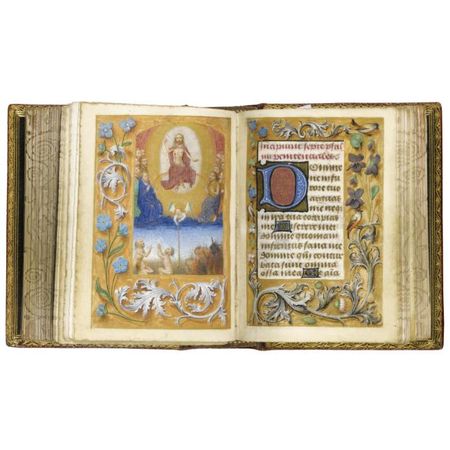