Asian Art Galleries at the Birmingham Museum of Art Reopen

Asian Art Galleries at the Birmingham Museum of Art Reopen BIRMINGHAM, AL.- The Birmingham Museum of Art will reopen its Chinese and Japanese galleries on June 28, 2009 following extensive remodeling. The galleries were closed to accommodate the 2007 blockbuster exhibition, Pompeii: Tales from an Eruption. The redesign highlights the strengths of the collection and allows for the display of more objects.

"Many of the objects on view either have not been seen for many years or have never been seen by the public. The redesign gives us the chance to show the remarkable breadth and depth of our collections," says Don Wood, PhD, senior curator and The Virginia and William M. Spencer III Curator of Asian Art at the Birmingham Museum of Art. "Although no new footage was added to the galleries, a creative use of existing space enables us to show far more of the permanent collection than before." China
The Chinese galleries have been transformed by the display of materials that span the thousands of years of Chinese history: rare funerary goods, Imperial jades, full sets of tomb figures from the 8th and 15th centuries, and an entire wall of blue and white porcelain, with nearly 100 examples from all periods.

"A 15th-century Buddhist temple mural─centerpiece of the Chinese gallery─has been painstakingly cleaned and soon a conservator will work on-site to open a 'window' of cleaning on the reverse side of the mural," says Wood. "Damaged by fire long ago, the back of the mural presents opportunities for discoveries that have been covered for centuries under dust and smoke."

At one end of the Chinese gallery is the jade collection of Mrs. Georg Vetlesen. Formed in the early part of the 20th century, this collection is now on long-term loan from the Museum of Natural History at the Smithsonian Institution. The collection is famous for its Imperial Chinese jades from the 16th through the 19th centuries. This is the first time it has been on view in over 25 years.

On display with the Vetlesen collection is a 250-pound jade boulder from the Kunlun Mountains in northwest China. From ancient times, this stone is considered to have protective qualities.

"One of the great joys of jade is how it feels," says Wood. "The Museum acquired this boulder so our visitors could touch and feel for themselves jade's cool, almost sensuous surface." Japan
The Museum's popular Samurai display will return as a focal point in the Japanese galleries. Consisting of superb sets of full armor and many important helmets, blades, guns, and other objects, this is the only display of its kind in the Southeast.

A variety of new hanging scrolls and folding screens will be rotated in the refurbished painting and sculpture gallery, as will the Museum's growing collection of Japanese Buddhist sculpture. A rare 12th-century image of Jizo Bosatsu, one of Japan's favorite Buddhist deities of mercy, will be featured. Dressed plainly as a Buddhist monk, this deity helps travelers in distress, small children in trouble, and women in labor.

Many other visitor favorites will be back, as will many rarely shown pieces and new acquisitions to the collection.

Featured for the first time from the Museum's permanent collection are outstanding Japanese decorative arts of the Meiji period (1868-1912). After 250 years of self-imposed isolation, Japan opened to the West in the mid-19th century, creating an artistic craze for anything Japanese. Artists such as Monet, Tiffany, Whistler, and others were influence by the astounding creativity of Japanese art.

"The Japanese long have played an important role in our own culture and their profound effect on the decorative arts can be seen in other areas of our own collection," says Gail Andrews, R. Hugh Daniel Director of the Birmingham Museum of Art. "For instance, Japanese metalwork shown at the Philadelphia Centennial International Exhibition of 1876 influenced manufacturers such as Tiffany & Company to produce silver in the japonais style. American crazy quilts also were inspired by the Japanese presence at the 1876 Exhibition. There are beautiful examples of each in the Museum's collection of American art."

New installations also are planned for the Indian sculpture gallery and the Southeast Asian ceramic gallery, including the finest collection of Vietnamese ceramics in the U.S. Visitors may follow the reinstallation progress and watch for special openings, speakers, and other engaging activities and learning opportunities at www.artsbma.org. History of the Asian Art Collection
The Asian collection at the Birmingham Museum of Art began not with the gift of a single major collection, but rather with the gifts of objects from a wide variety of individuals. Often the one or two pieces given were the only Asian art owned by the donors.

In 1972, Dr. Sherman E. Lee, then Director of the Cleveland Museum of Art, came to the Birmingham Museum of Art to evaluate its Asian art and advise how to form a stellar collection. He encouraged the formation of a support group to help with acquisitions and educational activities. This led to the founding of the Birmingham Asian Art Society in 1975 by M. Bruce Sullivan, MD, L. Paul Kassouf, Wyatt Haskell, Elton B. Stephens, and the William M. Spencer family. So began the remarkable growth of the Asian art collection.

Over the years, individual gifts from the Birmingham Asian Art Society, area residents, and collectors, along with gifts of collections and works from all over the U.S., Europe, and Asia have grown the collection to more than 4,000 objects. A sense of individual identity and community pride has resulted in one of the finest and most comprehensive collections of Asian art in the United States.

"Together with our Korean, Indian, and southeast Asian collections, these new galleries and the holdings of our Museum library offer considerable resources for scholars of Asian art, history, and culture," says Wood.

Senior Curator Donald A. Wood, PhD, has served at the Birmingham Museum of Art since 1987. He was appointed as The Virginia and William M. Spencer III Curator of Asian Art in 2000, and served as Chief Curator from to 1996 to 2008. Wood organized the acclaimed exhibition The First Emperor: Treasures from Ancient China (1996) that traveled to the Walters Art Museum, Amongst the Clouds: Textiles of the Miao People of Southwest China (2006), and Kamisaka Sekka: Rimpa Master─Pioneer of Modern Design (2003), and numerous other exhibitions. Wood has been traveling to Asia for the past 35 years and his expertise in Asian art puts him in high demand as a consultant and guest speaker. 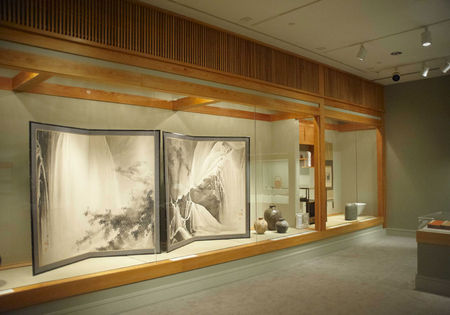