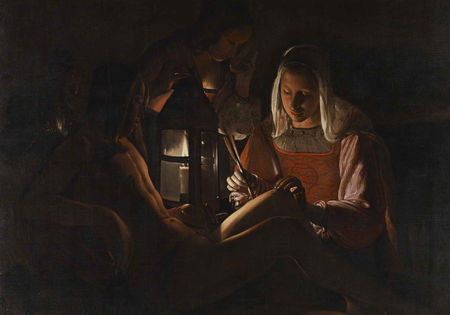 SEATTLE, WA.- The Seattle Art Museum announced that 20 works of art have entered the museum’s collection in honor of outgoing director Mimi Gates. Gates, whose last day at the museum is June 30, 2009, has been the museum’s director since 1994 and leaves behind a distinguished legacy. The SAM Board of Trustees also recently announced that the bridge that spans over the railroad tracks at the Olympic Sculpture Park and features Teresita Fernandez’ Seattle Cloud Cover will now be named the “Mimi Gates Bridge” in her honor.

In addition the Mayor of Seattle, Greg Nickels, proclaimed June 30 to be “Mimi Gates Day” in the City of Seattle on occasion of her retirement and in recognition of her remarkable contributions to the community.

The works of art given to SAM in Gates’ honor are diverse and reflect her many interests and scholarly background such as a purchased gift of two stunning Chinese painted scrolls by Bada Shanren (Zhu Da) entitled Pine and Rock and Lotus and Ducks from the 1690s, an 18th century Chinese painting by Sun Yi, Peony, from Stephen and May Tse, and Beach Scene (1890s), a modern Japanese “nihonga” screen painting by Takeuchi Seih from the collection of Griffith and Patricia Way.

Other gifts are stellar works from regional collectors that complement areas of SAM’s collection such as Georges de La Tour’s St. Sebastian Tended by St. Irene, (ca. 1638-39) given by Elizabeth and Richard Hedreen, Clyfford Still’s Number 2, 1949 a promised gift from the collection of Jane and David Davis and An Ocean Headland (1907) by Rockwell Kent, a promised gift of the Ann and Tom Barwick Family Collection.

SAM’s growing Australian Aboriginal collection adds Awelye “Women’s Ceremony” (2006) by Abie Loy, a gift from the collection of Robert Kaplan and Margaret Levi in honor of Gates. Jim Dine’s In the Middle Of Ourselves (2001), a promised gift of the artist and Diana Michener, and the 22 photographs by Corin Hewitt that comprise the series Toad in a Hole: Performance #1 (Red Hook, NY), 2007 purchased by Rebecca and Alexander Stewart in Gates’ honor will enhance the museum’s modern and contemporary collection.

Believing that a museum’s permanent collection is its heart, Gates championed the expansion of SAM’s collection. Under her leadership 6500 works were added to the collection throughout her tenure including an unprecedented series of commitments from prominent museum patrons and collectors. The gifts, which commemorated the museum’s 75th anniversary, represented a wide range of art and include more than 1,000 works from over 60 collections. In a remarkable show of support, eight of the Northwest’s leading collectors have committed their entire collections over time, creating the largest gift in the museum’s history.

Gates will become Director Emerita upon her departure in honor of her extraordinary accomplishments at SAM. She will volunteer at the Seattle Asian Art Museum where she will establish a Center for Asian Art and Ideas. The Center will focus on exploring all aspects of Asia, past and present, by working with local, national and international partners to present exhibitions and programs to the public.

“I am very moved by these extraordinary commitments to the collection as well as looking forward to my role as Director Emerita and focusing on the establishment of the Center for Asian Art and Ideas at Volunteer Park,” said Gates. “As Asia rises ever higher on the world stage, we all need to be well informed about and engaged with this dynamic part of the world.”

Last month, Derrick Cartwright, executive director of the San Diego Museum of Art, was named the next director of SAM. He will assume his position on October 1, 2009. Maryann Jordan, SAM’s Vice Director, will be the interim director until his arrival.