'The Art of Power: Royal Armor and Portraits from Imperial Spain' @ the National Gallery of Art, Washington

'The Art of Power: Royal Armor and Portraits from Imperial Spain' @ the National Gallery of Art, Washington WASHINGTON, DC.- Armor from the renowned Spanish Royal Armory in Madrid will be paired for the first time with portraits by masters such as Peter Paul Rubens, Alonso Sánchez Coello, Anthony van Dyck, and Diego Velázquez depicting emperors and kings wearing the same armor in The Art of Power: Royal Armor and Portraits from Imperial Spain at the National Gallery of Art, Washington, June 28 through November 1, 2009, the sole venue worldwide.

This unprecedented exhibition, which explores how armor was used to cultivate the image of royal power in late15th- to 18th-century Spain, highlights some 75 armors and paintings, in addition to magnificent tapestries and works on paper that depict armor worn in the courtly, chivalric context of parades, pageants, and jousting tournaments and occasionally, battles.

"Armor in the Renaissance was an artistic symbol of martial and sovereign power. Paired with court portraits that exude a sense of gravity and formality, the armor on view will reinforce the power of the sitter," said Earl A. Powell III, director, National Gallery of Art. "We are grateful to the Patrimonio Nacional of Spain for extraordinary loans from their collections, as well as to the museums who graciously agreed to lend works to be shown with the sumptuous armor from the Royal Armory."

The Spanish Royal Armory, Madrid
The Royal Armory in Madrid, formed at a time when the Spanish Crown was at the height of its international power, is the oldest and one of the finest and largest collections of armor in the world, having great historical, artistic, and symbolic significance. Created largely by King Philip II (reigned 1556–1598) who acquired the armor belonging to his father Emperor Charles V (reigned 1519–1556), it contains not only the personal armor of the Spanish monarchs, but also military trophies and diplomatic and family gifts. The exhibition will examine the significance of the Armory as a key element in the development of court portraiture in Spain from the 16th to the 18th centuries.

Exhibition Highlights
The Art of Power will include several full suits of armor, helmets, shields, and equestrian armor dating from the reign of Emperor Maximilian I (1508–1519) to those of Emperor Charles V and his successors Philip II, Philip III (1598–1621) and Philip IV (1621–1665), all of whom were members of the Habsburg dynasty that ruled much of Europe in the 16th and 17th centuries. While sometimes worn in battle, most of the armor in the exhibition was created for use in pageantry.

Suits of armor were unique objects of great monetary and symbolic value. Much more costly than paintings by the leading artists of the day, they featured complex iconography and designs that expressed the ruler's strength and power, often by comparing him to heroic figures from ancient history, mythology, or the Bible.

The exhibition opens with a work of art that combines armor and portraiture in a single object: a parade helmet by Filippo Negroli that is also a portrait of Charles V. The helmet portrays the emperor with stylized blond curls and the symbol of the Golden Fleece on the collar, reflecting Charles V's status as grand master of the prestigious chivalric order.

The next gallery features works of art and armor belonging to Charles V's immediate predecessors: his grandfather, Emperor Maximilian I, and his father, Philip the Handsome (1478–1506). Emperor Maximilian I promoted chivalric ideals by establishing rules for chivalric games and festivities and he laid the foundations for the symbolic decoration of armor. An outstanding example of Maximilian I's equestrian parade armor (c. 1540) by Kolman Helmschmid, features superb decoration drawn from the biblical tradition (scenes from the story of Samson) and classical mythology (scenes from the Labors of Hercules)—two essential pillars of the Renaissance chivalric ideal.

The Triumphal Arch of Maximilian (1515; 1799 edition), a collaborative effort by Albrecht Dürer (1471–1528) and his workshop, comprises 42 woodcuts and 2 etchings. The work represents the Habsburg genealogy and historical scenes celebrating major events in Maximilian's life, including the military campaigns and dynastic marriages with which means he put together his empire. With the marriage of Philip the Handsome to the daughter of Ferdinand of Aragon and Isabella of Castile, Spain became part of the Hapsburg Empire. The Portrait of Philip the Handsome (c. 1495–1506) by the anonymous Master of the Joseph Sequence—is the first known portrait of an armor-clad king of Spain.

The Magazine of Troops in Barcelona (c. 1554) is one of three large tapestries in the exhibition that depict armor in use. Woven in the workshop of Willem de Pannemaker from designs by Pieter Coecke van Aelst and Jan Cornelisz Vermeyen, the tapestry shows Charles V reviewing his troops before their departure for battle against the Ottoman Turks from whom he captured the port city of Tunis in North Africa. The "Mask" Garniture of Emperor Charles V (1539), made by the Milanese armorers Filippo Negroli and his brothers, is the only known suit of armor signed by Filippo and belongs to the best preserved Italian garniture (full set of armor) of the first half of the 16th century. Negroli was the key figure in the development of armor in the all´antica style, which was inspired by ancient Roman armor, mythology, and classical history. A helmet for Charles V, made by Filippo Negroli of Milan. Photo: Patrimonio Nacional, Madrid

Royal armor was often adorned with images of saints and the Virgin and Child to underscore the role of the ruler as the ideal Christian soldier and defender of the Catholic faith. In addition, the Helmet (Burgonet) of Emperor Charles V (1545), by Filippo and Francesco Negroli alludes to Ottoman Turkey, Charles V's principal enemy in the Mediterranean, with a symbolic image of an Ottoman Turk, hands bound.

Emperor Charles V and and his son King Philip II reigned at a time of splendor in Spanish history, when court portraits in luxury armor became an established type that conveyed the idea of royal power of the Spanish Hapsburg dynasty.

Juan Pantoja de la Cruz's Portrait of Charles V (1602) is a full-length portrait in armor bearing the symbols of the subject's imperial majesty—the baton of command, the sword, and insignia of the Order of the Golden Fleece. The definitive copy of a lost original by Titian, this painting depicts Charles in the armor he wore at the Battle of Mühlberg (1547) in which he defeated German princes. The portrait is exhibited alongside the actual armor depicted, created in 1544 by Charles' favorite armorer, Desiderius Helmschmid. In the hopes that Philip would succeed him as Holy Roman Emperor, Charles V arranged for his son to undertake a three-year-long trip from Spain to Belgium, Italy, Austria, and Germany while still a prince in order to familiarize him with the territories that might fall under his command. The trip culminated with the meeting of the Diet of Augsburg to elect the next emperor (Charles' brother Ferdinand was ultimately selected). For that occasion, Charles commissioned for Philip an elaborate set of armor from Desiderius Helmschmid, which is recorded in a painting by the Spanish artist Sanchez Coello. Another set of armor known as the Flower-pattern armor (c. 1550) is depicted by Velázquez in Portrait of Juan Francisco de Pimentel, Tenth Count of Benavente (1648), a member of the upper nobility.

Philip II wore the "Burgundy Cross" Armor (1551) created by his favorite armorer, Wolfgang Grosschedel of Bavaria, at the battle of St. Quentin in 1557 against the French—Philip's first major victory as king of Spain. This armor is part of a field garniture with supplementary pieces for jousting and equestrian armor with the same decoration. Its most distinctive feature is the repeating pattern based on the x-shaped cross on which St. Andrew was crucified. The cross, one of the heraldic emblems of the House of Burgundy which was closely linked to the Spanish Crown, is flanked by the insignia of the Golden Fleece. The Burgundy Cross armor is also seen in the full-length Portrait of Philip II (c. 1557) by Anthonius Mor. More than a century later it was chosen for Juan Carreño de Miranda's portrait of Philip's great grandson, Charles II in Armor (1681).

The supreme commander of the Spanish Armada and viceroy of Sicily, Emmanuel Philibert of Savoy, (c. 1624), depicted in a portrait by Van Dyck, was the grandson of Philip II, nephew of Philip III, and cousin of Philip IV. The painting reflects with extraordinary precision one of his most prized suits of armor, made in 1606 by the so-called Master of the Castle, which is exhibited with the painting. A luxurious child-size suit from 1585 attributed to Lucio Marliani of Milan made for Philip III at the age of 7. Photo: Patrimonio Nacional, Madrid The production of armor declined in the 17th century because of the widespread use of firearms and declining popularity of jousting tournaments and pageants. Gradually, armor became disassociated from the rulers for whom it had been made. Instead of projecting an image of royal power, the armor in the collection of the Royal Armory became a resource for artists seeking elegant models for the armor they depicted in paintings of non-royal subjects. In his painting of an Old Testament scene from the Book of Judges, Jael and Sisera (c.1630), Pedro Núñez del Valle drew inspiration from two suits of armor in the Royal Armory, one that had been made for Charles V by Desiderius Helmschmid and another by the Italian armorer Bartolomeo Campi, both of which are on view. Campi's Roman-style armor of Guiobaldo della Rovere, Duke of Urbino (1546) exemplifies the Renaissance taste for armor all´antica and is the only complete surviving suit of its kind in the world. This renowned muscle-plated armor was made for the Duke of Urbino who presented it as a gift to Philip II. The Hapsburg line in Spain ended in 1700 with the death of Philip IV's son and successor in 1700. As the French House of Bourbon assumed the Spanish throne, the exhibition concludes with a portrait of a Bourbon king. Anton Raphael Mengs' Portrait of Charles III in Armor (c. 1761) depicts him as commander-in-chief. Dressed in armor and a general's sash, he holds the baton of command in his right hand, and wears a sword hanging from his belt and the symbol of the Golden Fleece around his neck. The painting is the last to portray a king of Spain in armor. 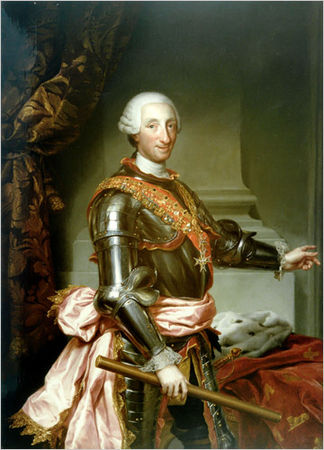 Commentaires sur 'The Art of Power: Royal Armor and Portraits from Imperial Spain' @ the National Gallery of Art, Washington