Of quadrangular section, each waisted side painted with birds and flowers, divided on six tiers at the corners with upright spouts shaped as open lion mouths, the tapering pinacle at the top terminating in a bulb, the lower two segments supported each on four crouching lions, some restoration. 98.3 cm. high. Estimate €2,000 - €4,000 - Price Realized €13,750 For the Roman Catholic market, the shaped back moulded in relief with the figure of Christ on the Cross flanked by Mary and St. John the Baptist below an aperture pierced between IHS and the dove of the Holy Spirit, all on a ground of foliage, the demi lune container moulded with the 'Baptism of Christ and a pair of angels, some restorations. 39 cm. high. Estimate €7,000 - €9,000 - Price Realized €7,500 The foliate-shaped plates identified each with the month on an oval cartouche, reserved on a figure scene in a landscape appropriate to the respective month, one restored, some losses to the glaze at the rims. 24.5 cm. diam. (12). Estimate €1,500 - €2,000 - Price Realized €5,000 A pair of Dutch Delft blue and white tobacco jars and brass covers. Circa 1780

The oviform body painted with a shaped cartouche, one marked 'No. 8 Rappe de Roosa, the other 'No. 16, Rappe de Stomer', flanked by calumet-smoking Indians among bails of merchandise and between stylised foliage centred at the top by rocaille, some rim chips and glaze frits. 29 cm. high (2) Estimate €2,000 - €3,000 - Price Realized €3,750

The baluster body painted with the figure of Mercury between bails of tobacco and boses of cigars, inscribed below 'De Mecurios' and 'No. 4@ within a cartouche, glaze frits to the edges. 37 cm. high. Estimate €1,000-1,500 - Unsold. A pair of Dutch Delft 'petit feu' polychrome and gilt models of cows. Circa 1750

Standing in mirror image with heads inclined slightly inwards on a green-glazed chamfered rectangular base with marbleized sides and moulded with shells and frogs, splashed with manganese red patches and enriched in petit feu technique and gilt with flower-heads and garlands, some restorations. 16.5 cm. high (2) Estimate €3,000 - €5,000 - Price Realized €3,750

A pair of Dutch Delft polychrome models of standing cows. Circa 1750-1770 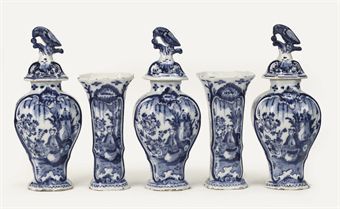 A Dutch Delft blue and white five-piece garniture. Second half 18th Century, marked in blue for De Porceleyne Claeuw above 150 A pair of Dutch Delft polychrome models of lions. Circa 1740

The naturalistically modelled lions reclining on a green-glazed grassy mound, in mirror image with heads inclined slightly inwards, the fur enhanced in underglaze-blue over white, one with restorations and minor loss to the glaze. 10 cm. wide (2). Estimate €2,000 - €3,000 - Price Realized €3,000

A Dutch Delft polychrome butter tub and cover. Circa 1780

Modelled naturalistically as a recumbent sheep in manganese red, on an oval base moulded in relief with foliage on a midnight blue ground, restored. 11.5 cm. wide. Estimate €1,500 - €2,000 - Price Realized €3,000 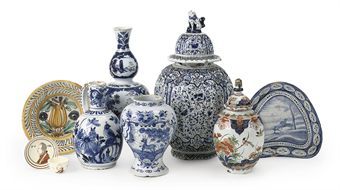 Of flattened octagonal baluster shape, each decorated to the front with a C-scroll panel in relief depicting a river landscape with houses on the banks, the domed cover with scroll finial, some restoration and loss to glaze. the jars 32.2 cm. high, the beakers 21.5 cm. high (5) Estimate €1,500 - €2,000 - Price Realized €2,000 Comprising three baluster jars and covers and two beaker vases, of flattened hexagonal form, painted to the framed frontal panel with a farmer working the land, the domed cover surmounted by a parrot picking a berry, some restorations and chips. the jars 33.2 cm. high, the beakers 22.6 cm. high (5) Estimate €1,500 - €2,000 - Price Realized €1,750