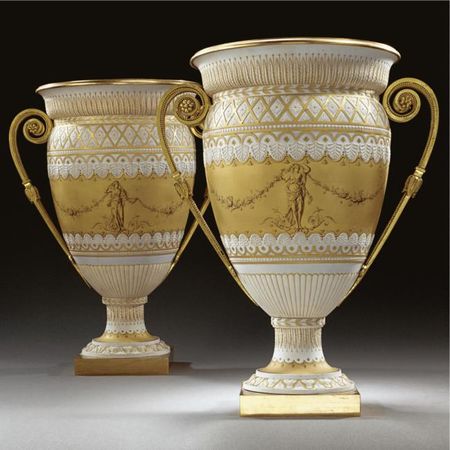 NOTE: The rarity of these magnificent vases is confirmed by the fact that no other similar type of decoration is recorded in the literature.

The plaster model of the Vase Cordelier à ornaments is preserved in the Sèvres museum, and the model is thus listed in the oldest surviving inventory, begun in 1817-see fig. 1, which has exactly the same reliefs as those on the offered vases. This form of vase first appears under the name Vase Cordelier in 1804, though its earlier appellation is not known.

The archives of the Manufacture de Sèvres reveal that only one pair of vases of this model was executed in 1788. However, a pair of lilac-ground Vases Cordelier of the same form dated to 1790, decorated with grisaille landscapes but without the moulded foliate and gadrooned borders, and with similar gilt-metal mounts, is in the Sèvres museum (MNC 26,406 1-2), and published by Marie-Noël Pinot de Villechenon, Sèvres Porcelain from the Sèvres Museum 1740 to the Present Day, London 1997, p.47, no.46 (illustrated)-see fig. 2.

The painters that were active at the Manufacture de Sèvres are known to have a particular way of signing their pieces, ranging from clearly marking their initials, to applying in the subtlest of ways their mark. So did the decorator, Pierre-Louis-Philippe Armand, interlace the two LL Sèvres marks with dots at the intersections in such a way that we can establish these marks with his craftsmanship and execution. The interlaced LL mark on the present pair of vases corresponds with his hand. Upon consulting the "Régistre de Paiements des Peintres" , Armand Jeune has been paid a sum on 26 November 1788 for the execution of "deux vases biscuit bas relief et dorure (see fig.3 ). This more than likely corresponds with the present pair of vases. Furthermore, the "Régistre d'Enfournement pour l'Année 1788" reveals that "Deux Vases en Bas Relief et Or, Armand" went through the kiln process. Armand was one of the most highly paid painters at Sèvres, hence reflecting his highest standard of craftsmanship.

We are indebted to Cyrille Froissart for his archival research and to Tamara Préaud, Manufacture nationale de Sèvres, for providing the illustration of the model of the Vase Cordelier.