'Corot to Monet, A Fresh Look at Landscape from the Collection' @ The National Gallery London

'Corot to Monet, A Fresh Look at Landscape from the Collection' @ The National Gallery London 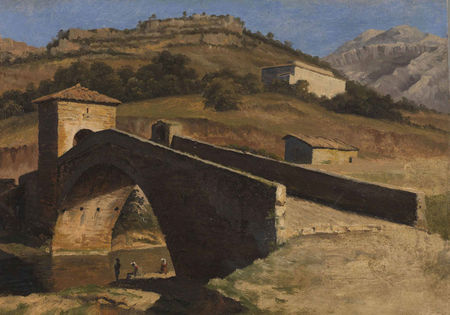 Attributed to Jean-Antoine Constantin, Bridge at Subiaco, about 1777. © The Gere Collection, on long-term loan to the National Gallery

LONDON.- Where did these Impressionist ideas come from? In seeking to capture the transient effects of nature, the French Impressionists were indebted to a tradition of painting in the open-air which had thrived in Western Europe for almost a century.

Drawing on the National Gallery’s extraordinary collection of 19th-century French landscapes, 'Corot to Monet' charts the development of landscape painting from the late 18th century to the year of the first Impressionist exhibition, 1874.

The exhibition features some 90 small-scale paintings by the major artists of this genre. Fresh perspectives on familiar National Gallery works and new juxtapositions reveal the extraordinary achievements of these early plein-air painters and their far-reaching influence on the Impressionists.

At the end of the 18th century, artists from all over Europe were congregating in Rome, before setting out to paint in the Campagna and other picturesque locations, including the magnificent cascades at Tivoli.

The exhibition opens with some of the finest works of these pioneers of plein-air painting, including Jean-Baptiste-Camille Corot, Pierre-Henri de Valenciennes and Simon Denis.

Many of these works are drawn from the renowned Gere Collection, entrusted to the National Gallery on long-term loan in 1999. Highlights include Corot, 'The Roman Campagna, with the Claudian Aqueduct', probably 1826, which, in a single layer of paint, perfectly captures a broad, sunlit landscape hung with majestic clouds.

By the first half of the 19th century, artists in France, including Corot and Théodore Rousseau, were also sketching their native scenery to great effect. Rousseau’s 'The Valley of Saint-Vincent', 1830 – purchased from the Paris sale of Degas’s private collection in 1918 – captures the wild, unspoilt nature of the Auvergne with long, fluid brushstrokes.

In the western suburbs of Paris about 1820, Paul Huet was inspired by the grandeur of the 'Trees in the Park at Saint-Cloud', which he described as an ‘enchanted site…whose every bush I knew’.

This section of the exhibition features a jewel-like masterpiece by the English-born artist, Richard Parkes Bonington, who spent most of his short life in France. During a tour to the Picardy coastline around 1825, the young artist completed this remarkable coastal scene of 'La Ferté', confidently realising sand, sea and sky with broad sweeps of his brush (Accepted by HM Government in lieu of Inheritance Tax and allocated to the National Gallery pending a decision on permanent allocation, 2007).

Special attention is paid to the so-called Barbizon School, named after a small French town in the Forest of Fontainebleau where landscape artists including Rousseau, Jean-François Millet and Narcisse-Virgilio Diaz de la Peña gathered to work in the huge expanse of woodland, meadows, marshes and gorges. These pictures evoke Victor Hugo’s conviction that ‘A tree is an edifice, a forest a city, and among all the forests, the Forest of Fontainebleau is a monument.’

Diaz de la Peña’s 'Sunny Days in the Forest', 1850–60, offers a lively celebration of spring skies and rich foliage, completed with an extraordinary eye for detail. A major highlight here is Corot’s 'The Four Times of the Day', about 1858 (on loan from the Loyd collection since 1997), completed for the studio of fellow Barbizon artist, Alexandre-Gabriel Decamps. Corot completed all four panels in just a week, imbuing these imaginary compositions with personal reminiscences of Italy.

Late works by Corot and a selection of beach scenes by Eugène Boudin reveal the very tangible influence these artists had on the nascent Impressionists. Indeed, they hang alongside and in constant dialogue with Monet’s 'The Beach at Trouville', 1870, and other early works. The captivating 'Beach at Trouville' focuses on his new wife and a friend, possibly Boudin’s wife, sat beneath their umbrellas on the beach. The speed and bravura of his handling of paint make this a seminal work of its genre. The sea breeze which agitates the distant flag in the picture left a still more physical presence on the canvas – grains of sand lodged in the artist’s wet paint.

Not long after, Monet made his first visit to London, fleeing from the Franco-Prussian War. In the bustling Victorian metropolis, he found inspiration in its parks and the river Thames. The final section of the exhibition examines two iconic views of London by Monet and fellow refugee, Charles-Francois Daubigny. Monet’s 'The Thames below Westminster', 1871, captures a sense of sublime stillness looking towards the recently completed Houses of Parliament and newly built iron Westminster Bridge. In 'St Paul’s from the Surrey Side', 1871–3, Daubigny peers through the leaden sky of a modern industrial city, delicately capturing the plume of smoke from a train over Blackfriars Bridge.

Painted on small-scale wooden panels or paper, the landscape oil sketches of the late 18th and early 19th centuries were often piled in the corner of the artist’s studio, little valued and largely ignored until generations later. Drawing on one of the finest collections of its kind in the world, Corot to Monet celebrates the rediscovery and re-evaluation of these remarkable works of art.

A study room is set aside in the exhibition space where visitors can further investigate 19th century landscape paintings online and in relevant publications. Of special interest online are seven comprehensive catalogue entries on paintings by Corot from the forthcoming catalogue of the National Gallery’s 19th-century paintings, previewed here for the first time. Pierre-Henri de Valenciennes, Cow-Shed and Houses on the Palatine Hill, 1782-1784. © The Gere Collection, on long-term loan to the National Gallery 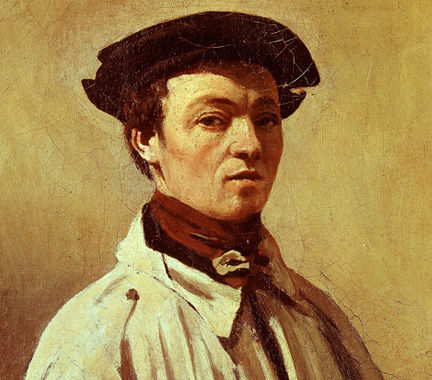 Born in Paris on 17 July 1796, Corot was the son of a cloth merchant and a milliner. After an education at the Collège de Rouen and two abortive apprenticeships with drapers, he was given the financial freedom at the age of 26 to devote himself to painting. Read more http://www.nationalgallery.org.uk/artists/jean-baptiste-camille-corot

National Gallery's curators and scientists have made stunning new discoveries about seven paintings by Jean-Baptiste-Camille Corot, a 19th-century artist who was a huge influence on the Impressionists, particularly through his use of light on landscape. Read latest research http://www.nationalgallery.org.uk/paintings/research/corot-to-monet-new-research/. 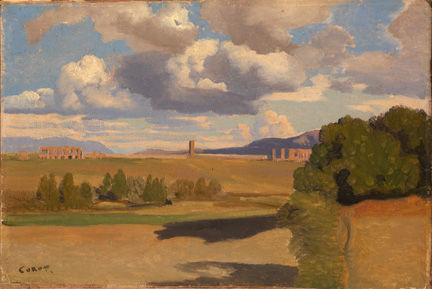 Jean-Baptiste-Camille Corot, 'Peasants under the Trees at Dawn', about 1840-5. Oil on canvas, lined, 27.3 x 38.8 cm (visible surface; brown paper covers the turnover edge and obscures up to 0.5 cm of the front of the canvas). Signed bottom right: COROT (slightly worn). © The National Gallery 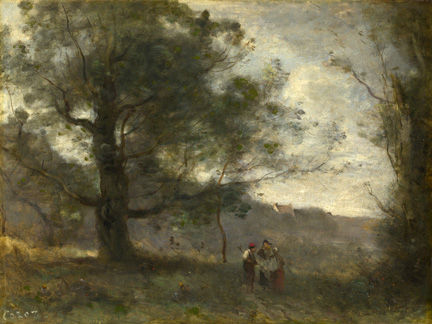 Jean-Baptiste-Camille Corot, 'The Oak in the Valley', 1871. Oil on canvas, lined, 39.8 x 52.8 cm. Signed bottom left in white paint: COROT (followed by a dash in white paint which could possibly be a full stop). © The National Gallery Commentaires sur 'Corot to Monet, A Fresh Look at Landscape from the Collection' @ The National Gallery London