Teotihuacan Could Have Been Governed by 4 Seigniors

Teotihuacan Could Have Been Governed by 4 Seigniors 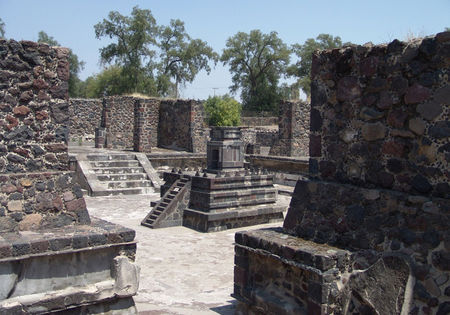 According to Manzanilla Naim, researcher at the National Autonomous University of Mexico (UNAM), Teotihuacan was the 6th larger city of the world in its time. Photo: Mauricio Marat/INAH.

MEXICO CITY.- A century after modern exploration of Teotihuacan began, debate about the Mesoamerican city focuses on its government system, which according to a line of investigation supported, among other experts, by Dr. Linda Manzanilla, could have had a corporative character and not have been ruled by dynasties, as was thought.

“The strength of Teotihuacan state might have been exaggerated; it was weak because it was based on a corporative utopia very hard to consolidate” declared the researcher at the inauguration of the master conferences series around the 100 years of archaeological studies at Teotihuacan, presented at National Museum of Anthropology (MNA) within the frame of the 70th anniversary of the National Institute of Anthropology and History (INAH).

According to Manzanilla Naim, researcher at the National Autonomous University of Mexico (UNAM), Teotihuacan was the 6th larger city of the world in its time, reaching a 20 square kilometers area. During 8 centuries it maintained its influence over Mesoamerica, probably reaching during it peak (350-550 AD) 125,000 inhabitants.

The hypothesis raised by the multidisciplinary team to which the Institute of Anthropological Investigations (IIA-UNAM) belongs, points out to Teotihuacan being divided by 4 great sectors ruled by the same number of seigniors whose only representation known to date is the Las Colinas vase discovered by Sigvald Linne in 1930.

“This 4 city sectors were represented by lineages of birds of prey to the northwest, jaguars and Storm deity to the northeast; of serpents to the southeast and canines or coyotes to the southwest” declared the UNAM doctor at her conference.

Linda Manzanilla, also a member of Colegio Nacional, one of these rulers could have belonged to an ethnic group different from Teotihuacan one, possibly Popoloca, since they operated commercial network that supplied Teotihuacan.

Teotihuacan co government approach raised based on a lecture she imparted in 1993 at Dumbarton Oaks Research Library and Collection of Harvard University, in United States, but it gained more interest in 2001 when INAH, UNAM and National Polytechnic Institute (IPN) experts began participating.

“We are trying to demonstrate there was co-government in Teotihuacan. First we need to locate at the neighbor centers such as Teopancazco, which noble class performed as administrator; and then, who worked at Xalla Palace, where the 4 seigniors gathered”.

“Other important task is monitoring the Sun Pyramid with a muon detector to discard co-rulers are buried there: no royal tombs have been detected in Teotihuacan to present”, she explained.

Until now, explained Linda Manzanilla, the theory of the city being controlled by a single dynasty prevails, being its main advocated Ruben Cabrera and Saburo Sugiyama. “Nevertheless, my proposal is that there was a corporative structure not only in dwelling units, but in the city’s government”.

“This would be unique in Mesoamerica, but Indo Valley civilization, from Pakistan, was structured this way. Corporative structures are exceptional in the region, but they exist in other parts of the world.”

Teotihuacan represents the 4 directions Mesoamerican cosmogram. The 4 petal flower glyph (that possibly represents the site, according to Alfredo Lopez Austin), materializes in 2 places: Xalla Palace and one of the city tunnels that reached a chamber inside Sun Pyramid.

Commentaires sur Teotihuacan Could Have Been Governed by 4 Seigniors