“It’s hard to think of contemporary culture without the influence of Pierre et Gilles, from advertising to fashion photography, music video, and film. This is truly global art.” Jeff Koons.

Pierre et Gilles are among the most influential artists of our time. In their complex, multilayered images, they quote from art history, transgress traditional moral codes, and experiment adeptly with social clichés. Their painterly photographic masterpieces exert an intense visual power that leaves the viewer spellbound.

Over the last thirty years, Pierre et Gilles have created photographic portraits of numerous celebrities including Marc Almond, Mirelle Mathieu, Catherine Deneuve, Serge Gainsbourg, Iggy Pop, Jean-Paul Gaultier, Nina Hagen, Madonna, and Paloma Picasso. They work almost exclusively in an opulently furnished studio, where their subjects are costumed lavishly and placed before three-dimensional backgrounds. Pierre photographs the model, and Gilles retouches and hand-colors the print. The reproducible portrait is rendered unique through painting, which highlights each detail with carefully selected materials and accessories.

As only venue in Germany, C/O Berlin presents the exhibition as the first of Pierre et Gilles in fifteen years. The show comprised a total of 80 unique large-format works – from their early photographies of the 1970s to the brand new pictures that were never shown in public before.

The artist duo Pierre et Gilles (b. 1950 and 1953, respectively) have been living and working together since 1976. Influenced by Pop Art, Gilles first painted a photograph by Pierre in the year 1977. This form of collaboration between photography and painting became the trademark of their work, which has remained unique and has exercised a defining influence on contemporary photography. 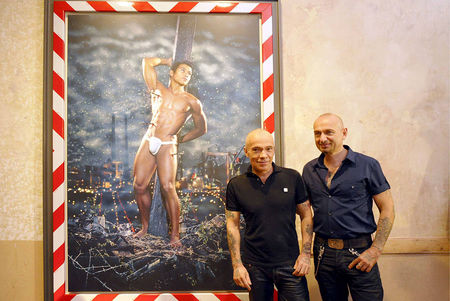 French artists Pierre Commoy, (l), and Gilles Blanchard, (r), pose with one of their works in Berlin. Photo: EFE/Hannibal Hanschke