A collection of Peking glass snuff bottles and a necklace

A collection of Peking glass snuff bottles and a necklace Both of flattened globular form, one with a snowflake background, the other of milky white color, each with clear watch glasses on both sides, covering hand-painted panels, one bottle with an animal motif, the other with scenes of figures and rivers; each bottle with overlay mask and mock ring handles on the sides. 6cm high. Estimate: $600 - 800 The first a pear-shaped bottle with a snowflake ground, overlaid in cranberry red to form an archaistic bronze design; the second a flattened globular bottle, overlaid in darker red with the design of 'Muwang ba jun' (Muwang's eight horses); stoppers. 6.8 and 5.5cm high. Estimate: $600 - 800 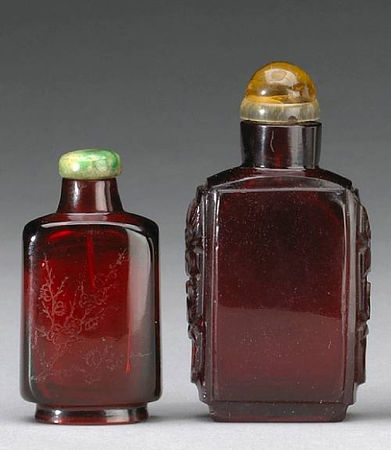 Both of rectangular form, the first with an oval foot and slightly tapering neck, incised on one side with two poetic lines, reversed with branches of blooming prunus, the base incised with Kangxi nian zhi; the second with cusped edges, the main sides undecorated, with two faux animal mask handles; stoppers. 6 and 7.2cm high. Estimate: $600 - 800 The first two each with a snowflake background overlaid with cobalt blue glass, one carved with 'One Hundred Antiques', the other with the eight Buddhist emblems; the third a transparent yellowish green bottle overlaid with carved blue 'ribbon'; all with stoppers. 6 to 6.8cm high. Estimate: $600 - 800