Visitors to the Museum are accustomed to viewing peaceful, benevolent Buddhist deities, such as smiling Buddhas deep in meditation or serenely blissful bodhisattvas beckoning to us. But scattered throughout the Asian galleries is a striking assortment of demonic, wrathful deities—figures that bare fangs, drink blood, wear garlands of severed heads or are surrounded by fiery haloes. Divine Demons: Wrathful Deities of Buddhist Art, an intimate exhibition of paintings, sculptures and ceremonial ritual objects from the Museum’s permanent collection, explores this fascinating theme.

As embodiments of the “demonic divine,” wrathful deities serve as protectors and guardians of the Buddhist faith. Mahakala is an especially fierce deity who militantly tramples a figure that represents obstacles. Resplendently adorned with a tiara of skulls, writhing snakes and a multitude of spiritual weapons, he is one of the most important protectors of the religion. Hayagriva has three faces, each with a wicked expression, and he is depicted with three horse heads emerging from his flame–like hair. A defender deity, Hayagriva is able to control snakes by his neighing; he tramples on serpents and vanquishes them.

Also included in the exhibition are numerous ritual implements, such as those held by many of the deities in the paintings and sculptures. A dagger known as a phurbu, a type of stake or peg, is a symbolic weapon wielded by priests during Buddhist rituals to expel demonic forces. 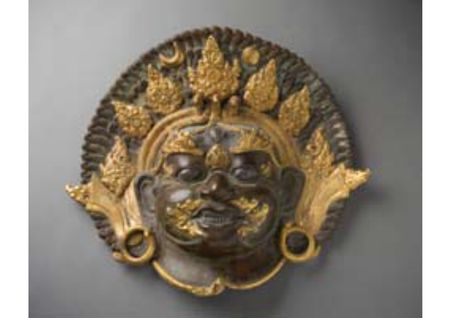