About and shopping of black jadeite

About and shopping of black jadeite 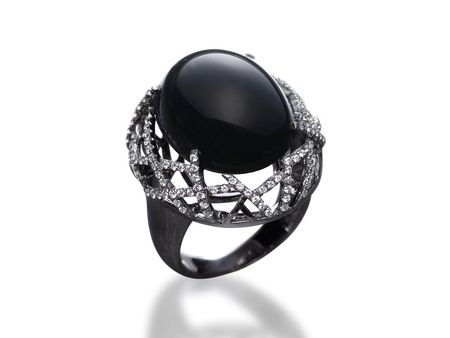 Black Jadeite. There are in fact two types of so-called black jadeite. One of these comes from Burma, and is really gray rather than black, and the other comes from Guatemala, and is truly black..

Ou Yang and Hansheng (1999: 417-418) comment in regard to Burmese black jade that "currently the term 'black jade' may include different types of pyroxene jades and is potentially confusing for the trade." Since first appearing on the market in Burma in the mid-1990s, this type of jadeite has been used to make various forms of jewelry in Hong Kong and Taiwan, but it has not proven to be very popular. The color of this type of jadeite tends to be grayish-black rather than pure black. Since the color is said to be similar to that of black-skinned chickens, in Hong Kong it is sometimes referred to as "black-skin-chicken jadeite". It is usually found in the vicinity of rivers in the form of boulders and is relatively rare.

Ou Yang and Hansheng (1999: 418-419) describe "black jade" from Burma as being "opaque (fine grained) to translucent (coarser grained) with a vitreous lustre except in a few areas where it tends towards an oily lustre; fresh and well-polished surfaces have a vitreous lustre." Unlike black nephrite, on polished surfaces black jadeite can exhibit star-like flashes in reflected light. Ou Yang and Hansheng (1999: 419) report that its hardness on the Moh's scale is about 7, its specific gravity ranges from 3.325 to 3.333, and its RI is 1.653-1.665. It is inert under both long-wave and shortwave ultraviolet light. In terms of its composition, the authors report (page 419) that it is "essentially monomineralic, consisting of 95% jadeite and about 5% accessory minerals and black pigments."

The jadeite belongs to the jadeite-omphacite-diopside pyroxene series. The color is derived from the presence of black or dark opaque dust-like materials that are associated with minute inclusions that are distributed throughout the stone. The inclusions are comprised of metallic oxides and sulphides, amorphous carbon, organic salts, water, CO2, and various hydrocarbons.

In the case of Guatamalan "black jade", it was used in Prehispanic times to make celts and other artifacts. It is presently being used by lapidaries in Guatemala City and Antigua, Guatemala, to make various types of jewelry. Harlow and Donnelly (1989) describe its petrological features in Guatemala and Garza-Valdés (1993: 113) describes its chemical composition and related properties:

Aegirine-augite (chloromelanite)-rich rocks, or black jade, are metamorphic rocks with a fine-grained-to-cryptocrystalline texture. The color is given by the pyroxene aegirine-augite (chloromelanite) and by taramite, a sodic-calciic amphibole  (NaCaNaMgFe22+.[AlFe3+]2Si6Al2O22[OH]2)... The amphibole is markedly pleochroic in blue, brown, and violet. This rock also contains titanite, albite, analcite, grossular, and white mica.

Harlow (1993: 23) says that black jade in Mesoamerica "resembles basalt" and comments that "it is very durable... it takes a very good polish and shows little grain definition." Anna Miller (2001: 29) quotes Fred Ward about this black jadeite: "Black jadeite from the Moragua Valley area...represents the creamiest, richest, and best black jadeite in the world, far exceeding Burma's darkest, which is gray and can only be sold as charcoal." By Kim Be Howard, A.G. (C.I.G.)

Commentaires sur About and shopping of black jadeite