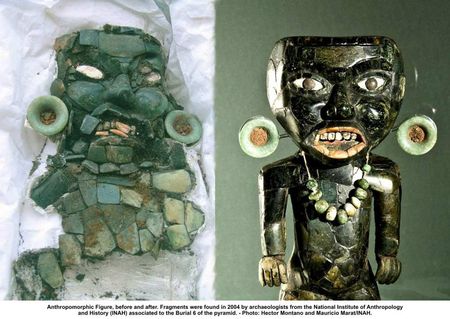 MEXICO CITY. - More than 300 greenstone tiles found inside the Moon Pyramid originated a human sculpture that gives testimony of the esthetic cannons of the ancient Teotihuacan culture. The effigy is one of the emblematic pieces of the exhibition “Teotihuacan. Ciudad de los Dioses” (Teotihuacan, City of Gods), open until late August in the National Museum of Anthropology (MNA). Fragments were found in 2004 by archaeologists from the National Institute of Anthropology and History (INAH) associated to the Burial 6 of the pyramid. Specialist thought the pieces were part of a mask.

Dated near 300 AD and made out of serpentine, reconstruction of the “Anthropomorphic Figure” was an arduous work directed by restorer Laura Filloy Nadal, from the MNA Conservation Laboratory.

The figure also has fragments of calcite, dolomite, jade and obsidian that form eyes, lips, and jewelry such as earpieces and necklace.

Restoration of the representation of a high rank character or warrior began with photographic register in situ of the pieces in order to specify the place of each piece. Fragments have different sizes, from a millimeter to 3 centimeters that formed a torso, arms and a pair of earpieces. Carbonized fragments that might have been a support were also found.

“Tiles corresponded to the frontal part of a sculpture” specified Filloy, adding that tiles’ morphology varied from fragments of curved to straight cuts, with convex, concave or flat surfaces. Edges were cut on the bias to be assembled.

Using 3 dimensional images, an preliminary effigy was modeled that later was made out with plasticine; this allowed to determine the place of each piece. A 31 centimeters high full-body human figure resulted, and then a rigid resin cast was created to glue on each fragment with a transparent adhesive.

The final touch consisted in the general polish of the sculpture, mentioned Laura Filloy, after declaring that aluminum tubes were installed inside the structure to give it stability.

Another sculpture restored by INAH to be exhibited at the Teotihuacan show is the “Xalla Captive”, the greatest anthropomorphic representation of the exhibit, was carved in marble and gives account of ritual and intentional destruction performed by ancient Teotihuacan people, since it presents burns and cuts.

The exhibition will be open until the end of August 2009 at the National Museum of Anthropology. The virtual visit is available at www.inah.gob.mx/ciudaddelosdioses.