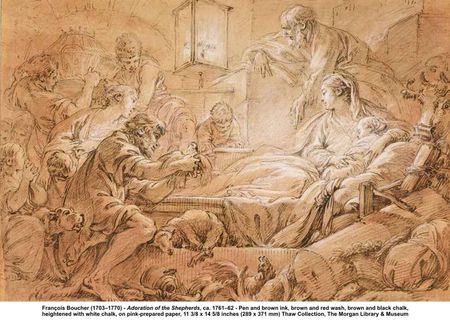 NEW YORK, NY.- Few eras in French history witnessed the same degree of radical social and political changes as those of the eighteenth century. The efflorescence of the ancient régime and its eventual downfall provide the backdrop to a period of remarkable artistic vitality and variety that subtly chronicled the many changes taking place in France. It is this dynamic period in French art history that is the subject of Rococo and Revolution: Eighteenth-Century French Drawings. On view from October 2, 2009, through January 3, 2010, the show features more than eighty exceptional drawings almost exclusively from the Morgan’s renowned holdings from this era. Artists represented in the exhibition include Antoine Watteau, Jacques-Louis David, François Boucher, Jean-Honoré Fragonard, Claude Gillot, Nicolas Lancret, Hubert Robert, Pierre-Paul Prud’hon, Anne-Louis Girodet, and Pierre-Narcisse Guérin, among others.

The royal court and wealthy Parisian merchants defined the artistic sensibility of the century’s early decades. This exuberant style, called Rococo, eventually assimilated the burgeoning classicism of the Enlightenment. Later, with the triumph of “reason” and the stirrings of the Revolution, a more formally austere Neoclassicism developed.

The Rococo initially flourished during the waning years of the reign of Louis XIV (r. 1661–1715), and serves as a starting point for the exhibition. Works by artists active at the French Academy in Rome during its greatest years, coinciding with the rule of Louis XV (r. 1715–1774), document drawing’s robust role in artistic practice during mid-century. The exhibition concludes with works executed during the last decades of the ancien régime, under Louis XVI (r. 1774–1792), and the onset of the Revolution, as artists embraced the rigorous Neoclassical style. Contextually, the exhibition also touches on concurrent developments in Parisian patronage, fashion, theater, and literature.

“The Morgan’s collection of eighteenth-century French drawings is truly remarkable for its quality and depth,” said William M. Griswold, director of the Morgan. “This survey offers some of the finest works in the collection, distinctive as individual sheets of superb quality and reflective as a whole of changes in tone, temperament, and subject matter, as French art and society moved in dramatic new directions.” During the opening years of the eighteenth century, academic traditions yielded increasingly to a preference for spontaneity, charm, and subjects that celebrated the pleasures of love and everyday life. The first and greatest master of this new sensibility, later dubbed the Rococo, was Antoine Watteau (1684–1721). Among the several Watteau drawings in the exhibition is a drawing of a seated young woman executed in trois crayons—a technique revived by the artist that would remain popular throughout the eighteenth century in which red, black, and white chalks are used to produce images of striking vivacity and immediacy. The exhibition also includes a lively pair of chalk figure studies by Nicolas Lancret (1690–1743), Watteau’s closest contemporary

François Boucher (1703–1770), who succeeded Watteau as the most fashionable Rococo painter, was a prolific draftsman, once boasting that he had produced some 10,000 drawings. He favored a drawing style that emphasized sinuous contours, exploiting Watteau’s technique of using multiple chalks. Boucher’s technique and mastery of a variety of media are seen to brilliant advantage in Adoration of the Shepherds, a richly worked, tender Nativity scene; Four Heads of Cherubim, a quintessential study of cherubic heads for a painting; Thatched Mill Cottage and Shed with Two Trees at the Edge of a Stream, a picturesque landscape; and the sumptuously decorative Design for Frontispiece.

Drawings by Boucher’s contemporary and rival—and a key figure at the French Academy in Rome—Charles Joseph Natoire (1700–1777), include a dynamic figure study of a Camel Driver, and a pair of sheets depicting the picturesque views from the upper and lower portions of the cascade at the Villa Aldobrandinini, Frascati.

Jean Honoré Fragonard (1732–1806), Boucher’s and Natoire’s protégé, was the last great artist of the ancien régime. His works are notable for their engaging subject matter and seemingly effortless execution. Two attractive red chalk drawings of a young woman seated in a garden are from a series of sketches he produced of fashionably dressed young women. Two lush landscape drawings by Fragonard—one in gouache, Interior of a Park: The Gardens of the Villa d’Este and the other in brown ink washes, Landscape, with Flock and Trees—document his expert command of the brush and knowledge of the old masters.

Gabriel de Saint-Aubin (1724–1780) worked almost exclusively as a draftsman and printmaker and was the great “society reporter” of pre-Revolutionary Paris. The show includes his small, vivid sketch of a demonstration in the Hôtel des Monnaies by the chemist Balthasar Georges Sage. Also by Saint- Aubin is a lively drawing of a ballet dancer dressed as Momus, the god of banter, holding a scroll advertising costume designs for a ball at the royal residence of St. Cloud. 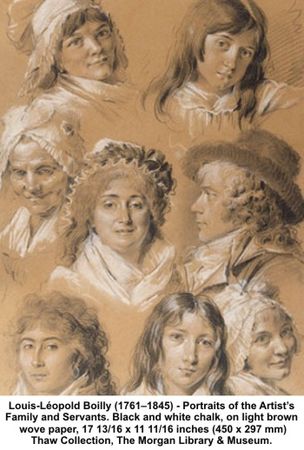 The Enlightenment informed literature and the fine arts throughout the century. One of the most influential thinkers was Denis Diderot (1713–1784), author of the Encyclopédie. He was an advocate of rationalism and embraced the resurgence of classical history themes. In his reviews of the annual exhibitions known as the Salon, he reserved highest praise for the work of Jean-Baptiste Greuze (1725–1805), whose life-size portrait of the philosopher is included in the show.

Jacques-Louis David (1748–1825), whose deft diplomacy enabled him to survive the Revolution and its aftermath, was France’s preeminent Neoclassical artist. David broke away from the Romanticism of his early works to define the new austere Classicism, both formally and iconographically. The exhibition features an album by David containing eighty-three sketches, ranging from studies of antique sculpture to Italian landscapes, which was assembled in his studio by his sons. David’s sketches were an important source of inspiration for his paintings and document his close study of art and nature. A drawing of a quintessential Revolutionary subject, the Roman Brutus sentencing his sons to death, exemplifies the artist’s paradigmatic Neoclassical style.

David’s influence on eighteenth- and early-nineteenth-century draftsmanship was profound. Among his many pupils and followers was Anne-Louis Girodet (1767–1824). Girodet’s luminous and dramatic scene Phaedra Confesses Her Love for Hippolytus to Oenone was produced as an illustration to a volume of Racine’s classical themed plays, which were revived and embraced by the Neoclassicists.

The turbulent years of the Revolution (1789–1799), the heroic years of the First Empire (1804–1815), and the corresponding shift in patronage are reflected in the work of Pierre-Paul Prud’hon (1758–1823). Prud’hon’s close association with Napoleon and Josephine is evident from his numerous portraits of members of the imperial household throughout his career. Prud’hon’s sensitive portrait of a pensive Josephine and a depiction of the lush garden at her home at Malmaison are among the works produced for the empress during this period.

History of the Collection
Begun in the early 1900s by Pierpont Morgan, the Morgan’s collection of French drawings is regarded as one of the finest and most carefully selected in America. The largest number of drawings are from the eighteenth century—the golden age of French draftsmanship. There are also rare examples from the fifteenth century; a large group of drawings by French Mannerists of the sixteenth century; important works by the great seventeenth-century Classicists, above all Poussin and Claude; and works by many of the major artists of the nineteenth century, from Ingres to Cézanne. Visit : www.themorgan.org/