The art gallery of the Counts Harrach was founded in a period when culture was flourishing in the estates of Austria. The three members of the old family responsible for the largest and most beautiful part of the collection, Counts Ferdinand Bonaventura I, Alois Thomas Raimund and Ernst Guido, expressed their interest in the visual arts by supporting contemporary artists and collecting older works in the time of Leopold I, Karl VI and Maria Theresia. During the time of Francis II, Count Johann Nepomuk Ernst extended the gallery considerably with a fourth large section which displays the development of the collection in the early nineteenth century.

Count Ferdinand Bonaventura I (1636–1706), Head Chamberlain for Kaiser Leopold I, founded the gallery. He held the important office of Ambassador at the Spanish Court in Madrid more than once (1673-76, 1697-98). There he was able to acquire the works of Spanish masters which are to be seen in the gallery today. But he also collected works by contemporary Italian masters such as paintings by Luca Giordano, whom he knew personally. Count Alois Thomas Raimund (1669–1742), the son of Count Ferdinand Bonaventura, held the office of Viceroy of Naples during two periods after 1728, and there he acquired the unique collection of major Neapolitan baroque painters.

During the 1750s, the third great collector, Count Ernst Guido (1732–1783), had his agent in Rome, the Abbé Guiseppe Dionigio Crivelli, order pictures exclusively from the finest artists. The resulting collection exemplifies Roman art of the mid-eighteenth century with works of the very best quality.

The architectural pieces of Pannini and the landscapes of Manglard, Vernet and Bonaria form a unified group incorporating the ideas that inspired art shortly before the triumph of strict Classicism in Rome. From 1783 Count Johann Nepomuk Ernst enriched the gallery with a large number of pictures that clearly demonstrate the new collecting principle: the presence in the gallery of Dutch landscapes on the one hand and early Italian paintings on the other is attributable to his artistic interests.

Count Franz Ernst also managed to bring the entire painting collection together in the gallery rooms of Palais Harrach on the Freyung, in central Vienna. The arrangement of the gallery was altered several times; in 1884 and 1903 more pictures were transferred to the gallery from the Harrach country palaces. In 1944 the Palais Harrach on the Freyung in Vienna was severely damaged. In spite of the great difficulties experienced in the following years, the gallery was restored by Stéphanie Countess Harrach in the palace which was reconstructed in 1946–1959 in accordance with its traditional plans. In 1966 a decision was taken to renovate Rohrau Castle and in 1970 the collection opened its doors there. The prime principle of this design was to avoid a sterile museum atmosphere as much as possible and to create a unity between an inhabited country house and the organic collection. A series of ten small and large rooms, including the chapel and a hall 34 metres long were available for installing the gallery. The intention was to create exhibition rooms but to merge the space with the paintings into a unity of harmony and aesthetics, corresponding to the interior of a baroque building where a collection was housed. 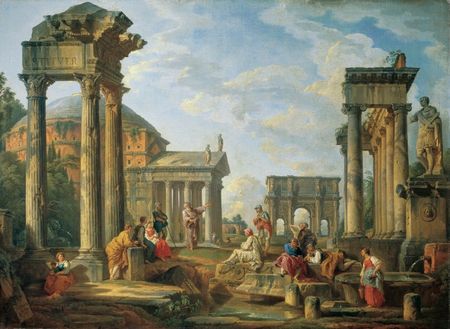 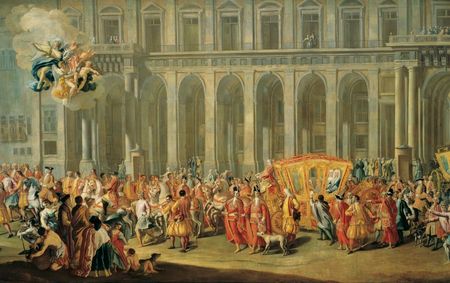 Nicola Maria Rossi (1690–1758), Excursion of the Viceroy of Naples, Aloys Thomas Count Harrach, from the Palazzo Reale in Naples, c. 1730. Oil on canvas 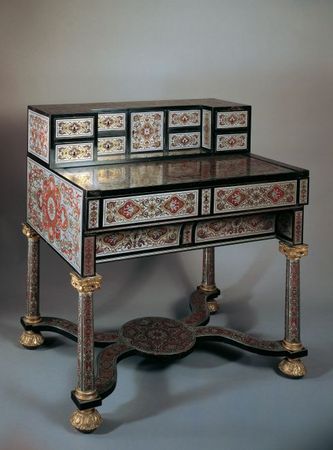 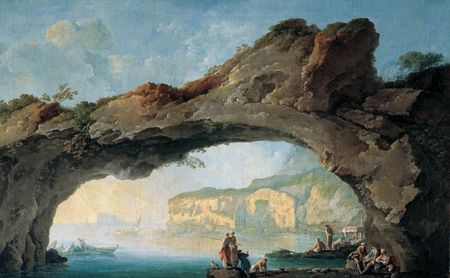