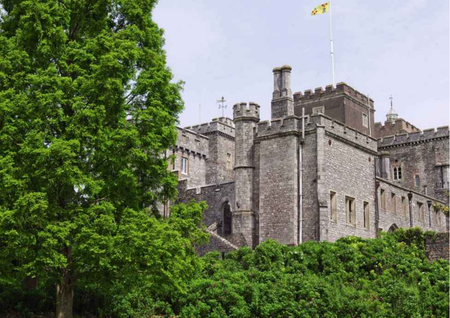 LONDON.- Sotheby's London announced the sale of fine furniture, paintings and works of art from two great British houses, Powderham Castle and Seaton Delaval Hall, in its New Bond Street galleries on 29th September 2009. The selection of 130 lots from Powderham Castle in Devon, the ancestral home of the Earls of Devon, includes Georgian Furniture, Early British Pictures, Silver and Ceramics, and together with the 70 lots from the private rooms of Seaton Delaval Hall, Vanbrugh’s masterpiece close to the Northumberland coast and the seat of Lord Hastings, is expected to raise a combined total of £1.5 million.

Harry Dalmeny, Deputy Chairman Sotheby’s UK, responsible for British House Sales, comments: “We are honoured to offer works from these two noble seats in our House Sale at Sotheby’s New Bond Street. This fascinating auction offers collectors the exciting possibility of acquiring pieces from two famous English homes, each built and furnished by the family that still lives there. Architects and designers of the calibre of Vanbrugh, Wyatt, Adam and Channon ensure this sale will be unmissable for devotees of the English Country house.”

Seaton Delaval Hall, Northumberland
The sale will also include selected pieces from Seaton Delaval Hall, a theatrical English baroque masterpiece built between 1718 and 1728 for Admiral George Delaval. There have been Delavals at Seaton since 1095, Norman conquerors who became Northumbrian squires. The house is considered to be the last and finest design by Sir John Vanbrugh, architect of Blenheim Palace and Castle Howard. Vanbrugh approved of his freespending patron, who he thought “very gallant in his operations, not being disposed to starve the design at all,” though neither architect nor patron lived to see the house completed. It was inherited by his nephew Francis Delaval and the scandalous behaviour of his children became notorious - Seaton Delaval saw bull-baiting and dancing bears, theatricals and political corruption. Few houses in Britain can have seen such wild parties. The Delaval line came to an end in 1814 and Seaton Delaval was inherited by a cousin, Sir Jacob Astley, whose grandson became Baron Hastings in 1841. A fire consumed the main part of the house in 1822 and it was not until 1946 that the 22nd Lord Hastings, who died in 2007, restored the house as the main family home. It is now proposed that the house and the majority of its contents will be transferred to the nation in lieu of tax, with the National Trust becoming the new owners. Items included in the sale are from the private apartments, until recently occupied by the late Lord Hastings, which cannot viably be included in the display of the hall once open to the public.

The sale in Sotheby’s New Bond Street galleries will include 18th-century English furniture, European and oriental ceramics, silver and paintings, including art from the private apartments in Vanbrugh’s great Baroque masterpiece. Among the furniture is an important pair of Queen Anne giltwood wall mirrors, circa 1715, recorded at Seaton Delaval in an Inventory of 1755, estimated at £40,000-60,000, and a George III giltwood and marble demi-lune side table, circa 1755 and possibly from the family’s London house designed by Robert Adam on Hanover square, estimated at £7000-10,000. The group includes some very fine porcelain, including a Vincennes ecuelle, cover and stand, circa 1754, estimated at £15,000-20,000 and a Meissen tea and coffee service, circa 1730, estimated at £20,000-25,000. An impressively large pair of Chinese ‘famille-rose’ vases and covers, Qianlong period recorded in 1783 at the family’s Hanover Square residence and estimated at £70,000-100,000 will be auctioned at a separate specialist sale in November. The highlight of the collection of British paintings to be offered is a superb work by Sir Joshua Reynolds P.R.A (1723-1792) from a large group of family portraits and pictures, Portrait of Hon. Francis Courtenay, Lady Honywood and her son, oil on canvas (est. £150,000-200,000) (above, photo Sotheby's). From the collection of important furniture from the state rooms and private apartments, the pair of George III mahogany hall chairs is estimated at £5,000-7,000. A suite of late 18th-century George III white painted and gilt seat furniture, attributed to James Wyatt, will also be offered. The pair of George III cream painted and parcel-gilt sofas, circa 1800 are estimated at £20,000-30,000, while three pairs of chairs are estimated at £7,000- 10,000 a pair. A further highlight of the selection of furniture is an important George II mahogany library table, circa 1750, possibly by Otho Channon (est. £120,000-180,000) and a fine George III mahogany octagonal rent table, circa 1800 with painted inset oil cloth panel (est. £20,000-30,000). Powderham Castle, Devon
Built between 1390 and 1420 by Sir Philip Courtenay and mentioned in the Domesday Book, Powderham Castle remains in the hands of his descendant, the Earl of Devon. While the family of the Earl of Devon is one of great antiquity, the works to be sold include some of the pieces which relate to the remodelling of the interiors by the celebrated late 18th/early 19th-century architect James Wyatt. The stunning interiors of Powderham are recognisable from the 1993 Academy Award-nominated film adaptation of Kazuo Ishiguro’s Remains of the Day, which featured Emma Thompson, Anthony Hopkins, Hugh Grant and Christopher Reeve as the retired American Congressman who buys the stately country manor. Many of the items in the collection to be offered from the private rooms of the historic home appeared in the memorable scenes of the film. The sale of these items will help to pay for the ongoing upkeep of Powderham Castle, which this year celebrates its 50th anniversary of welcoming visitors - Powderham Castle was chosen from over 200 applicants as a finalist in the 'Tourism Oscars', The South West Tourism Excellence awards. Lord Devon, 18th Earl of Devon, commented: "We are very proud of the fact that since 1959 in excess of a million people have visited Powderham and many events have been hosted in the castle and grounds. We now look forward to making the necessary provisions that will ensure the castle’s rich heritage and history of 600 years can continue to be enjoyed in the future."