"The Little Ice Age", The Rijksmuseum presents the first survey of winter landscapes by Hendrick Avercamp

"The Little Ice Age", The Rijksmuseum presents the first survey of winter landscapes by Hendrick Avercamp The Rijksmuseum presents the first exhibition devoted to Hendrick Avercamp, the foremost painter of Dutch winter landscapes in the 17th century. Avercamp was the first Dutch artist to specialise in paintings of winter landscapes featuring people enjoying the ice. Some 400 years on, our image of life in the harsh winters of the Golden Age is still dominated by Avercamp’s ice scenes with their splendid narrative details of couples skating, children pelting each other with snowballs and unwary individuals falling through the ice. In addition to twenty of his finest paintings, the exhibition features twenty-five of his best drawings from museums and private collections throughout the world. Hendrick Avercamp: The Little Ice Age runs from 20 November 2009 to 15 February 2010 at the Rijksmuseum. It will then appear at the National Gallery of Art in Washington from 21 March to 5 July 2010. The winter landscapes by Hendrick Avercamp (Amsterdam 1585-1634 Kampen) are some of the most characteristic Dutch panoramas of the 17th century. It was shortly after 1600 that he developed his vistas of frozen rivers and canals into an independent genre of Dutch art. His paintings and drawings convey a timeless atmosphere that continues to strike a familiar chord to this day. They demonstrate to perfection the passion that natural ice has aroused in the Dutch soul for centuries: when the water freezes over, everyone takes to the ice - young and old, rich and poor. The Mute, as Avercamp was known by contemporaries due to his inability to speak, had a sharp eye for a visual anecdote. There are always new details to be discovered in his theatrical settings: couples skating about elegantly, finely-dressed gentlemen playing kolf, children sledding, or a sailing-boat flitting past on skates. Avercamp also devoted space in his winter landscapes to the day-to-day hardships that the long, harsh winters of the period caused: a man laid out flat on the ice, another chopping wood to heat his house, a woman washing clothes in the freezing water and market traders trying to sell their wares. The tremendous diversity of figures in Avercamp’s paintings is a colourful illustration of 17th-century fashions among countryfolk and fishermen all the way up to the highest aristocrats. Drawings. Avercamp’s drawings form a particularly varied and adventurous part of his oeuvre. Apart from ice scenes they also include summer landscapes, people at work and remarkable costume studies. Often the individuals and groups in his drawings reoccur in his paintings, invariably set in a new context. The twenty paintings and twenty-five drawings featured in Hendrick Avercamp: The Little Ice Age have been gathered from museums and private collections in Europe and the United States, including the National Gallery in London, Szépmüvészeti Múzeum in Budapest and Houston Museum of Fine Arts in Houston (Texas). From 21 March to 5 July 2010 the exhibition will appear in the National Gallery of Art in Washington. 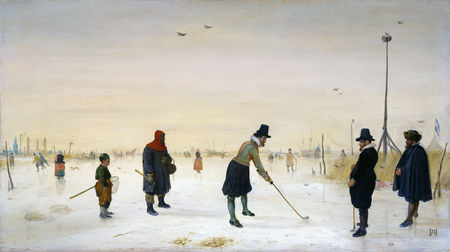