A collection of monochrome porcelains, Yongzheng, Qianlong and Tongzhi marks

A collection of monochrome porcelains, Yongzheng, Qianlong and Tongzhi marks A rare pair of copper-red-glazed jardinieres and stands. Yongzheng four-character seal marks in underglaze blue and of the period (1723-1735)

The jardiniéres well potted with deep sides, the exterior and everted rim covered with a glaze of rich bean-red color stopping at the raised outer edge of the rim, the white glaze of the interior with faint blue-green tint, with a drainage hole in the bottom; the shallow stands also with everted rim above a band of chrysanthemum petals molded on the sides, covered with a similar glaze that thins to a paler tone on the petal ribs, the interior also in white in contrast to the rich red glaze. 5½ and 5 3/8 in. (14 and 13.6 cm.) diam. (2) Est. $40,000 - $60,000

Provenance: Acquired by the grandfather of the present owners, Whampoa, Guangdong, circa 1890-1920s, thence by descent within the family.

Of the extant jardinières of this type and size that have been published, all, like the present pair, have four-character Yongzheng marks, and all are monochromes. This appears to follow the trend of the use of monochrome glazes during the reign of the Yongzheng emperor, when there was a concerted effort to produce new and interesting glazes, following a resurgence of interest in monochrome-glazed porcelains in the Kangxi period.

A jardinière with a Jun-type glaze in the collection of the Victoria and Albert Museum is illustrated by R. Kerr, Chinese Ceramics: Porcelain of the Qing Dynasty 1644-1911, London, 1986. A pale blue-glazed example was sold in these rooms, 19 March 2008, lot 655, and a copper-red-glazed example is illustrated by J. Ayers, Chinese Ceramics in the Baur Collection, vol. 2, Geneva, 1999, no. 257. The Baur jardinière is very unusual as the sides are vertically fluted, rather than plain like all of the other examples. Just as the stands for the present jardinières are very rare in that the sides are molded with a band of chrysanthemum petals, similar to the band seen at the bottom of peachbloom-glazed 'chrysanthemum' vases of Kangxi date, such as lot 442 in this sale.

A pair of pale blue-glazed saucer dishes. Yongzheng six-character marks in underglaze blue within double circles and of the period (1723-1735)

Notes: A similarly sized Yongzheng dish with lavender-blue glaze and identical mark is illustrated in the exhibition catalogue, Shimmering Colours: Monochromes of the Yuan to Qing periods in the Zhuyuentang Collection, Art Museum, The Chinese University of Hong Kong, 2005, p. 141, no. 73. Compare, also, a pair of Yongzheng dishes of slightly smaller size covered with what is described as a pale cobalt-blue glaze in the Percival David Foundation, included in the Illustrated Catalogue of Ming and Ch'ing Monochromes, London, 1973, section 6, nos. B 560 and 561. A similar pair was sold in these rooms, 24 March 2004, lot 244, and another pair of clair-de-lune dishes was sold in our London rooms, Chinese Monochrome Porcelains from the Collection of the late Professor E.T. Hall, C.B.E., 7 June 2004, lot 273. Other examples include a pair formerly from the Edward T. Chow Collection, sold at Sotheby's, Hong Kong, 25 November 1980, lot 74, and a pair of smaller size (11.2 cm.) from the T.Y. Chao Collection, sold at Sotheby's, Hong Kong, 18 November 1986, lot 105. A blue-glazed cong-form vase. Tongzhi six-character mark in underglaze blue and of the period (1862-1874)

Of square section, the rectangular body raised on a broad circular foot and decorated on two sides with molded elephant-head and ring handles, covered overall, including the base, with a glaze of rich blue color thinning to a paler tone on the raised areas of decoration
11 5/8 in. (29.5 cm.) high, wood stand, Japanese wood box  Est. $10,000 - $15,000 A rare small coral-ground cup. Yongzheng six-character mark in underglaze blue within a double circle and of the period (1723-1735) Provenance: Acquired circa 1960s-1974, and thence by descent within the family. A brown-glazed shallow bowl. Qianlong seal mark in underglaze blue and of the period (1736-1795) 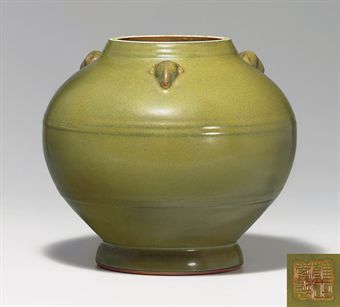 A teadust-glazed globular vase. Yongzheng four-character inscribed seal mark and of the period (1723-1735)

The lower body of a hu-form vessel derived from a Han bronze form, raised on a rounded foot and encircled by two double bow-string bands, repeated on the short neck above three ram's heads applied to the shoulder, covered inside and out with a thick glaze of finely speckled yellowish teadust color thinning to pale russet on the masks and on the seal mark on the similarly glazed base. 8¾ in. (22.2 cm.) high - Est. $8,000 - $10,000

Notes: Yongzheng-marked vases of this form, complete with a waisted neck, are extremely rare. A Yongzheng-marked blue and white vase of this form molded with similar ram's heads on the shoulders was sold at Sotheby's, Hong Kong, 11 April 2008, lot 3067, and a flambé-glazed vase of related form with a similar incised four-character Yongzheng mark, but lacking the molded ram's heads, was sold in our Hong Kong rooms, 30 May 2006, lot 1352. 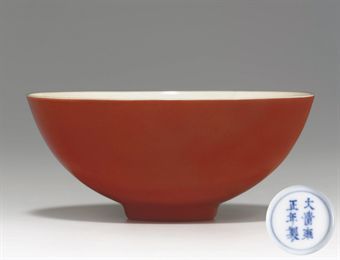 A rare small coral-ground bowl. Yongzheng six-character mark in underglaze blue within a circle and of the period (1723-1735

A pair of copper-red-glazed lianzi bowls. Qianlong seal marks in underglaze blue and of the period (1736-1795)

Provenance: Acquired circa 1960s-1974, and thence by descent within the family. 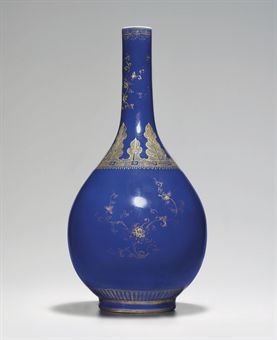 A copper red-glazed dish. Yongzheng six-character mark in underglaze blue within a double circle and of the period (1723-1735)