"Noble Tombs at Mawangdui: Art and Life in the Changsha Kingdom" @ the Santa Barbara Museum of Art

"Noble Tombs at Mawangdui: Art and Life in the Changsha Kingdom" @ the Santa Barbara Museum of Art More than 2,000 years ago, a Chinese marquis and his family began their plans for the afterlife with three lavish tombs in Hunan Province which were excavated in the 1970s.  For the first time in the U.S., their extraordinary existence will come to life in this exhibition. Nearly 70 treasures including lacquer ware, wood carvings, jade ornaments, bronze sculptures, seals, and silk costumes and textiles from the Hunan Provincial Museum will be on view at the Santa Barbara Museum of Art after an exhibition at the China Institute in New York City earlier this year. On view 10 September through 13 December, 2009 at the Santa Barbara Museum of Art.

The excavation at Mawangdui in southeastern China is considered one of the major archaeological discoveries of the 20th century.  Containing the remains and possessions of the Marquis of Dai and his wife and son, the tombs were found between 1972 and 1974 in the archaeological site of Mawangdui, which is located in a suburb of the modern city of Changsha, Hunan Province.  More than 3,000 objects from the Western Han dynasty (206 BCE to 25 CE) were found in extraordinary condition representing the highest levels of workmanship.  The tomb that housed the wares most represented in the exhibition, also held the remarkably well-preserved body of the noblewoman of the family, known affectionately as “Lady Dai”.  “People during the Han dynasty regarded death as birth and longed for immortality,” notes Willow Hai Chang, Director, China Institute Gallery.  “To prepare for the afterlife, they constructed their tombs to be eternal residences. As a result of this landmark excavation, we now have a rare window into the fascinating Han civilization through these remarkable objects of the highest artistry.”

The extraordinary significance of this assemblage is not only apparent in the variety and quality of objects, but also the time period and place from whence these artifacts originated.  The Changsha Kingdom was heir to the Chu culture in southeastern China.  It played a significant role in the cultural formation of the Han dynasty (202 BCE–220 CE), a defining period in Chinese history that shaped the artistic, intellectual, political, religious, and social foundations of Chinese civilization.  The objects preserved in the Mawangdui tombs give a visual dimension to early Han dynasty beliefs, design, and technology, while the body of material culture challenges us to re-evaluate our current understanding of early China.

Works in the exhibition showcase those items that were felt to have great meaning to the owner, thereby deeming them necessary in life after death.  Many of the objects preserved delicate or perishable materials, such as food, drink, and cosmetics, mostly fashioned with wood, silk, and paper.  Some specific highlights include a two-tiered cosmetic box containing nine small boxes, thought to have belonged to Lady Dai.  The outer surface of the box is coated with black lacquer and then affixed with patterned gold foil, and the interior coated with vermilion lacquer.  The nine small boxes in the lower tier contained items that could have been found on many women’s dressing tables at the time: cosmetics, rouge, silk powder pads, combs and a needle case.

Of course, what would a journey be to the afterlife without the joy of music!  Five charming wooden figurines of musicians which seem to form a small family band are included in the exhibition, indicating the importance of song and dance to the tomb occupant.  The figures are painted in black and vermilion to depict their faces and colorful gowns.

The tombs at Mawangdui also contained a stunning amount of information in the form of books and tablets on health, well-being, and longevity.  These findings are particularly intriguing as they represent some of the earliest examples of a cohesive writing style including the Chinese characters that are utilized today.  One inscribed tablet refers to dried soybean seeds that have germinated and were used in the treatment of headache, paralysis, asthma and other health problems.  Another book, entitled Prescriptions for Maintaining Health, was written on silk and contains 32 different medical prescriptions.

The exhibition also features one remarkably preserved silk robe and textile fragments two of which are the world’s earliest known examples of printed and painted design on gauze weave.  From these superb examples, silk was widely used among nobilities in early Han dynasty.  The technology of silk production and textile making reached an unprecedented height that is rarely surpassed today.  “ Hunan embroidery” remains one of the four celebrated styles of embroidery in China.

Noble Tombs at Mawangdui: Art and Life in the Changsha Kingdom, Third Century BCE to First Century CE is organized by the China Institute Gallery in collaboration with the Hunan Provincial Museum, and is curated by Chen Jianming, Director of the Hunan Provincial Museum, who also edited the catalogue.  A fully illustrated, bilingual catalogue accompanies the exhibition. 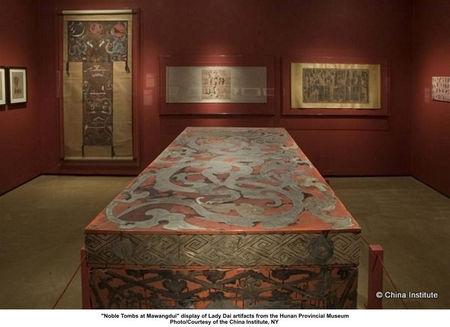 Commentaires sur "Noble Tombs at Mawangdui: Art and Life in the Changsha Kingdom" @ the Santa Barbara Museum of Art