the sturdily potted ovoid body brilliantly painted in deep cobalt blue, with two striding five-clawed dragons bearing fierce expressions, one attempting to reach for a stylized shou character, immersed in an atmosphere of ruyi-head clouds and flames, above a bed of alternating waves and cliffs at the foot, with a border of ruyi-head foliate scrolls below the petite neck, culminating in a lipped rim.

Note: The present jar is impressive for its magnificent size and lively depiction of a pair of ferocious dragons. Drawing on a Jiajing design that incorporated the five-clawed dragon, clouds, waves and rocks motifs found on imperial robes, the addition of the lingzhi fungus scroll on the shoulder serves to complement the shou character on the body of the jar. A heightened sense of vivacity of the design has been made possible by the considerable amount of space made available by its large size. Such sizeable jars were extremely difficult to fire and are testament to the technical virtuosity of the Jingdezhen potters of the late Ming period. 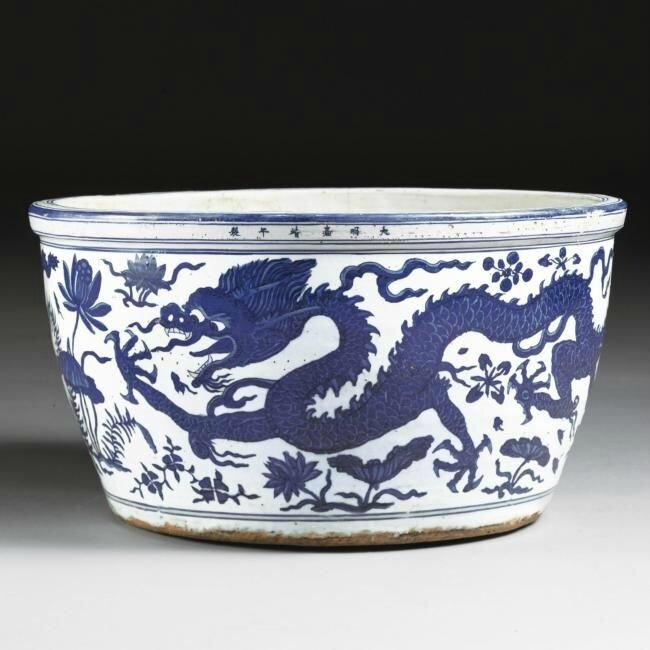 Note: This basin is unusual for its animated design of dragons amongst water plants and no other example appears to have been published. Compare a slightly larger basin of this form, but decorated with dragons pursuing flaming pearls amidst clouds, included in the exhibition Selected Ceramics from the Collection of Mr. & Mrs. Hu, Shanghai Museum, Shanghai, 1989, cat. no. 21; one sold at Christie's New York, 19th September 2006, lot 252; and another, painted with dragons among scrolling lotus, from the Palmer Museum of Art, The Pennsylvania State University, Philadelphia, sold in these rooms, 23rd March 2004, lot 640. Basins of this type, painted with winged dragons pursuing flaming pearls above waves and rocks are also known; see one in the Art Gallery of New South Wales, included in the exhibition Chinese Ceramics, Art Gallery of New South Wales, Sydney, 1965, cat. no. 29; and another sold in our London rooms, 31st May 1989, lot 82.

For a small Jiajing jar, with reign mark and of the period, similarly decorated with dragons and water plants between a ruyi collar encircling the shoulder and a band of petal lappets around the base, see one sold in our London rooms, 13th June 1989, lot 218. of quatrelobed section with swelling shoulders and a petite upright neck, painted in deep cobalt blue with four Daoist Immortals Li Tieguai, Liu Hai, Hanshan and Shide, among pine trees and rockwork, below a scrolling cloud border at the shoulder and ruyi-clouds on the neck, two Japanese boxes (3).

NOTE: For a small Jiajing jar of ovoid form also decorated with the Four Immortals, but portrayed in a different stylistic manner and with shou characters, compare one in the Palace Museum, Beijing, illustrated in The Complete Collection of Treasures of the Palace Museum. Blue and White Porcelain with Underglazed Red (I), Shanghai, 2000, pl. 99.

A closely related jar of this unusual design, depicting the Four Immortals Honoring the God of Longevity, from the Riesco collection, was included in the Oriental Ceramic Society exhibition Chinese Blue and White Porcelain, Arts Council Gallery, London, 1954, cat. no. 163; another example was sold in our Hong Kong rooms, 28th November 1979, lot 97. heavily potted, painted in underglaze-blue with three four-clawed dragons chasing flaming pearls amongst clouds above waves breaking onto rocks, the neck with a border of lappets and overlapping leaves. the archaistic vessel painted to the exterior in a soft underglaze-blue, with consecutive tiers of scrolling bands, flowerheads, stylized clouds, a broad section of flowers growing amongst rockwork, below a small band of pendent lappets, culminating in a trumpet neck repeating the flowers and rockwork motif, set with two columns of shallow molded flanges on the neck and body, the waisted foot with two bosses of shallow curved sides, painted in a light cobalt-blue wash to the side of interior with seven of the bajixiang ('Eight Buddhist Emblems'), the eighth emblem featured on the convex well above a scrolling lotus, enclosed in a double circle and bordered by radiating lappets, the exterior painted with small alternating lingzhi sprigs and wasps, supported on a petite foot, the six-character reign mark on the slightly recessed base of baluster form, boldly painted around the exterior with a continuous band of scrolling lotus flowers between a band of lappets at the base and wisps of clouds at the short waisted neck