New York - Christie's is delighted to announce further details of its upcoming flagship auction on October 21, 2009. The day will feature two distinct sales, beginning with Jewels: The New York Sale & The Annenberg Diamond. Led by the perfect D color Flawless Annenberg Diamond of 32.01 carats, the auction will also include rare gemstones and signed pieces by designers such as Boucheron, BVLGARI, Cartier, Van Cleef & Arpels, David Webb, and Harry Winston, among others. For collectors of period jewels, the day’s second auction, Rare Jewels and Objets d'Art: A Superb Collection, will feature an array of over 200 vintage jewels and special creations from Black, Starr & Frost, Boucheron, Cartier, Fabergé, Rubel Frères, René Lalique, Van Cleef & Arpels, Verger Frères, and Harry Winston, to name but a few. Over 380 items will be offered during the course of the two sales, which are expected to realize a combined total in excess of $25 million.

Rahul Kadakia, Head of Jewelry for Christie’s New York, comments, “We are honored to present such a remarkable breadth of fine gems and superb jewels at Christie’s first major sale of the Fall Season. From period jewels to contemporary designs of the highest caliber, these sales are truly unique in the sheer umber of exceedingly rare items offered. When jewels of this quality and exceptional provenance come to auction alongside masterpieces of Art Nouveau and Art Deco design, it is a major event in the global collecting community that is not to be missed.”

At the second auction of the day, Christie’s is honored to present a singular collection of over 200 period jewels. Among the extraordinary and exotic pieces included in Rare Jewels & Objets d'Art: A Superb ollection are gemstones of exceptional provenance and a number of museum-quality jewels that have been featured in major jewelry exhibitions around the world.

A leading example of the many important works of art to be found in this collection is the Art Deco “Mystery” Clock by Cartier from circa 1928, one of only 12 such clocks created during the storied collaboration between Cartier and legendary clockmaker Maurice Coüet in the years 1922-1931. The “mystery” of the Mystery Clock is found within the dial where the hands appear to float across the face with no apparent anchor. In reality, they are held in place by transparent disks and driven by gears that are ingeniously hidden in the frame of the case. The example to be offered is made of topaz, jade, coral, and enamel with rose-cut diamond hands designed as a dragon (estimate: $500,000-700,000). Perhaps one of the most charming objects in the collection is “La Maison d’Hortense,” an entirely unique gold and multi-gem birdcage created by Verger Frères for Van Cleef & Arpels circa 1935 (estimate: $100,000-150,000). The cage was originally commissioned by an Indian Maharajah as an aquarium for his pet tree frog and featured a tiny gold ladder, which the frog would ascend and descend according to the weather. Later, the aquarium was transformed into a birdcage, and the ladder was replaced with a swing to house two permanent “pets”: a pair of carved emerald lovebirds. Leading the sale’s offering of historic gems is The Taj Mahal Emerald, one of the most treasured jewels in Indian history (estimate: $800,000-1,200,000). This intricately carved stone circa 1630-1650 is one of a small group of exquisite emeralds commissioned by the Mughal Court, possibly during the reign of Emperor Shah Jahan. Emeralds were enormously popular with the Court, whose emperors referred to them as “Tears of the Moon” because of their opaque transparency. The name of the emerald is derived from its intricately carved surface of lotus, poppy flowers, and other foliage that mirrors the decoration of the Taj Mahal. At the Paris Exhibition of 1925, the stone was one of three large Mughal emeralds that featured prominently in Cartier’s Collier Bérénice, a spectacular shoulder ornament that also boasted pearls, diamonds, and black enamel. 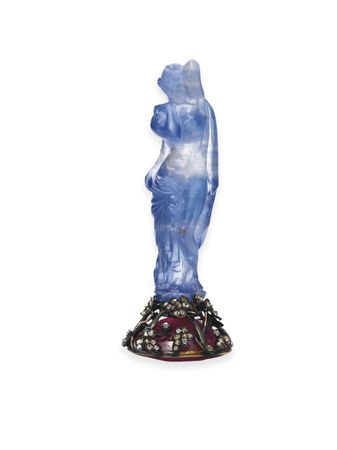 The sapphire sculpture known as the “Blue Venus” (estimate: $300,000-500,000) bears a provenance as fascinating as the story of the Russian Royal family that owned it. Created in the mid-19th century, the four-inch-tall figure of the goddess Venus was part of a vast fortune in jewels amassed by the Youssoupov family.

Princess Zenaide Youssoupov’s personal collection of jewels was considered second only to those in the imperial vaults, and included the Polar Star diamond, the La Regente Pearl, and the extraordinary La Pelegrina Pearl, among other treasures. No official documentation exists to confirm how the Blue Venus came into the family; however, one version of the figurine’s history suggests that Catherine the Great gave the piece to Prince Nikolai Youssoupov, her alleged lover.

The Art Nouveau period from the early 1890s until about 1910 introduced a brief but remarkably fashionable style that captured the moral and artistic freedom of the time and produced some of the most evocative jeweled art in the history of jewelry design. The Rare Jewels & Objets d’Art collection features a number of legendary items crafted by the leading designers of the period.

The Breton woman or “Bigoudine” was a favorite subject for writers and artists alike during the second half of the 20th century. Their characteristic white bonnets or coiffes were especially popular with certain jewelers of the Art Nouveau movement, Henri Vever included. His “La Bretonne” pendant is perhaps the most iconic of the Art Nouveau designs created at the turn of the century; it was exhibited at the 1900 Exposition Universelle in Paris and earned Vever the Grand Prix award for design. Crafted in enamel and highlighted with opals, diamonds, and amethysts, the pendant bears the delicate profile of a young girl wearing the traditional Breton headdress, set against the background of a flowering bloom (estimate: $400,000-600,000).

The house of Boucheron is represented in the collection by the superb “Juno” pendant, crafted in enamel, diamond and sapphire (estimate: $200,000-300,000). Drawing upon mythology as inspiration, Juno, the queen of the gods, is portrayed in white jadeite with gold hair and a purple, blue and green enamel headdress, and flanked by peacocks, another favorite Art Nouveau motif. A SUITE OF “THISTLE” JEWELRY

Master jeweler René Lalique made jewelry for Boucheron, Cartier, and Vever before striking out on his own in the 1890s to embrace a more individualistic style. A highlight from this period of exuberant creativity is his suite of “Thistle Jewels”, an extraordinary bracelet and necklace crafted from diamonds and star sapphires that showcases Lalique’s masterful use of enamel in design (estimate: $400,000-600,000).

Never before has a particular period in art history drawn such a wide variety of influences as the Art Deco period. Stylistically, it completely broke with the movements that had preceded it and is considered the decorative arts parallel to modernist thought. Art Deco designers embraced a minimal symmetrical style in which decorative motifs consisted of geometric or stylized ornamentation and introduced bold color and geometric patterns.

The Rare Jewels & Objets d’Art collection features some of the most exciting jewels of the Art Deco period, including the sensational diamond and multi-gem “Wave” bracelet by Rubel Frères. Created circa 1925, the undulating upper panel of the bracelet is set with five pierced flowers formed of pear-shaped diamonds and black onyx and emerald accents, while the more fanciful lower panel depicts a pleasing floral scene formed from emeralds, rubies and sapphires (estimate: $500,000 - $700,000). Among the contemporary designs in the collection is an array of superlative objects by the esteemed artist Daniel Brush. Often described as innovative, enigmatic and extraordinary, Brush's creations beckon admirers and yet defy easy explanation. Drawing from a breadth of worldly experience, introspective study, and unparalleled technical virtuosity, his idiosyncratic oeuvre is often called the best-kept secret in the art world and is sought after for public, private and Royal collections.
Among the Brush creations included in the sale is a charming pink bakelite and colored diamond “Bunny
Bangle” (picture above, right; estimate: $40,000 - 60,000), and the elegant gold and steel  mosaic “Placidia” box (estimate: $20,000 - 30,000).

A selection of highlights from Jewels: The New York Sale & The Annenberg Diamond and Rare Jewels & Objets d’Art: A Superb Collection will be previewed at Christie’s locations in London, Hong Kong, and Los Angeles prior to the sale in New York.