Seven rare Chinese paintings will be offered by Eskenazi, one of the world’s leading dealers in Chinese works of art, at 10 Clifford Street, London W1, from Thursday 29 October to Friday 27 November 2009 to coincide with the 12th staging of Asian Art in London, 29 October to 7 November. The unparalleled expertise on Asian art to be found in London is demonstrated during this annual event when top dealers, auction houses, museums and institutions present exhibitions, auctions, lectures and gallery talks that attract visitors from around the world.

Giuseppe Eskenazi has always had a personal interest in this rarified aspect of Chinese art and acquired the seven paintings over a period of 25 years. This is the first time they have been shown in public by the gallery, which is more associated with other aspects of Chinese art such as bronzes, sculpture and imperial porcelain. The paintings range in date from the 12th to the 15th centuries, and all but one, which is on paper, are painted on silk. The quality of the silk is indicated by the tightness of the weave and reflects the status of the artist and his patron. Such delicate works of art are rare survivals and do not often appear on the market. The finest collection in the world is in the National Palace Museum in Taiwan. The Chinese particularly prized painting and calligraphy for its intellectual, documentary and poetic content. All but one of the present paintings bear seals of artists or collectors. Of the seven works, five are album leaves, one is a fan painting, and one is a handscroll. Unlike most Western paintings, they would not have been on permanent display but examined and admired in private, perhaps with a particular friend or on some auspicious occasion.

Particularly outstanding is an album leaf depicting a Falconer and Horse, painted in ink and colours and dating from the Southern Song period, late 12th-early 13th century. The saddled animal is caparisoned with a magnificent tiger skin, the falconer wearing a belted green robe and tight-fitting cap with a peregrine falcon perched on his right arm. It is signed by the painter Chen Juzhong and probably depicts an attendant of the emperor for whom hunting was a key activity. It is stamped with six seals, including one of Zhu Gang, Prince of Jin (1358-1398), the elder brother of Zhu Di who reigned as Yongle emperor between 1403 and 1424. 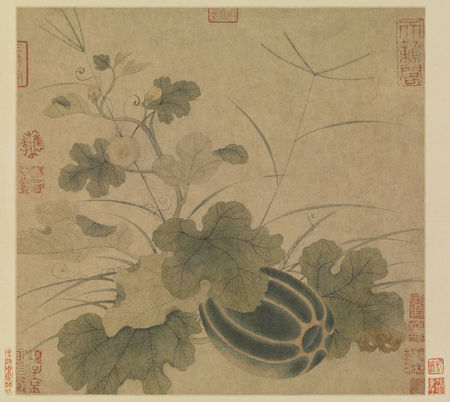 Another superb work is the silk handscroll which depicts the pavilion or palace of the Tang (7th century) imperial Prince Teng, renowned throughout China for its architectural beauty, as evoked in Wang Bo’s popular poem ‘Preface to the Pavilion of Prince Teng’, written at the top left corner of the painting. The minutely drawn buildings appear to float in the clouds above a river, a mountainous landscape receding into the distance. Although the site is known, the palace no longer survives. The painting is attributed to Wang Zhenpeng (c.1280-c.1329), Yuan period, or a close contemporary; it is signed and dated 1312. Wang Zhenpeng was the foremost Yuan practitioner of a painting style known as Jie hua (boundary painting).

Of great charm is the album leaf depicting a melon plant, with one large fruit lying on the ground partly hidden by leaves, its flowering, sinuous stem and scrolling tendrils mingling with spiky, feathery grasses. Painted by an anonymous artist of the Yuan or early Ming period, 14th or 15th century, in ink and colours on paper, it has obviously been much admired over the years as it is stamped with ten collectors’ seals including two of the Qianlong emperor as well as two 20th century seals of Zhang Xueliang, a charismatic Manchurian warlord and one-time ally of Chiang Kai-shek. A circular painting shows an elderly gentleman holding a staff and resting in a landscape by a riverbank under tall, gnarled pine trees. It dates from the Yuan or very early Ming period, 14th century; the artist, collector and connoisseur Wang Jiqian (Wang Chi-Ch’ien, C.C. Wang) believed it to be attributable to ‘the hand of Sheng Mao’ (1295-1368) (fig E). It is indeed similar to a fan-shaped leaf attributed to that artist in the National Palace Museum. A fan painting is mounted as a hanging scroll and shows a group of ducks swimming on a pond amongst lotus plants and reeds. By an anonymous artist, it dates from the Southern Song or early Yuan period, 13th century. A silk album leaf also painted in ink and colours depicts a landscape of distant mountains, hills, trees and grasses with a flock of birds in flight and waterfowl standing on the bank of a river or lake. Again by an anonymous artist, it dates from the Southern Song period, early 13th century. It is stamped with two collectors’ seals, one of which is of Shaoxun who died in 1233 and was for many years chief minister at the Southern Song court. Finally, an anonymous silk album leaf depicts girls gathering foxnuts and dates from the Southern Song or Yuan period, 13th century. Two girls are leaning out of opposite sides of a boat under a willow tree harvesting the seeds of the foxnut or gorgon plant, euryale ferox, a member of the water lily family. Foxnut seeds are believed in Chinese medicine to restore youthful vigour and combat impotence. Eskenazi’s superb exhibition offers visitors an opportunity to admire seven beautiful, fragile and rare works of art which have never before been exhibited in London. It will be accompanied by a fully-illustrated catalogue with an extremely informative introduction by Roderick Whitfield, Percival David Emeritus Professor of Chinese & East Asian Art, School of Oriental & African Studies, London, a leading authority on the subject.