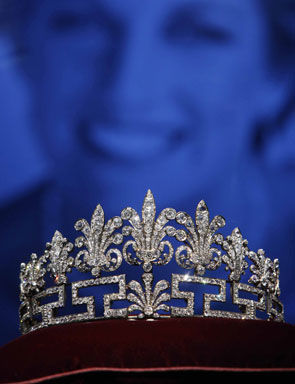 A tiara worn by Britain's late Princess Diana, is displayed during a press preview of the exhibition. (AP Photo/Matt Rourke)

PHILADELPHIA, PA.- Since the beginning of American history, our nation has had a complicated relationship with British royalty, and an unending fascination with the government we overthrew in 1776. Known to many as “The People’s Princess,” Princess Diana won the hearts of millions, on both sides of the Atlantic and around the world. From October 2 through December 31, 2009, the National Constitution Center will host the international traveling exhibition, Diana: A Celebration, providing an opportunity for visitors to learn more about the life and work of the Princess of Wales.

Making its East Coast debut, and returning to the United States for the first time since 2007, the award-winning exhibition explores Diana's childhood, her engagement to HRH Prince Charles, their royal wedding, their children, and Diana's life and work as a global humanitarian and model citizen. Diana: A Celebration is on loan from the Althorp Estate, the Spencer Family’s 500-year-old ancestral home in England.

“This exhibition is a remarkable tribute to Princess Diana’s life and work,” said National Constitution Center President and CEO Linda E. Johnson. “Because she was admired by millions across the globe, we expect Diana: A Celebration to have broad appeal, which will allow the Center to expand its audience and, in turn, introduce more visitors to the remarkable stories of ‘We the People’ celebrated here every day.”

· 28 dresses, suits, and gowns designed by Versace, Valentino, Chanel, and Azagury, among others, worn by Diana during her public life.

· Musical score and handwritten lyrics of the Elton John/Bernie Taupin composition dedicated to Diana and adapted from “Candle in the Wind”.

· The original, hand-edited text of Charles Spencer’s moving tribute to his sister, delivered at Diana’s funeral in Westminster Abbey.

The myriad of charities and causes Diana championed, including her pioneering efforts with HIV and AIDS patients, the homeless, and the campaign to ban landmines, are also featured in the exhibition. A three-screen video presentation highlights the hundreds of associations that continue to benefit from her patronage and energetic dedication. The world’s grief at her untimely death is dealt with sensitively, in a display of books of condolence and space for reflection and remembrance.

To augment the exhibition, the Center’s public programming staff in the Annenberg Center for Education and Outreach is developing a variety of family activities about the American presidency vs. the monarchy, the role of women in global societies, and Diana’s civic accomplishments, among other topics.

Also in keeping with the Center’s mission to foster discussion and citizen engagement, a series of special programs is planned, exploring the nature of aristocracy and America’s fascination with royalty. On October 13, Daily Beast founder and editor Tina Brown will discuss Princess Diana and her dramatic impact on the rise of celebrity culture with moderator Todd S. Purdum of Vanity Fair.