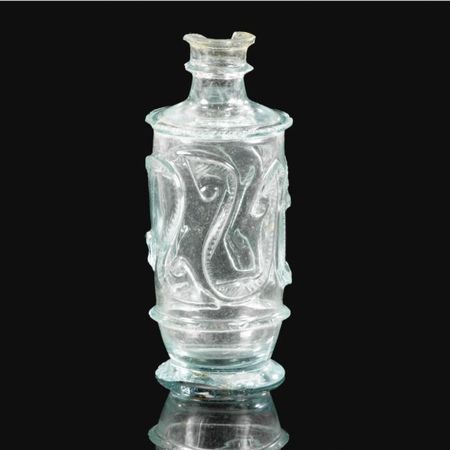 NOTE: This bottle was produced during the Fatimid period for use as a container for perfume and scented oils. A rock-crystal bottle of similar decoration is found in the Keir Collection, both bottles share the same bevelled palmette scroll around the body (Pinder Wilson, R., in Robinson, B. (ed.), Islamic Art in the Keir Collection, London, 1988, no. R3, pp. 294-295). Rock crystal and cut-relief glass were produced alongside one another from the ninth century onwards. There existed a common repertoire of shapes and designs between cut-glass and rock crystal and it was likely that they were carved in the same workshops by the same craftsmen (Contadini, A., Fatimid Art at the Victoria & Albert Museum, 1998, p.25). A cut-glass bottle of similar form is in the al-Sabah collection illustrated in Carboni 2001, p.129, cat. 2.30f. made of clear glass, the faceted and slightly flared neck leading to a square body with gently sloping shoulders, with flat base. 6cm. height. Est. 3,000—5,000 GBP - Sold 3,750 GBP