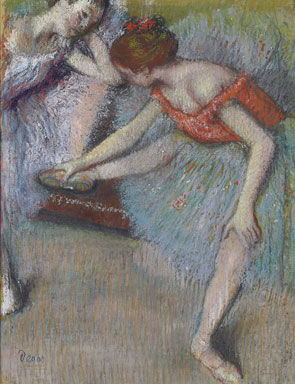 NEW YORK, NY.- Rare and important works by Pablo Picasso, Edgar Degas, Claude Monet, Camille Pissarro, Auguste Rodin, Henri Matisse, and Piet Mondrian are among the highlights of Christie’s upcoming Evening Sale of Impressionist and Modern Art on November 3. Forty exceptional works will be offered, including paintings, drawings, and sculpture. The sale is expected to achieve in excess of $68 million.

Tête de Femme by Pablo Picasso
Among the most anticipated works to be offered this season is Picasso's vibrant Tête de Femme from 1943, a wartime portrait of the artist's muse and mistress Dora Maar. Painted in October 1943 during a period of continued hardship and deprivation in Paris, the portrait is remarkable for its bright, saturated colors and celebratory air -- an effect quite different from the mostly somber-hued portraits by Picasso from the same period. Dora Maar is discernible in the simplified and disjointed face in the painting by her large staring eyes, trademark raven hair (represented here as an elongated dark blue oval), and her customary hat, dressed in this depiction with three flower-like pins and a trailing ribbon.

Le Pont de chemin de fer, Pontoise by Camille Pissarro
Of the many notable paintings that Pissarro made in and around Pontoise in the years 1872 and 1873, Le Pont de chemin de fer, Pontoise, remains a stand-out. Paintings of this period have been called the most purely Impressionist of Pissarro's entire oeuvre, and here the artist used mixtures of pure color to achieve a carefully composed landscape with luxurious qualities of light. Pissarro's chosen view takes in the river Oise, as seen from just below the town of Pontoise, with the railway bridge visible in the near foreground. Rather than painting the modern railway as an imposition upon the quaint and verdant landscape, Pissarro has subtly integrated the iron bridge and its traffic into the surroundings, so that it becomes a landscape feature seen fully within the context of the enduring natural world.

Danseuses by Edgar Degas
The sale’s cover lot is Danseuses, 1896, a richly-textured pastel drawing from Degas’ highly-coveted series of drawings on this theme (pictured on page one, left). Degas returned to depictions of ballet dancers during the later years of his career, never tiring of the different poses and interactions created by the female figures. Here, he employs a close-up and tightly cropped view of two dancers at rest, one stretching while the other leans heavily against a wall. The drawing is remarkable for the expressive vigor in the artist’s lines and the sheer brilliance of his densely-layered colors. By this point in his career, Degas has largely dispensed with his early penchant for specificity and detail in favor of the looser, more expressive style employed here.

Vétheuil, effet de soleil by Claude Monet
Rounding out the exceptional offerings of Impressionist works in the sale is Monet's Vétheuil, effet de soleil. This sun-drenched view of the picturesque village of Vétheuil was painted in 1901, when Monet was refining the distinctive serial approach that would yield some of his most celebrated late career works, including the water garden paintings at Giverny. All fifteen of the Vétheuil paintings, including the present work, take in the same view from across the Seine, varying only in lighting effects and weather conditions. Vétheuil, effet de soleil was one of a number of works from the series that was purchased by Galerie Durand-Ruel in 1902, where it remained until its sale to a private collector in 1949. Seven of the 15 views in the Vétheuil series are now housed in major museum collections around the world, including the Musée D'Orsay and the Pushkin Museum.

Modern Highlights
Two magnificent Modern works not seen in public for over four decades are offered from the estate of Jack J. Dreyfus, Jr., founder of the highly successful brokerage firm Dreyfus & Co. Rosace by Henri Matisse is a paper cut-out in the form of a symmetrical, stylized rose that served as the marquette for a stained glass window commissioned in memory of Abby Aldrich Rockefeller for the Union Church in Pocantico Hills, NY. The massive, seven-foot wide design is a perfect illustration of the innovative paper cut-out process that was Matisse’s creative passion during his last years. Sadly, Rosace would become Matisse's own swan song. On the day he wrote a letter confirming the completion of the marquette, Mattisse suffered a stroke and died just two days later. After his death, the gouache, pencil and paper collage was laid down on canvas to be preserved for prosperity.

Also from the Dreyfus Estate is Wassily Kandinsky's Winkelschwung (“Angular Swing”) from 1929 (estimate: $1.5-2.5 million), a vibrant work that bears the influence of the artist's teaching residency at the legendary Bauhaus. Populated with geometric shapes, lines, and points arrayed along an obtuse angle, the painting may be read as a landscape of buildings and tree forms, or as an interpretation of the Bauhaus campus itself.

Sculpture Highlights
Few 19th century sculptures are more instantly recognizable than Rodin's Le Baiser (The Kiss), a romantic depiction of an embracing couple inspired by a tale of forbidden love from Dante's Inferno. Christie's is pleased to offer an extremely rare bronze cast of the sculpture, one of only five created during the artist's lifetime from the plaster model of the sculpture known as the Milwaukee version. In these versions only, the male figure's right hand is lifted slightly from the thigh of his lover so that it appears to hover tentatively, a poignant gesture that Rodin called "more respectful". Owned by Geraldine Rockefeller Dodge until 1975, this elegant, 34-inch tall bronze has been in a private collection in New York for nearly 35 years.

Rounding out the sculptural highlights in the sale are Alberto Giacometti's Femme Debout, (estimate: $1.4-1.8 million) from a series of thin, elongated standing female figures the artist conceived in 1960- 61; Edgar Degas' Grand Arabesque (estimate: $500,000-700,000), an elegant bronze of a young female dancer in mid pose, extending her body from fingertips to toes; and Rodin's Néréides (estimate: $200,000-300,000), a depiction in bronze of three intertwined sea nymphs.