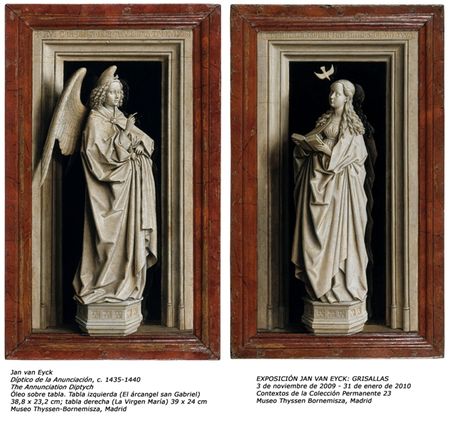 On 3 November the Museo Thyssen-Bornemisza in Madrid opens the 23rd exhibition in its Contexts of the Permanent Collection series. The exhibition is devoted to Jan van Eyck’s Annunciation, one of the jewels of the Permanent Collection and one of the most important examples of grisaille painting. Widespread and highly esteemed from the late 14th century onwards, the technique known as grisaille is based on the graduated application of a single colour, usually grey or another neutral tone, which is used to model the shadows and thus produce an effect of sculptural relief.

In addition to Van Eyck’s painting, the exhibition includes other examples of grisaille painting from the late Middle Ages in the form of drawings, paintings, ivories, miniatures and textiles. It aims to offer a comprehensive overview of this technique in the 14th and 15th centuries and to present an in-depth study of its artistic, social and functional implications. This will be the case both through the carefully selected group of works on display and also – as is always the case with the Museum’s exhibitions of this type – through the essays in the accompanying catalogue. The loans to the exhibition are all of singular importance given the high value of the works and the fact that they need special transport and display conditions. Particularly exceptional is the loan of Van Eyck’s Saint Barbara panel, a masterpiece that has only rarely been seen outside the galleries of the Koninklijk Museum voor Schone Kunsten in Antwerp and which will be shown in Spain for the first time. Also outstanding are the two key panels from Hans Memling’s Annunciation, loaned by the Groeningemuseum in Bruges. Finally, the manuscripts on display constitute an exceptional group that includes magnificent sheets decorated with some of the finest grisaille illuminations to have survived.

Painting in tones of grey, semi-grisailles and monochromatic paintings

The term “grisaille” means “painting in grey tones” and derives from the French word gris. It has traditionally been used by art historians to describe the monochromatic depictions that appeared from the 14th century onwards, although its modern-day usage – referring exclusively to paintings in tones of grey – is not documented until the 17th century, the high point of the technique in the Low Countries. In the 15th and 16th centuries other terms were used for works of that type, including “de noir et de blanc” (in black and white), and “color lapidum” (painting in stone colour). In the late Middle Ages grisaille was considered a separate artistic category and it is to be found on a wide variety of supports and in different techniques, from mural and fresco painting to painting on panel, canvas, textiles and glass, as well as miniatures and drawings. It was extremely highly esteemed as it was considered to be closer to the artist’s creative process and thus particularly appropriate for displaying his or her talents and technical virtuosity.

As noted above, late medieval grisailles are not just paintings in tones of grey, and the term also covers works in “semi-grisaille”, meaning monochromatic depictions executed in a very limited tonal range and frequently accompanied by the limited use of more intense colours such as red and blue or gold, particularly in the backgrounds. This produced a greater effect of contrast and emphasised the flesh tones of the figures and their sculptural quality. 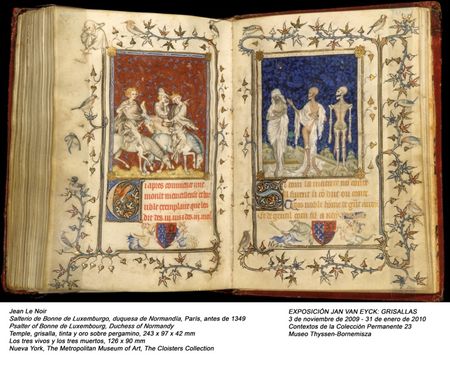 During the period in question there were basically two types of grisaille representation: pictorial works painted in a stony tone that aimed to imitate sculptures (usually on panel) and the grisailles often found in miniatures. Notable among the first group are the images of fictive sculptures that adorned the outer faces of altarpieces and triptychs. They are commonly found in Flemish painting from the last third of the 15th century are also widespread in French and German art. They are generally relatively simple compositions that frequently depict the Annunciation or statues of saints on plinths within their own niche. All the elements are painted and such works are thus considered early examples of trompe l’oeil painting.

The second group, comprising miniature illuminations, is principally characterised by the exclusive use of grisaille to depict the figures. The technique is used to make them stand out from the coloured backgrounds and from the other elements in the spaces or interiors in which they are located, such as the landscape, buildings, altars, thrones, etc. In addition to emphasising the effect of grisaille, the result of this technique is to highlight the volumetric quality of the figures and their artificial nature. From the mid-14th century onwards the use of grisaille became widespread for illuminating manuscripts in Parisian specialist workshops and was extremely popular among the highest levels of French society, for whom these chronicles, religious texts and Books of Hours were intended. The Book of Hours that Charles IV of France gave to his wife Jeanne d’Evreux between 1324 and 1328 was illuminated by the Paris master Jean Pucelle and is considered the first example of this new technique. It includes many of the characteristics subsequently found in grisaille, not just in book illumination (for which it was a highly influential work in the 14th century) but also with regard to the use of grisaille for painting on panel and canvas.

In the section devoted to manuscript illumination the exhibition features outstanding examples by the leading miniaturists of the day both in France and the Low Countries, including Jean Le Noir, Jan Baudolf, Jean d’Orleans, the Masters of the Grisailles of Delft, Simon Marmion and others. The exhibition also includes a small group of sculptures that allows for a comparison of the depiction of sculpted figures in painting with contemporary carved examples. Finally, visitors can see an example of the use of grisaille in textiles in the form of a mitre decorated with Indian ink on white silk.