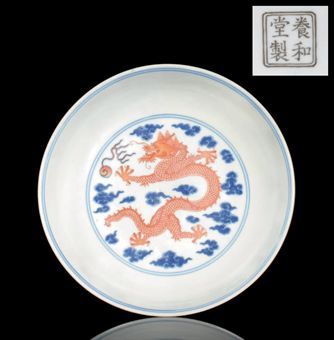 painted to the central well with an iron-red dragon persuing a flaming pearl amongst underglaze blue cloud scrolls, the underside of the rim with two dragons chasing around the exterior of the dish, Yang he tang zhi 'Hall for cultivating harmony' four character mark in black enamel within a double square to the base -- 8 1/8in. (20.7cm.) diam. Est. £3,000 - £5,000 painted in blue to the exterior with the eight Immortals with their various attributes upon a red foaming wave ground, the interior well depicting Shoulao with staff and friendly deer standing upon a similar ground and amongst blue scrollings clouds, Xuande underglaze blue six-character mark to base -- 8¾in. (22.4cm.) diam. approx. Est. £1,000 - £1,500 formed as an open flower with five sectioned petal compartments, each painted with an underglaze red bat motif, the central roundel with a Shou character, the underside densely painted with the eight Immortals portrayed in underglaze blue on a red foaming wave ground, Yang he tang zhi 'Hall for Cultivating Harmony' four character mark in underglaze blue mark to base -- 5 1/8in. (13cm.) wide. Est. £600 - £1,000