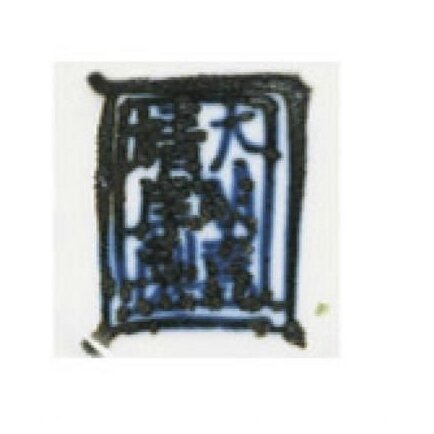 well-potted with steep sides and slightly flared at the rim rising from a short foot rim, the exterior painted with iron-red enamel depicting two 'five-clawed' dragons amongst clouds, all between double-lines both at the lip and at the base, the countersunk base with the underglaze-blue six-character mark within a double-square.

Note: Cups of this form with this design are quite rare and are related to similar examples dating to the Chenghua period. Chenghua reconstructed shard wine cups with similar forms and motifs in overglaze green and yellow enamels, are illustrated in Yuan's and Ming's Imperial Porcelains Unearthed from Jingdezhen, Beijing, 1999, pl. 352. Later examples are quite common. A similar cup from the Qing dynasty, Kangxi period, was sold in these rooms, 8th October 2008, Lot 2576.