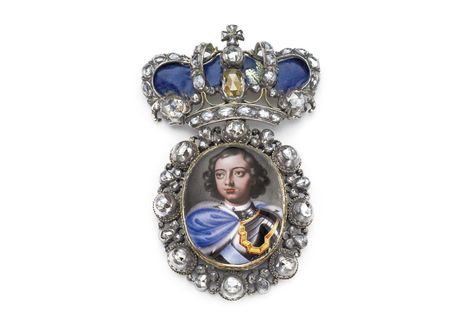 NEW YORK, NY (AP).- A miniature portrait of Czar Peter the Great in a diamond-encrusted frame — owned for decades by an Arizona family that didn't realize its historic significance — is going on the auction block.

The estate of the original owner, George Roberts, learned of its importance during an appraisal over the summer. Roberts purchased it in 1951 from a London dealer.

Experts believe that as few as 10 of the bejeweled miniatures were bestowed by Peter the Great on his subjects for their exceptional service to him. Until the latest discovery, only five were known to exist, three of them in museum collections. They predate the better known Order of St. Andrew award for civilian and military merit.

The 3½-inch-high oval portrait at the upcoming sale depicts Peter the Great in a blue cape and the sash of the Order of St. Andrew. The frame hangs from an imperial crown surrounded with diamonds. The reverse side is engraved with a triple-crowned, imperial double-headed eagle.

While believing it had some value because of the diamonds, Roberts' granddaughter, who lives in northern Arizona and did not want to be identified, had no idea it was an early 18th-century work of historic importance, Sotheby's said. After her grandfather bought it, it spent some time in Illinois where he lived and finally ended up in Arizona where the family kept it in a display cabinet.

It will be sold as part of Sotheby's Russian Art sale.

The miniature portrait is just one example of rare Russian treasures being discovered in unusual places in American collections.

Sotheby's expert Sonya Bekkerman said that last year it sold three works by Boris Grigoriev for $8.1 million that had been discovered tucked away in the Berkshire Museum of Art in Pittsfield, Mass. One of the works set an auction record for the artist.

In another case, Bekkerman said she received an e-mail from a man asking about the value of a painting he planned to offer on eBay for $5,000.

"When I opened the e-mail, it was absolutely divine. It was a work by Boris Grigoriev," said Bekkerman, who hastened to tell the man not to sell it that way.

Sotheby's sold the work, "Sailors at a Cafe, Boui Bouis" for $1.6 million in April 2005 — at the time a record for the artist at auction. Copyright 2009 The Associated Press.

More description about the miniature portrait of Czar Peter the Great :

An oval miniature of Peter the Great dressed in armor with a blue, ermine-edged cape and wearing the sash of the Order of St. Andrew the First Called, enclosed in a diamond-set frame, hinged and hanging from an Imperial crown enameled royal blue and set with numerous diamonds; the reverse with a gold oval plaque engraved with a triple-crowned, Imperial double-headed eagle (the eagle and orb retaining some of the original enameled decoration), the back of the diamonds' settings' enameled in white with red and black ornament.

NOTE: The reign of Tsar Peter the Great marks the beginning of Imperial (rather than Muscovite) Russia, when the country greatly expanded and forged a new relationship with their western European neighbors. To achieve this, Peter had to destroy the power of some of Russia's old hereditary nobility and create new systems of political patronage. It is relatively well known that he achieved this in part by establishing Russia's first honorific orders such as the Order of St. Andrew the First Called. Recipients of this oldest and most important of Russian orders held the title for life; the Tsar also had other ways of recognizing and rewarding those who had rendered unusual service to him. For a very few trusted advisors and others who had accomplished great feats on the behalf of the sovereign, Peter the Great established a tradition of awarding a portrait miniature of himself surrounded by diamonds. Called a znak otlichiia (Award of Distinction) rather than an Order (orden), research currently suggests that the award of the portrait miniatures with diamonds was even a greater honor than being awarded the Order of St. Andrew. Prior to his death, Peter seems to have given out only about ten of the portrait miniatures with diamonds while at least thirty-eight persons had been made cavaliers in the Order of St. Andrew. Portraits of heroes of Peter's day such as Grand Chancellor Alexei Bestuzhev-Riumin indicate that holders of the Order of St. Andrew could also be awarded a portrait miniature with diamonds. While no complete list of recipients exists, research indicates that Aleksei Kelin, one of the heroes of the Battle of Poltava, was awarded a portrait miniature with diamonds as was Peter's mistress, Anna Mons. These awards of distinction generally contain portraits based on Godfrey Kneller's 1698 portrait of Peter I (The Royal Collection, RCIN 405645). Today only six of these portrait miniatures with diamonds are known to exist. Three very similar awards to this currently offered, with blue crowns, are in the collections of the State Diamond Fund, Moscow; the Kremlin Museums, Moscow; and the State Historical Museum, Moscow. An award with a slightly different design (not set entirely with diamonds) was sold by Christie's, New York, October 19, 2001, lot 91. Another similar, but smaller award with a miniature signed by S*** N*** was sold by Sotheby's, London, December 19, 1996, lot 73. A third portrait miniature set with rubies and diamonds is in the collection of the Kremlin Museums (see Russkie emali XI-XIX vv., Moscow, 1974, pp. 174-175 and G.N. Komelova, Russkaia miniatiura na emali, XVIII-nachala XIX veka, St. Petersburg, 2005, p. 21).

Anothers Russian treasures in this sale: 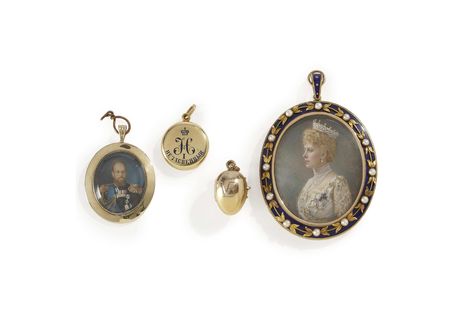 a gold-framed miniature of Emperor Alexander III in uniform with gold epaulettes, wearing the Sash of the Order of St. Andrew, a Cross of St. George, the Stars of various Orders and other medals, after the original by Nikolai Shilder, circa 1890;
a miniature of Alexandra of Denmark, Queen Consort of Edward VII and sister of Empress Maria Fedorovna of Russia, wearing a tiara and pearls, the miniature set in a gold frame enameled blue and decorated with pearl-set gold leaves, circa 1910;
a gold mourning locket for the 1855 death of Emperor Nicholas I with commemorative inscriptions in blue champlevé enamel, the interior with a faded photograph of the tsar, circa 1855; and, a gold egg-shaped pendant locket, the exterior inscribed with the initials VB and the interior with two portraits of women, circa 1900
a miniature of Alexander III signed Vegner in Cyrillic for miniaturist Alexander Vegner; a miniature of Queen Alexandra apparently unmarked;
a mourning locket with maker's mark of Samuel Arnd and 72 standard; an egg pendant locket with unclear marks
Height of the miniature of Alexandra of Denmark: 2 1/8 in. 5.4 cm each hinged rectangular panel enameled a deep pink over a wavy guilloché ground, the oval apertures surrounded by pearls and haging from a bow knot, the border chased with acanthus leaves marked with Cyrillic initials of workmaster, Fabergé in Cyrillic, and 88 standard. Height 5 in. 12.7 cm - Est. 60,000 - 80,000 USD rectangular, enameled translucent oyster on both sides over a sunburst ground, the cover applied with a Russian Imperial double-headed eagle set with a faceted amethyst and with an amethyst thumbpiece marked with initials of workmaster, Fabergé in Cyrillic, and 88 standard. Length 3 3/4 in. 9.5 cm - Est. 30,000 - 50,000 USD A gold, enamel, and diamond brooch, circa 1900. photo Sotheby's 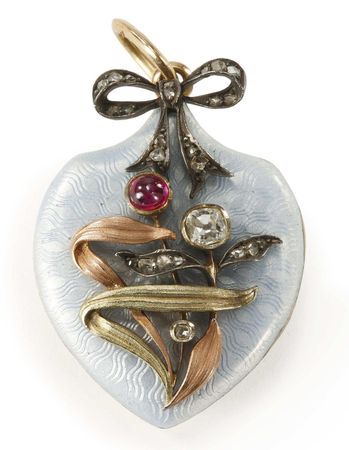 the pendant loop ornamented with a bow set with rose diamonds, the front enameled in translucent oyster over a wavy ground, centered with two flowers, the bud and leaves of one set with diamonds, and the bud of the second set with a ruby and with extravagant varicolored gold leaves, opening to reveal two, tear drop shaped, glass-covered apertures with indistinct maker's mark and 56 standard, and with later Soviet control marks. Height 1 3/8 in. 3.5 cm - Est. 8,000 - 12,000 USD 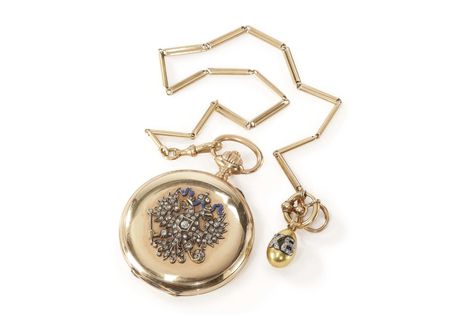 NOTE: Edward Wilhelm Schramm was a well-known supplier to houses such as Fabergé and Bolin. For a diamond and sapphire set, gold bracelet and brooch by Schramm retailed by Bolin, see Géza von Habsburg, et al, Fabergé: Imperial Craftsman and His World, London, 2000, p. 288, fig. 1. of rounded rectangular shape, the surface with banded ribbing, with cabochon sapphire thumbpiece, the surface mounted with a rose-diamond set Imperial double-headed eagle of the era of Alexander I. sold with black and white snapshot of the Imperial family (the Emperor, Empress and two of their daughters) inscribed and dated May 1914 in pencil on the reverse, also with spurious Fabergé mark. Length 3 7/8 in. 9.8 cm - Est. 7,000 - 9,000 USD

LITERATURE: For another gold cigarette case by Bragin set with an Imperial eagle in the same style, see Sotheby's, London, November 28, 2006, lot 163 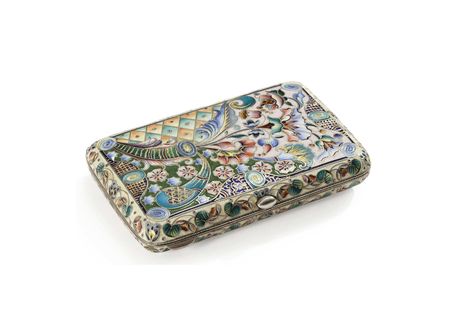 of cube shape, the hinged cover and sides of polished red gold, with spring mechanism activated by a push concealed beneath the clasp set with a cabochon sapphire, the top with pendant loop with maker's mark and 56 standard. Width 1 in. 2.4 cm - Est. 7,000 - 9,000 USD the openwork cross centering on an enamel image of the Virgin Hodigitria, surmounted by a hinged Imperial crown, set with simulated diamonds and amethysts, hanging from a silver chain. Height 6 3/4 in. 17 cm - Est. 5,000 - 7,000 USD