the rounded sides rising from a splayed foot to a straight rim, carved to the interior with a band of peony above a central floral roundel, the exterior carved with ruyi above a band of ascending leaves above the foot well potted with deep rounded sides resting on a small foot, the exterior carved with numerous long narrow leaves radiating from the foot to just below the rim, the interior with a mallow floret in the centre and with a key-fret border at the rim, applied overall with an olive-green glaze 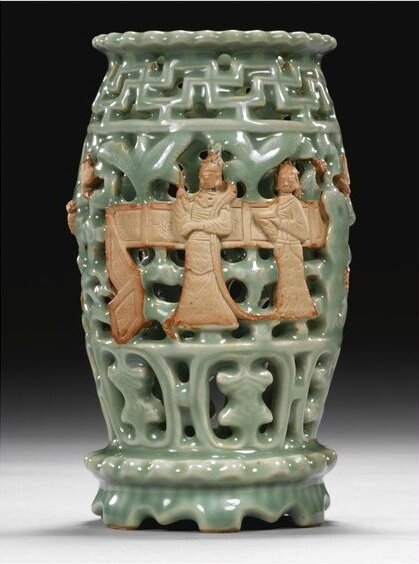 the ovoid body rising from a hexagonally footed base to a flaring foliate rim, carved, incised and pierced around the exterior with a broad band of Immortals in biscuit in a garden, all between lappet and wan bands and covered overall in a rich bluish-green glaze.

Note: See a Longquan celadon lantern of related form, but the central openwork band decorated with a composite foliate scroll rather than biscuit figures as seen on the present vessel, illustrated in Longquan qingci, Beijing, 1966, pl. 64. Another closely related lantern, from the collection of Mrs. Norma Schofield, was sold at Christie's New York, 6th June 1985, lot 388; and one of the type but decorated with glazed figures was sold in our Hong Kong rooms, 3rd May 1994, lot 28. 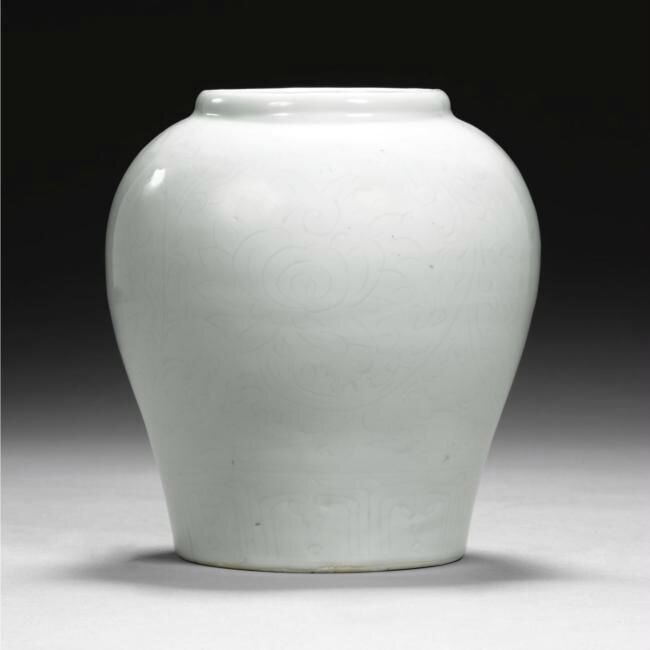 the broad shouldered baluster body rising from a recessed base to a short tapering neck, freely incised around the exterior with a broad leafy lotus scroll band, all above a lotus-lappet band and covered overall in a milky-white glaze.

Note: Jiajing jars of this type are reminiscent of a group of early ceremonial white wares of Yongle's reign.

Compare a larger white-glazed jar of the 16th century, but without any decoration, illustrated in John Alexander Pope, Chinese Porcelains from the Ardebil Shrine, Washington, 1956, pl. 115, no. 29.773. See also a jar incised with a striding five-clawed dragon chasing a flaming pearl amidst clouds of scrolls, sold at Christie's London, 7th June 2004, lot 4; and another 'dragon' jar, from the Hall Family collection, offered in our Hong Kong rooms, 2nd May 2000, lot 515.