Christie’s is honoured to announce the sale of a perfect 62.30 carat D colour, Flawless, pear-shaped diamond which will lead the auction of magnificent jewels in Geneva on November 18. An extraordinary gem of excellent polish and symmetry, this diamond exemplifies the best criteria of the 4 C’s: Colour, Clarity, Cut and Carat. It is one of the most important D colour Flawless diamonds to be offered at auction in many years (estimate on request). It's accompanied by report no. 2105486895 dated 19 December 2008 from the GIA Gemological Institute of America stating that the diamond is D colour, Flawless clarity, Excellent Polish, Excellent Symmetry, with an appendix stating that the diamond 'has been determined to be a Type IIa diamond, the most chemically pure type of diamond'.

Jean-Marc Lunel, Head of the Sale : “With a beautiful selection of 215 carefully chosen lots, Christie’s fall auction of magnificent jewels in Geneva reflects the current demand for fine quality gemstones and signed vintage jewellery, presented with attractive estimates. An emphasis has been placed on items with a private provenance, which are fresh to the market and traditionally appeal to both professionals and international private collectors. Highlighting the sale is a perfect 62.30 carat pearshaped diamond. It is one of the most important D colour, Flawless diamonds to be offered at auction in many years." 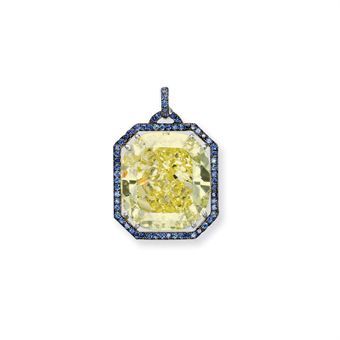 Notes: A naturally coloured green diamond is a true rarity of nature. Following red, and ahead of even blue and orange, green is one of the rarest colours in which to find naturally occurring diamonds, and any gem over three or four carats in this hue is an exciting find. Unlike other colours, green is caused by natural irradiation in the earth, probably after the stone's formation. According to Ian Balfour in his book 'Famous Diamonds':
'The green colour is usually caused by the crystal's coming in contact with a radioactive source at some moment during its lifetime and in geological terms, this is measured in millions of years. The most common form of irradiation encountered by diamonds is by the alpha particles which are present in the magma or kimberlite in minute quantities.' Furthermore, the 'intense green' grade given to this diamond is an extremely sought-after title, as is the extraordinary evenness of colour saturation throughout the diamond. More often that not, any hint of green in a diamond is affected by an outer green 'skin' on the stone, which rarely permeates the full crystal, giving such a beautifully even and true colour, as is the case here.

Completely fresh to the market are also a superb 3.30 carat fancy intense blue diamond of potentially Flawless clarity, set in a twin stone ring together with an important E colour diamond of 3.90 carats (estimate: SFr.500,000-650,000) and a fancy vivid, fancy intense and fancy blue diamond clasp (estimate: SFr.380,000-480,000), both with a private provenance. Also featured is the largest recorded 19.13 carat fancy greyish yellowish green “chameleon” briolette-cut diamond in the world, mounted as a pendant (estimate: SFr.420,000-630,000). Accompanied by report no. 5101999840 dated 12 August 2009 from the GIA Gemological Institute of America stating that the diamond weighing 3.90 carats is E colour, VS2 clarity

Notes: The current owner's great grandfather was the President of Union Minière (formerly Belgium Congo). The diamonds have been in the family since they were found circa 1930 and were subsequently mounted by Wolfers.

The fancy greyish yellowish green "chameleon" briolette-cut diamond weighing 19.13 carats suspending from a purple-pink briolette-cut diamond weighing 1.63 carats and a briolette-cut diamond weighing 5.08 carats, with triple micro pavé diamond rondelles, to the fine link chain, mounted in platinum and 18k rose gold, pendant 7.1 cm long - Estimate CHF420,000 - CHF630,000 ($413,731 - $620,597)
Accompanied by report no. 16796492 dated 11 January 2008 from the GIA Gemological Institute of America stating that the diamond is Fancy Grayish Yellowish Green colour, natural color, VS1 clarity
The color of this diamond changes temporarily when gently heated, or when left in darkness for a period of time and is known in the trade as "CHAMELEON"

Accompanied by report no. 17189123 dated 4 June 2008 from the GIA Gemological Institute of America stating that the diamond is Fancy Intense Purple-Pink colour, natural color, VS1 clarity

Accompanied by report no. 15678161 dated 24 January 2007 from the GIA Gemological Institute of America stating that the diamond is E color, VS2 clarity Accompanied by report and special note no. 54632 dated 2 October 2009 from the SSEF Swiss Gemmological Institute stating that the ruby is of Burmese origin, with no indications of thermal enhancement, and that this gemstone was already described on Gemstone report no. 32585 dated 26 August 1998

Notes: The special notes from the laboratories highlight the quality and rarity of this gem.
'Large rubies of top gem-quality are true rarities of nature... During the last couple of years, the supply of gem-quality rubies decreased... As a result, large, natural, untreated rubies of almost any geographic origin have become even more difficult to find on the market today'.
Gübelin Gem Lab, 22 September 2009
'The natural ruby described...possesses extraordinary characteristics and merits a special mention and appreciation. The described gemstone of 7.035 ct exhibits a well-saturated colour combined with a pleasant clarity. The stone has been spared to exposure of thermal treatment and its clarity and colour are natural'.
SSEF Swiss Gemmological Institute, 2 October 2009 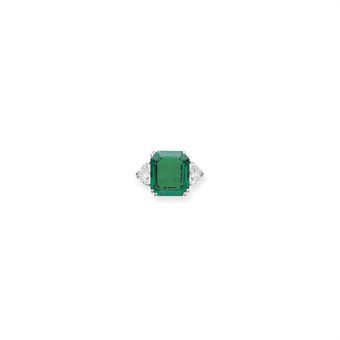 In the unusual shape of a flower vase, a sophisticated onyx and diamond pendant necklace made by Cartier in 1914 is a superb example of the black and white geometric style of early Art Deco creations (estimate: SFr.50,000-65,000). Purchased at Cartier by the famous art collector Calouste Gulbenkian, who had a passion for jewellery, this pendant (transformed from the original brooch in the 1920s) was owned by another great philanthropist: the English racehorse owner Washington Singer. Among other jewels dated from the same decade is an exceptional Art Deco diamond sautoir by famous American jeweller J.E. Caldwell, which is featured with an estimate of SFr.480,000-580,000. The pendant designed as a pavé-set diamond amphora decorated with onyx foliate motifs and panels containing floral sprays to the twin leaf surmount and backchain, 1914, originally made as a corsage brooch, pendant and surmount 9.8 cm long, with French assay mark for platinum, in pink leather fitted case from the 1920s. Signed Cartier Paris, with maker's mark H P for Henri Picq - Estimate CHF50,000 - CHF65,000 ($49,254 - $64,030).
Accompanied by certificate of authenticity no. GE2009-115 dated 8 September 2009 from Cartier stating that the pendant with necklet is a genuine Cartier item, Cartier Paris, 1914

Calouste Gulbenkian was an Armenian businessman, philanthropist and one of the world's greatest art collectors. His financial success in the oil industry, including arranging the 1907 Royal Dutch/Shell merger and creating the Turkish Petroleum Company, gave him the means to amass a world renowned art collection which he kept in a private museum in Paris. Amongst his greatest passions were Renaissance paintings and Egyptian sculpture, fine examples of which he lent both to the National Gallery in London and the British Museum during his lifetime, and, of course, jewellery. His famed collection of Lalique, together with the rest of his art, was bequeathed to the Calouste Gulbenkian Foundation in 1955, and is probably the most important of its type worldwide. However, his relationship with other French jewellers, specifically Cartier, has been less well referenced yet was extremely strong. In the 1910s and 1920s Gulbenkian acquired a significant number of jewels produced by arguably the greatest jeweller of the 20th century at the most innovative period in jewellery design.

After Gulbenkian, the Cartier pendant belonged to another great philanthropist, the English racehorse owner, Washington Singer. His father was the great American sewing machine magnate, Isaac Singer, who moved his family to England while the children were still young. Washington grew up in Devon, becoming a great benefactor to a variety of charitable causes, including the (later known as) University of Exeter. 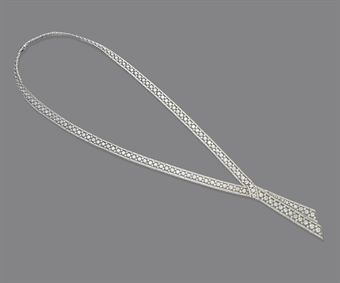 Notes: James Emmett Caldwell (1813-1881) began his career as an apprentice to a silversmith in Philadelphia. In the early 1830s, he opened his own watch and jewellery shop which became known as J.E. Caldwell & Company in 1848. The name is most closely associated with chic and elegant jewels from the Art Deco period of which this extraordinary sautoir must have counted as a masterpiece. The delicate millegrain setting, strong Art Deco line and technical flexibility-mimicking the flowing movement of a genuine cravate- have together created a rare, yet timeless jewel.