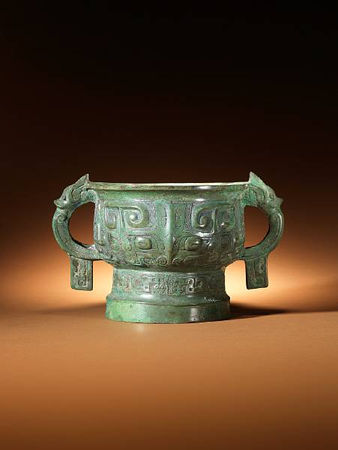 Bronze Age Chinese vessels from one of the finest old English collections, formed by the 2nd Lord Cunliffe between the darkest war years of the early 1940s, and his death in 1963, achieved astonishing prices at Bonhams sale of Chinese Art today, November 5, in London.

The most important group of early Chinese bronzes ever offered at Bonhams, the Collection mainly comprised classic funerary vessel dating from the 12th to 2nd century BC. The auction achieved a total of £4.936,300 and the Cunliffe items in the sale went like fireworks, appropriately enough given the date – November 5. 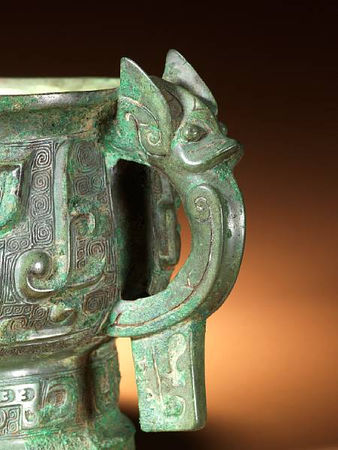 The bombé sides rising from a high stepped foot to a flared rim, cast on each side with loop handles emerging from mythical-beast heads with upright horns, with heavy rectangular pendants below, each side of the body cast with bold taotie masks reserved on intaglio scrolls, cast with a border of eight small S-shaped snakes at the foot. 26.7cm (10½in) wide. Sold for £490,400

Compare a very similar gui, dated to the late Shang/early Western Zhou Dynasty in the Musée Guimet, illustrated by M. Girard-Geslan, Bronzes Archaïques de Chine, Paris, 1995, pp.35-7. The same border of eight scrolling snakes can be seen on a similar early Western Zhou gui in the Sackler collection, illustrated by J.Rawson, Western Zhou Ritual Bronzes from the Arthur M.Sackler Collections, Vol.IIB, Massachusetts, 1990, no.36. Another gui vessel of this form is illustrated in Masterworks of Chinese Bronze in the National Palace Museum, 1969, fig.16. A comparable gui was sold at Christie's New York, 19 September 2007, lot 204, and another from the Concordia House Collection was sold at Sotheby's New York, 19 March 2007, lot 75. 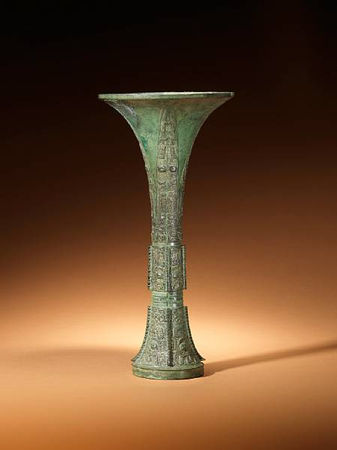 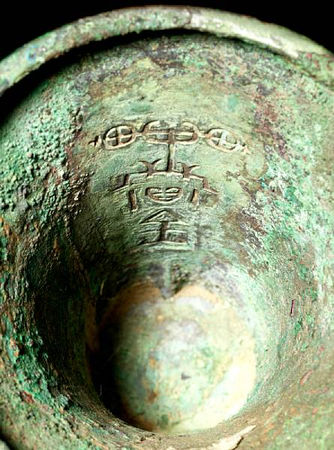 Of slender form rising from a hollow base to a trumpet mouth, crisply cast with four tapering blades cast with raised bosses and swirls against a leiwen ground, emerging from a band of snake motifs, the foot and middle section separated by two raised concentric bands, divided by segmented flanges and similarly depicting taotie masks reserved on a leiwen ground, the interior of the foot cast with three pictograms, reading Yang Ze Che. 32.5cm (12¾in) high. - Sold for £378,400

Illustrated: E.E.Bluett, Chinese Works of Art in English Collections. I - Early Jades and Metal-work in the Collection of the Rt.Hon.Lord Cunliffe, Apollo, March 1957, p.84, fig.IX.

This lot will be sold with a copy of the original report on the inscription by W.Perceval Yetts, dated April 1939 which suggests that the inscription may refer to a personal name.

The decorative elements on the current gu vessel indicate a 12th century BC dating as consistent with the Style V period of Shang bronze production. The high-relief casting bears closest resemblance to an example of similar size, illustrated by R.W.Bagley, Shang Ritual Bronzes in the Arthur M.Sackler Collections, Washington D.C., 1987, no.36. Compare also a related example dated to the late Shang Period, excavated in Henan Province in 1978 and currently in the CASS Institute of Archaeology, which is published in Zhongguo qingtong qitu ji, Beijing, 2005, p.118.

Colin Sheaf, Head of Asian Art at Bonhams, and the company's Deputy Chairman, said after the sale: "The message we heard today from Asian Art collectors is that the recession is officially over as far as Chinese art collectors are concerned. The sale proves one of the great truths of auctioneering, that the best and rarest items hold and exceed their value even in bad times. It has been a great pleasure to take a sale that so rousingly endorses the strength of the Asian Art market."

English collectors were among the most prominent Western collectors of Chinese art in the mid 20th century, but very few collections formed at that time remain in private hands, as did the Cunliffe Collection.

Wing Commander Lord Cunliffe's son, Roger, the 3rd Lord Cunliffe, says of his father's collecting during the war: "There weren't many people buying fragile porcelain as the flying bombs rained down. What makes this even more extraordinary is the fact that he lived in a top floor flat in London's West End. A countryman at heart my father always had his city suits made with a poacher's pocket. How better to discreetly bring home a Palace bowl?"

The Bonhams sale of the Cunliffe will draw international interest from private and museum buyers, attracted to exhibited and published bronzes which have remained unseen in private hands for over fifty years. Given the international restrictions of selling archaeological treasures (like outstanding bronzes) whose origins are undocumented, the excellent old pedigree of this famous English collection will encourage public bodies to bid and buy, confident that the date of original acquisition in London falls well outside the restricted decades.

The 2nd Baron Cunliffe (1899 1963) was fortunate to be buying in London when fine Chinese material was being offered for sale week after week at auction and by dealers, and Asian buyers were not yet the purchasing force that they have now become. Great fellow collectors had included George Eumorfopoulos, Sir Percival David, Mrs Sedgwick and Oscar Raphael, many of whose collections subsequently entered national museums.

During his lifetime, Lord Cunliffe's acquisitions were available for enthusiasts to study in his spacious flat across Carlos Place from the Connaught Hotel, conveniently placed for buying trips at London's major Chinese ceramics dealers, Bluetts, Sparks, Spinks and Peter Boode. In 1923, the foundation of the Oriental Ceramic Society had given English collectors a unique forum in which information could be disseminated, opinions canvasses and exhibitions held. Many Cunliffe items, including selections from the bronzes, were generously loaned to the Society's ground-breaking exhibitions during the 1940s and 50s. The Collection to be offered in November is particularly striking because of the rarity and outstanding condition of the bronzes to be offered.

The wise words – 'Love your people as you would your own children' - on the seal of a Chinese Emperor who ruled a century ago were not enough to save his reign during the Boxer Rebellion around 1900.

The Imperial white jade double-dragon seal was estimated to sell for £100,000 to £150,000 at Bonhams sale of Fine Chinese Art in New Bond Street on 5th November during Asian Art week in London bit In the event it went for a massive £305,600.

Asaph Hyman, Senior Specialist in Chinese Art at Bonhams, comments: "Once in a while an object of unique Imperial Chinese importance emerges which causes one to catch one's breath, holding in one's hands a personal object used by an Emperor that exceptionally captures his love for his people as shown in his attempt at reform. It is a great privilege to be selling such an extraordinary, fine and rare seal."

The use of such a benevolent message on his seal seems appropriate for the young ruler of a country determined to introduce reform presented by Imperial initiative. But such benevolence was in vain.

The short reign of the Guangxu Emperor was witness to one of the most disruptive periods in the dynasty. Increased and intensified imperialist expansion led to the growth of the nationalist group, Boxers United in Righteousness, who by 1900 were openly attacking, and sometimes killing, Chinese converts and those who possessed foreign objects, as well as foreigners themselves. This attack came to a climax at the siege of the Legations. The rectangular seal surmounted with a pair of addorsed dragons, each recumbent with bulging eyes and a scaly conjoined body arching over swirling clouds pierced with an aperture for attachment, the base carved with four characters reading 'Airen Ruzi' within a border of scrolling tendrils, the stone of a pale white tone with small areas of opaque inclusions. 11.2cm (4¼in) long. Sold for £322,400

Provenance: a European private collection, purchased before 1966, and thence by descent.

The current seal has been identified as being in the personal use of the Guangxu Emperor. The four-character 'Ai Min Ru Zi' inscription can be translated as 'Love your people as you would your own children'. These four characters have been identified by Guo Fuxiang, Researcher at the Department of the Palace History, The Palace Museum, Beijing, as one of the personal impressions used by the Guangxu Emperor. See his article 'Qingdao Huanghou Xiyin de Zhizuo' (The Manufacture of Imperial seals for the Empresses of the Qing Dynasty), p.26, where this impression is listed among the twenty-eight Guangxu Imperial seals held in the Imperial collection in the Forbidden City. The use of such a benevolent message also seems appropriate for the young ruler of a country determined to introduce reform presented by Imperial initiative. It is interesting to compare a wood Guangxu Imperial seal illustrated in the article (fig.1) which bears relation to the present seal in its long rectangular form surmounted by double-dragons.

Imperial seals belonging to the Guangxu Emperor are rare, with the majority of published examples being of relatively lesser material, reflecting the financial constraints of the period. Two Imperial green jade 'double-dragon' seals in the Fitzwilliam Museum in Cambridge have been identified as having belonged to the Emperor Guangxu and the Dowager Cixi, and are believed to have been looted in 1900 during the Boxer Rebellion, see J.P.Palmer, Jade, London, 1967, Catalogue no.36, and illustrated again by J.C.S.Lin, The Immortal Stone. Chinese Jades from the Neolithic period to the twentieth century, London, 2009, Catalogue no. 82 and 84, as well as no. 83. A gold single-headed dragon seal in the Palace Museum, Beijing is identified as having been given to the Guangxu Emperor on his 13th birthday in 1889, illustrated in Gugong Zhenbao, Beijing, 2006, p.26. The limited availability of good-quality jade stone during the period is demonstrated by the use of serpentine and wood in the production of Imperial seals. Several 'double-dragon' seals belonging to the Dowager Cixi in serpentine are known, see an example sold at Christie's Paris, 14 June 2006, lot 139. Apart from the published example in the Palace Museum, another wood 'double-dragon' seal belonging to the Guangxu Emperor was sold at Sotheby's Paris, 11 June 2009, lot 223.

The short reign of the Guangxu Emperor was witness to one of the most disruptive periods in the dynasty. Increased and intensified imperialist expansion led to the growth of the nationalist group, Boxers United in Righteousness, who by 1900 were openly attacking, and sometimes killing, Chinese converts and those who possessed foreign objects, as well as foreigners themselves. In retaliation, on August 4 1900, 20,000 foreign troops marched on Beijing, leading the Guangxu Emperor and the Dowager Cixi to flee to Xi'an, where they would stay until 1902. The era of disruption continuted onto the short reign period of the Xuantong Emperor, more commonly known as Pu Yi, a time in which Imperial treasures were sold to finance the expenses of the Court or stolen by Eunuchs working in the Forbidden City.

The current jade seal illustrates the mastery of late Imperial jade craftsmanship during the decline of the Qing Dynasty and appears to be one of the best preserved examples of Imperial lapidary work of the period.