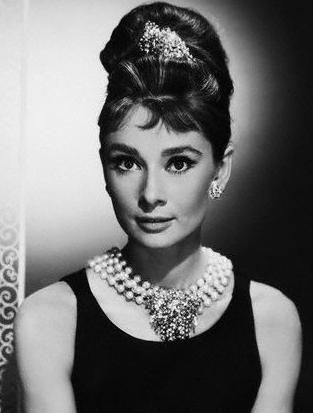 LONDON.- Audrey Hepburn was not just a film star - she was a major style icon of the 20th Century. Simplicity and seemingly effortless elegance was her trademark. Ably aided and abetted by the young couturier Hubert de Givenchy, she became the personification of chic elegance in the 1950s and 60s. Givenchy said of her “All the responsibility for the way Audrey looked is hers. She made the selections.” Audrey was the first actress off-screen who was able to play the part of fashion models on-screen and be credible. For `Funny Face’ in 1957 and many of her other major films, Audrey had it written into her film contracts that de Givenchy would make all the clothes she wore and also astutely had it agreed that she retain the majority of her Parisian wardrobe.

Background
In 1951 Audrey left the Netherlands with her mother Baroness Ella van Heemstra to pursue her dream of becoming a ballerina. The hardships she suffered during the war, (constant anxiety and hunger due to the Nazi occupation of the Netherlands) left her physically weakened. This, combined with her height (5ft 7in) meant that she was rejected for prima ballerina roles. She turned to other possible careers - working in the chorus line, modelling and acting. The rest is history. Ballet’s loss was cinema and the fashion world’s gain.

Living nearby in Mayfair, London was the Star-Busmann family – the father a Netherlands Ambassador, with his wife and their two daughters, one being the 15 year old Tanja. The mothers were lifelong friends as the two young women were also to become. Audrey referred to Tanja as “Darling Chum – cause that’s what you are.” When Audrey was engaged to James Hanson (a marriage that was not to take place) she sent a telegram to Tanja asking her to be her bridesmaid, at the same time swearing her to secrecy. The Star-Busmann family avidly followed every step of Audrey’s career from walk-on parts in Ealing films to becoming a glamorous film star and fashion icon. One letter to Tanja from Audrey dated 1st November 1950 shows her interest in clothes and fashion even at that early stage “I start on ‘Young Wives Tale’ am so thrilled Tanja as it will be my first REAL part in movies…On Tuesday I am going shopping with our wardrobe mistress for my clothes, they will pay for everything, so I get a real kick out of choosing things.” Audrey’s next film was the Ealing comedy “The Lavender Hill Mob” where she met Alec Guinness. He described her thus “She only had half a line to say, and I don’t think she said it in any particular or interesting way. But her faun-like beauty and presence were remarkable.”

In 1951, Audrey left Europe for the USA to star in the Broadway production of ‘Gigi’. She sorted through her unwanted clothes and passed on the things she no longer needed to Tanja. Tanja recalls how this became something of a ‘fabulous tradition’ and describes how cavalcades of boxes would arrive filled to the top with layers of delicious couture and accessories. She said it was “Like Xmas a thousand times over”. This collection is a fraction of Audrey’s original wardrobe - the press at the time made much of the fact that Audrey travelled with upwards of fifty pieces of luggage when she and her husband, the actor Mel Ferrer, were on location.

Hepburn Style
Audrey had a sense of her own unique, personal style. She preferred to wear pastel colours, black and ivory with the occasional hot-pink statement as evidenced by this collection. Edith Head, the multi-Oscar winning film costumier said of her “Like Dietrich, Audrey’s fittings became the ten-hour not the ten-minute variety. She knew exactly how she wanted to look or what worked best for her, yet she was never arrogant or demanding. She had an adorable sweetness that made you feel like a mother getting her only daughter ready for the prom”.

Audrey was 5ft 7inches tall, bust 32in, waist 22in, hips 34in. For most of her life these measurements altered but slightly.

The Collection
There are around thirty six items of clothing on offer dating from 1953 to the late 60s as well as hats, belts and a fascinating group of letters in which she describes an early film break, her proposed wedding to James Hanson and the time she spent filming “Roman Holiday”.

As one might expect the collection includes stunning evening-wear including a plethora of chic little black dresses by Valentino, Elizabeth Arden (she wore this gown when she met her first husband Mel Ferrer in 1953) and of course her favorite designer of all – Hubert de Givenchy. He created a black cloqué silk gown for Audrey to wear for the film 'Paris When it Sizzles' in 1962 (£10-15,000) a sensational Chantilly lace cocktail gown which she wore in the 'How to Steal a Million' in 1966 (£15-20,000) which are included in the auction.

Audrey’s Wedding Dress
The auction also includes the ivory satin bridal gown designed for Audrey Hepburn by the Fontana Sisters for her planned marriage to James (later Lord) Hanson. In 1952, whilst Audrey Hepburn was filming `Roman Holiday' with Gregory Peck in Rome, she approached the Fontana sisters to ask them to make her bridal gown. Signora Micol Fontana said that the 23 year old Hepburn was `young, fresh, on top of the world". She used to slip away from the set to take refuge in the sewing rooms and discuss the dress. "Audrey wanted complete discretion and had lots of fittings”. Some weeks later when Audrey called off the planned wedding to James Hanson she asked the eldest of the sisters - Zoe to give the dress away. "I want my dress to be worn by another girl for her wedding, perhaps someone who couldn't ever afford a dress like mine, the most beautiful, poor Italian girl you can find." Zoe's search centerd on the town of Latina which had been founded by the fascists in 1932. The dress was given to a poverty stricken young Italian girl called Amabile Altobella, which coincidentally was the same Christian name as the Fontana sister's mother. Amabile visited Rome just once to have the dress adapted by the Fontana sisters for her to wear at her own wedding to farm worker Adelino Solda with whom she remained happily married, producing three daughters and five grandchildren. Amabile said "I have had a happy marriage, so the dress brought me luck". The town council gave the young couple kitchen furniture and even organised a honeymoon for them in Paris. After the event she carefully wrapped the dress in tissue paper and stored it away without disturbing it for decades. It was not until 2002, when Micol Fontana, the last survivor of the three sisters traced the gown for a retrospective exhibition of their work that it was re-discovered. It is sold with a photograph of Audrey wearing the original Fontana gown and a letter from the vendor confirming the provenance. It is estimated to fetch £8000-12000.

Value
It is difficult to predict prices in such a unique sale, however, it is hoped the sale will raise over £100,000. Estimates start at £400.The majority of Audrey Hepburn’s wardrobe remains in private hands – held mainly by the Audrey Hepburn Children’s Foundation and the Givenchy Archive. Very few pieces of Audrey’s clothing have ever come onto the open market. This is a once in a lifetime opportunity for Audrey Hepburn fans to acquire a little bit of that Hepburn magic.

50% of the sale proceeds of lots will be donated go to The Audrey Hepburn Children's Fund. www.audreyhepburn.com