NEW YORK, NY.- Collectors of fine photography were presented with several exceptional collecting opportunities at Bonhams’ highly anticipated Fine Photography sale on November 10th. Many of the 151 lots presented sparked strong bidding which resulted in a number of lots exceeding their pre-sale estimates.

Amongst the most coveted pieces was a striking work by Edward Weston. The photographer’s 1936 Charis, Santa Monica includes all of the elements for which Weston is known and perfectly displays the photographer’s precise and sharp presentation. Signed, dated, and numbered by the photographer the lot surpassed expectations bringing $109,800 against an estimate of $70,000-90,000.

Another lot of particular interest to collectors was Richard Avedon’s Dovima with Elephants, Cirque d'Hiver, Paris (1955). A prime example of the photographer’s signature style, the photograph features the famous 50’s model, Dovima, glamorously posing in front of circus elephants. Capturing the era’s spirit of sophistication, the lot fetched $30,500.

Greatly surpassing expectations was Martin Munkacsi’s 1934 photograph of artists Frida Kahlo and Diego Rivera. Known for his intimate portraits of notable figures, this lot is exemplary of his work. After a round of excited bidding, the lot more than doubled its estimate of $7,000-10,000 and ultimately realized $23,180.

Also outperforming was Dunes, Oceano, California (1936) by Brett Weston. Showcasing the photographer’s use of high contrast and abstract imagery it clearly conveys the dramatic expansiveness of this natural setting. Estimated at $10,000-15,000, the work drew a final price of $21,960.

Edward S. Curtis’ Mósa-Mohave, also performed strongly. From his 1903 book The North American Indian, the mesmerizing photograph shows both his mastery of technique as well as his total respect for the people who were his subject matter. Carrying an estimate of $10,000-15,000 it neatly outperformed fetching $20,740.

A work by the iconic Henri Cartier-Bresson lured collectors as well. With a pre-sale estimate of $8,000-12,000, the photographer’s 1954 Rue Mouffetard depicts the type of quintessentially Parisian scene for which Cartier-Bresson is known. Following a round of spirited bidding, the work ultimately sold for $20, 740. 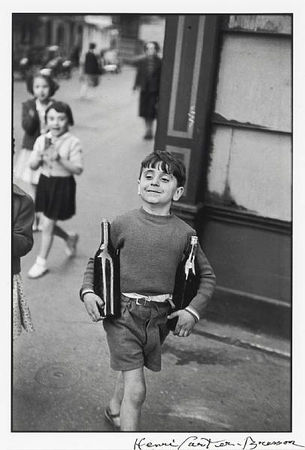