NOTTINGHAM.- A major exhibition of over 60 works by David Hockney from national and international museum collections will open Nottingham Contemporary, one of the most interesting new spaces for art in the UK. Designed by leading architects Caruso St John, the public opening is on Saturday 14 November 2009.

The exhibition will re-examine Hockney's work 1960-1968, his early years in London and Los Angeles, in the context of art today. It is the first time the early work - finishing with the iconic Californian painting A Bigger Splash - has been brought together since the Whitechapel retrospective of 1970, nearly 40 years ago.

The exhibition will occupy two of Nottingham Contemporary's four galleries, a huge combined space of 750 square metres, lit by 133 skylights. "Quite simply it will be one of the best spaces for art and culture anywhere in Britain,” Tate Director Nicholas Serota was recently quoted as saying.

The exhibition is curated by Nottingham Contemporary Director, Alex Farquharson. He is known for his adventurous and popular approach. He co curated British Art Show 6 which attracted 350,000 visitors to four cities and If Everyone Had An Ocean, an exhibition inspired by Beach Boy Brian Wilson, one of the most popular exhibitions ever at Tate St Ives.

About the Hockney show, Alex Farquharson commented: "Hockney, in this period, was at the crest of a wave, not only in the artistic avantgarde, but in culture in general. It is a fascinating trajectory, from his first idiosyncratic takes on abstraction in 1960 to his unforgettable representations of southern California several years on. Allusions to this work abound in art today – in the work of Elizabeth Peyton, Jack Pierson and Frances Stark, to cite just three important examples. It feels absolutely the right time to be revisiting this work now.”

Also on show for the opening of Nottingham Contemporary will be an exhibition of new and recent work by Frances Stark, one of the most fascinating artists to have emerged from Los Angeles’s vibrant art scene in the past 15 years. This is her first solo exhibition in a British public gallery and it will travel to CCA Glasgow. 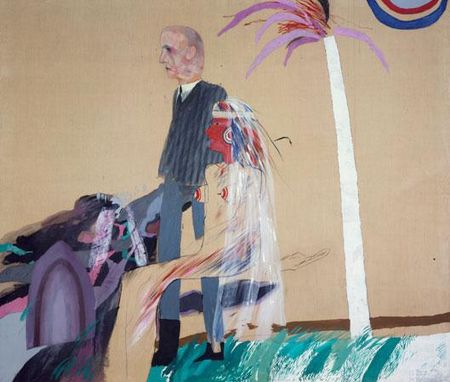 Hockney in the 60s was that rare thing – an artist at the forefront of the avant-garde of the day, and a well-known public figure. With his Yorkshire accent, bleached blond hair, owlish glasses and frank homosexuality he stood out at the Royal College of Art in London.

This exhibition offers a portrait of the artist as a young man, in London and Los Angeles. His work of the time is marked by a unique pictorial wit. It is informed by the books he was reading, places he was visiting, people he desired, lifestyles he aspired to - and the art that inspired him.

At this time Hockney was playing with a multitude of styles. His breakthrough works were inspired by the abstract painting of the time. But they departed from it with their use of autobiographical messages, often code that referred to his current crushes, including his Doll Boy, Cliff Richard.

It is an exhibition full of allusions – to the homoerotic poetry of Walt Whitman and CP Cavafy, to Egyptian archaeology, to Modernism, children’s drawings, furtive graffiti and the flat perfection of commercial art.

Hockney was living mostly in Los Angeles at the end of this period. His paintings of swimming pools, male sunbathers and manicured lawns are iconic and stylised. They are the closest he gets to Pop Art. He had abandoned the use of text, but not the sense of paintings as signs. His work is never simply a window on reality. Instead it makes you aware that you are looking at a fiction composed of elements of reality. In that sense, he is an important forerunner of what would become known as Postmodernism.

Hockney himself is now painting in his native Yorkshire. He continues to marry styles – on canvas, in photography and on his cherished iPhone.