the robustly-potted pear-shaped body rising from a short foot to a tall cylindrical neck, covered overall in a rich lustrous red glaze of crushed raspberry tone draining to a buff tone at the rim. the elegant slender baluster body rising from a narrow recessed base to a tall trumpet neck with everted rim, covered overall with a peachbloom glaze characteristically thinning to white at the rim, wood stand. Quantity: 2. each delicately potted body with rounded sides rising from a short tapering foot, the exterior glazed in a rich ruby-red tone, the interior and base white. Quantity: 2 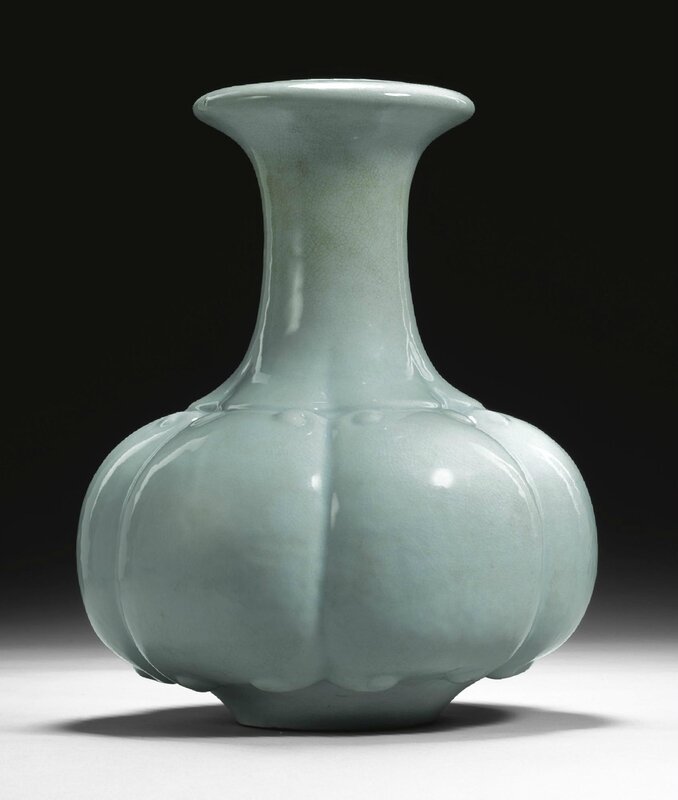 Note: The present vase is an extremely rare and impressive example of the remarkable development in technique designed to meet the specific predilections of the Yongzheng emperor, among which imitation of the antique and innovation were prominent features. Only one other example appears to have been published, but with broad and darker crackles in the glaze, in the Baur Collection, illustrated in John Ayers, Chinese Ceramics in the Baur Collection, vol. 2, Geneva, 1999, pl. 274. Both pieces possess an internal pierced porcelain armature of cylindrical form to support the heavily potted structure, as vessels of this impressive size stood the risk of collapsing during firing, and highlights the technical virtuosity of potters of this period. The rarity of such a piece is not surprising given the high technical and aesthetic standards demanded of the potters in the imperial manufactories.

From the first year of his reign, the Yongzheng emperor commissioned items from the Palace Workshops, whose output changed in nature as a result. Simplicity of form and absence of decoration were stylistic trends introduced by Tang Ying (1682-1756), Superintendent of the Imperial kilns in Jingdezhen. Under his supervision, research into celebrated Song glazes such as Guan and Ge wares saw the re-emergence of monochrome porcelain covered in luminous pale glazes to simulate the earlier wares on contemporary and unique forms.

In form this piece appears to be an amalgamation of porcelain and bronze vessels. The lobed body with tall trumpet neck appears to have been inspired by Ming dynasty bronze vases, such as one included in the exhibition The Second Bronze Age. Later Chinese Metalwork, Sydney L. Moss Ltd., London, 1991, cat. no. 66. The curling fronds seen on the shoulder and base of the Yongzheng vase may also have their origins in the ruyi lappets found on the bronze vase which have been stylised to endow it with a contemporary twist. In its lobed globular body and stalk-like neck, this piece also resembles contemporary vessels in the shape of fruit such as melons and pomegranates; for a melon-shaped jar covered in a teadust glaze, see one in the Qing Court collection and still in Beijing, illustrated in The Complete Collection of Treasures of the Palace Museum. Monochrome Porcelain, Hong Kong, 1999, pl. 253; and a vase in the shape of a pomegranate glazed to simulate Ru ware, in the National Palace Museum, Taipei, published in the Illustrated Catalogue of Ch'ing Dynasty Porcelain, vol. 1, Tokyo, 1980, pl. 126. of archaic jade form, the square section straight-sided body rising from a short spreading circular foot to a narrow tapering circular neck, moulded to each corner with the bagua, the 'Eight Daoist Trigrams', in two tiers framing an undulating raised band, pierced to one side with two pairs of holes for suspension and covered overall in a soft bluish-green glaze.

The shape of this vase is based on Neolithic ritual jades known particularly from the Liangzhu culture, and was revived in Longquan celadon during the Song dynasty. For a Song prototype, see one from the Baron Hatvany Collection, sold in our Hong Kong rooms, 5th November 1996, lot 605; and another vase of similar form and decoration attributed to the Ming dynasty with a crackled Guan-type glaze, from the Qing Court collection and still in Beijing, published in The Complete Collection of Treasures of the Palace Museum. Monochrome Porcelain, Hong Kong, 1999, pl. 199. 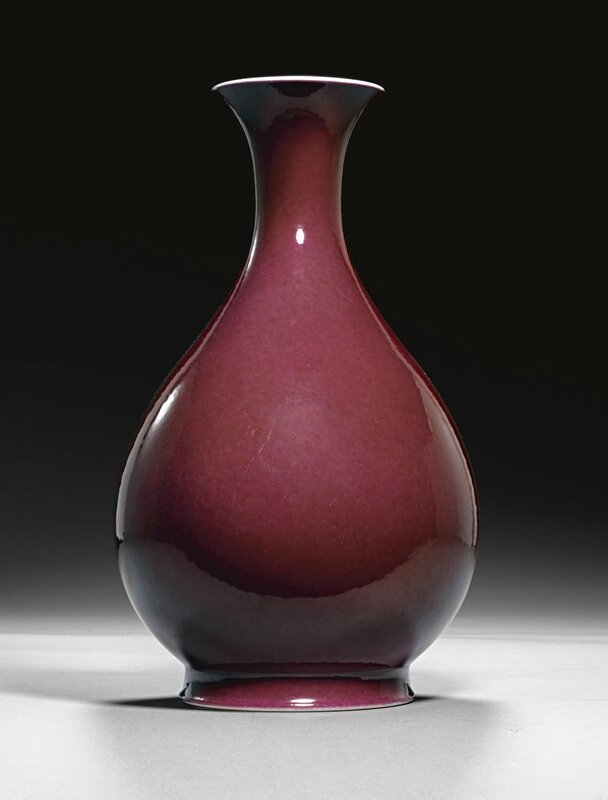 the pear-shaped body rising from a short tapering foot to a tall trumpet neck, covered overall in a rich raspberry-red enamel, the interior and base glazed white. each with shallow rounded sides rising from a short tapering foot to a gently everted rim, covered inside and out with a rich egg-yolk yellow glaze. the slightly compressed globular body rising from a recessed base to an inverted rim and broad mouth, covered around the exterior with a rich red glaze, the interior and base glazed white. 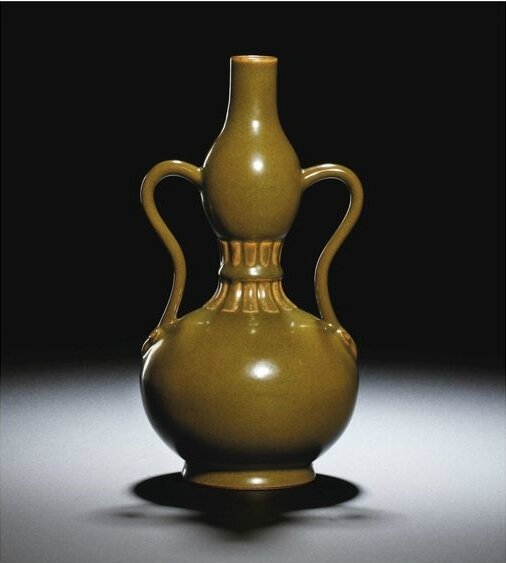 the globular lower body rising to the moulded waist encircled by pendant and upright petal-shaped panels, below the slender upper bulb with straight columnar mouth, flanked by a pair of elegantly curved scroll handles with ruyi terminals, covered overall in an evenly applied 'teadust' glaze of speckled olive-green thinning slightly at the extremities to a light brown, the base applied with a dark brown wash over the incised six-character mark.