The exterior carved with a central taotie band, between a stiff leaf band at the foot and a high relief chilong and bats beneath the rim and a large sinuous chilong forming the handle. 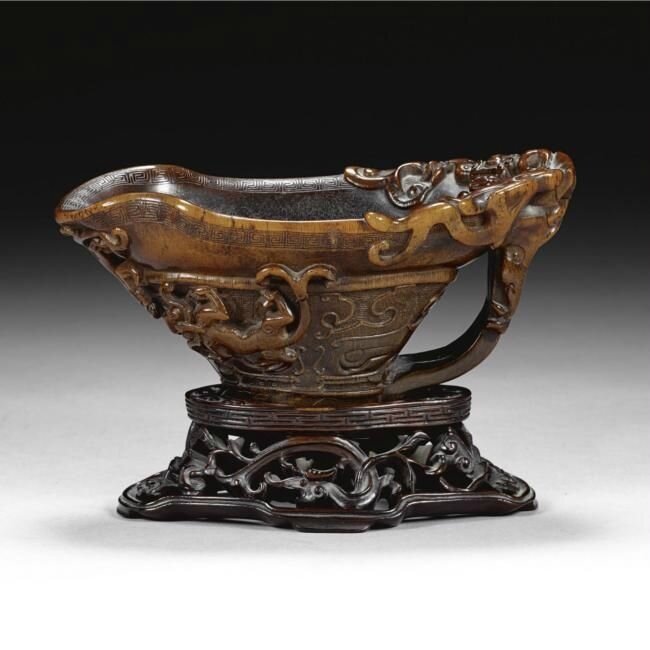 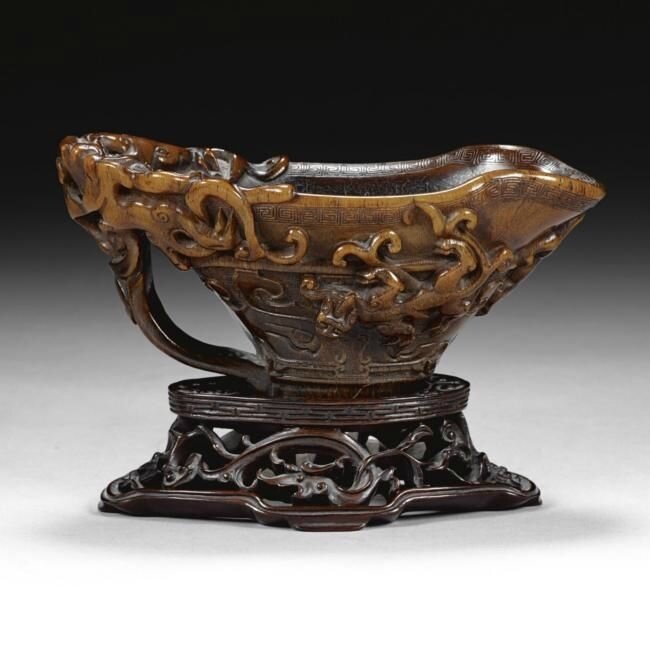 the sides carved with three chilong in high relief over a wide band of taotie, with two further chilong carved to the handle, inscribed to the interior lip Wu Qi Sun, 'The Five Honourable Dragons', with ornate carved and pierced wood stand. naturalistically carved as a large long stemmed lotus leaf with an infurled undulating rim and characteristic veining running down the interior and exterior, further stalks bearing leafs and buds rise up the side of the vessel and are tied together with a ribbon, the horn of rich dark honey tone, carved wood stand. Quantity: 2.

NoteThe present piece is impressive for its deeply undercut forms and rhythmic and naturalistic depiction of the lotus leaves. Carefully carved with meticulous attention to detail, as seen in the delicately curled edges and veins running through the broad leaves, the varying surface textures and interlocking forms combine to create a highly sensuous piece characteristic of seventeenth century rhinoceros horn carving.

Compare a libation cup carved as a lotus leaf, but in lower relief, sold in these rooms, 31st October 1986, lot 175, and again in our Hong Kong rooms, 25th November 1987; another sold in these rooms, 27th October 1989, lot 186; and a third example sold in our New York rooms, 26th February 1983, lot 358. See also a lotus leaf-shape cup decorated with various water plants at Snowshill Manor, Worcester, illustrated in Jan Chapman, The Art of Rhinoceros Horn Carving in China, London, 1999, pl. 210; and another adorned with lotus seed pods, blossoms and qilong, sold in these rooms, 5th November 2008, lot 6.

The lotus plant is one of the most popular decorative themes in the rhinoceros horn carvers' repertoire. Homonymous with the word for peace, the lotus (he) is symbolic of the pure and elevated character of virtuous gentlemen and thus appealed greatly to the literati. Naturalistically carved as a large veined lotus leaf enveloped around the flared sides with leaves and a magnolia flower rising from stalks, a large butterfly perching on the tips of the magnolia petals and further stalks rising from the base to the rim forming the handle, the horn of rich honey tone.