This magnificent mirror with its crisp ornate foliate carving represents the apogee of Italian wood-carving in the late 18th century disseminated by the most celebrated official wood-carver to the Crown, Giuseppe Maria Bonzanigo (1745-1820). The similarity of this mirror to other recorded mirrors by Bonzanigo make it possible to make a firm attribution to him for this piece.

There are four mirrors by Bonzanigo in King Vittorio Emanuele's apartments, in the Palazzina di Caccia, Palazzo di Stupinigi, Turin, illustrated by Ferraris, op. cit., Tav. 6/8, of similar conception ornately carved with flowers and foliage with a similar rectangular framing device with inverted corners to those on this mirror, reproduced here in fig.1. & 2.

Two of these four mirrors are carved with minor variations: e.g. a basket with flowers set to the sides of the stiles. In an account compiled by Bonzanigo in 1784, and published in January of the following year, the four mirrors were described in detail. They were designed for the rooms of Madam Felicità's apartment at Stupinigi.

The painter Michel Rapous was in charge of colouring garlands of leaves and flowers; gilder Ponticelli and glassworker Deangeli also took part in the manufacture of these mirrors. However, the name of the designer of these mirrors is nevertheless unknown. The mirrors seem to match sophisticated designs inspired by works of Leonardo Marini or Charles Randoni as they feature the same construction with interlacing volutes, symmetrically featured on sides of a central decorative motive. Among the drawings published in this book are the sketches probably used as model by Bonzanigo to make a whole series of fans in 1789, made for the Veneria Reale and are now kept in the Stupinigi Hunting Lodge. A drawing by Carlo Randoni, now in the Biblioteca Civica, Turin, for a mirror, from which Bonzanigo must have taken inspiration for this group of mirrors including the present one, is illustrated by Colle, op. cit., p. 252, reproduced here in fig. 3.

Of Piedmontese origin, he settled in Turin in 1773, where he worked as a sculptor, wood-carver and cabinet-maker and where he was granted the patronage of the royal family. The following year he was elected to the Compagnia of San Luca. He worked for the Savoy Court for the next twenty years until the French invasion in 1796. In 1787, he was appointed official wood-carver to the Crown.

In the accounts of the royal family he is recorded as having supplied numerous stools, chairs, armchairs, benches, sofas, screens, beds and mirrors as well as many ornamental panels and chests of drawers for the Royal Palace in Turin and for the royal residences at Moncalieri, Rivoli, Stupinigi and Venaria. His reputation has grown, due in no small part, to the extraordinary quality of his wood carvings in light wood and ivory, the so-called 'microscuIture' which were highly sought after.

Although his work clearly reflects the influence of French style and design, there does not appear to be any documentary evidence that he visited Paris. However, he did exhibit at the 1808 Paris Exhibition. In 1815, with the fall of Napoleon and the return of the Savoy family, he was re-instated as royal sculptor. His justly deserved reputation was such that on his death in 1820, the Gazetta Piemontese wrote 'la bell'arte dell'intaglio ad aItissimo grado di perfezione con quarant'anni di assidue cure...' 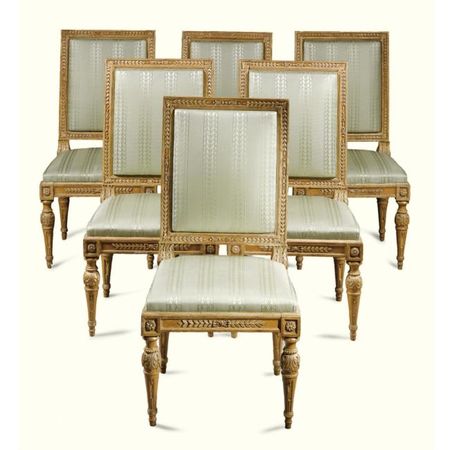 Comparative Literature: Vittorio Viale, Cittá di Torino, Mostra del Barocco Piemontese, Vol.lll, 1963, Tav. 176, fig. b, illustrates a very similar armchair, (one of three armchairs together with four chairs), in cream lacquer with gilded elements and a different top-and-seat rail, in the Appartamento della regina Mario Antonia, Secondo piano, Palazzo Reale, Turin, which would seem to indicate that these very fine chairs are by the same maker as the armchair in the Royal Palace in Turin-see fig.1. The presence of unidentified inventory marks and Roman numbers on the present examples, the existence of six identical stools at Stupinigi and the fact that a few others have appeared on the market all with identical carving, would suggest that the present pair were part of a much larger suite comprising also armchairs and chairs.

An armchair from the same suite is recorded in the Royal Palace of Genoa (Sala degli Arazzi), where it was brought from Turin by the Savoy family (ill. by L. Leoncini, Galleria di Palazzo Reale, Genova, 1996, page 55).

Stools of this type were typical in Piedmontese interiors, especially used to furnish long galleries and therefore often made in large sets. A vast number of stools of various models are still at Stupinigi.

See for example the following identical stools sold at auctiom:

It is interesting to note that an identical pair of French Louis XVI stools was sold, Christie's, New York, Arts of France, 6th October 2001, lot 349, which were stamped N. Foliot. Nicholes Quinibert Foliot, received Master 1776, was one of the greatest menuisiers under Louis XVI and his work was widely appreciated not only in France but throughout Europe. It is not inconceivable therefore that the two stools by him were taken to Turin, which at the time enjoyed close relations with France, in order to be copied by local artisans as this was not an unfamiliar practice. For example, Jean-Baptiste Tilliard supplied a suite of seat furniture to the Duchess of of Parma in 1755 which subsequently was widely copied at the time by Italian craftsmen.

The original commission for the hunting palace of Stupinigi was placed with Filippo Juvara (d. in 1736) by King Vittorio Amadeo II in 1729. Though the king abdicated in 1730 and the architect died in 1736, construction of the magnificent palace continued and was only completed at the end of King Carlo Emanuele III's reign (1730-1773). It was during this time that G. M. Bonzanigo was first employed by the Savoia family, being appointed the wood-carver to Victor-Amadeo III (1773-1796) in 1787. 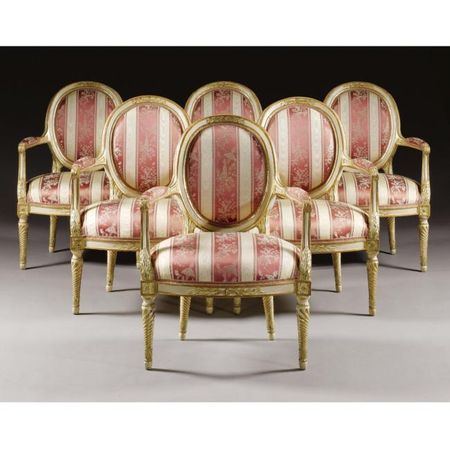 The Valperga di Masino was one of the oldest, wealthiest and most prestigious families of the Italian nobility. For ten centuries the primary residence of the Valperga's was Masino Castle, with halls frescoed and richly furnished in the 17th and 18th centuries. The Madama Reale apartments, decorative salons and a chapel holding the ashes of Arduino of Ivrea, King of Italy in the 11th century, all bore testament to the opulent tastes of the family.
Conte Carlo Francesco Valperga di Masino refurbished the castle during the second half of the 18th century in the fashionable Louis XVI style. The last of the principal line, Conte Carlo Francesco Valperga di Masino died in 1845 leaving no descendants. His wife and heir, Contessa Eufrasia then passed away four years later leaving much of the land, the castle of Masino and a residence in Turin, as well as the family titles to Conte Luigi.

Bartolomeo Manghetti:
Manghetti originated from the Foresto municipality of Lombardy, before moving to Turin and was awarded maestro minusiere from the Università dei Minusieri on the 6th July 1786. Prior to this however, he already worked for the Royal House of Savoy when in 1775 he made the carvings for trumeau at Castello di Moncalieri. Manghetti appeared to have been the main mobiliere documented for supplying furniture to the Viceroy of Sardinia – Carlo Francesco Valperga, Conte di Masino, when work began in 1780 renovating the interior and exterior of his city palace in Turin. The palace was to be remodelled into two apartments and to retain the character of the Castello di Masino, the architects Filippo Castelli and Carlo Randoni were employed, meanwhile the furnishings and decoration were carried out by cabinet-maker Giuseppe Viglione and craftsmen including Francesco Bozzelli, Angelo Maria Pellegrino and Bartolomeo Manghetti.
Various pieces had been commissioned from commodes to suites of seat furniture. Some of the armchairs and sofas can now be seen at the Castello di Masino – in the music room of the Queen's apartments and in the bedroom of those belonging to the Viceroy himself. 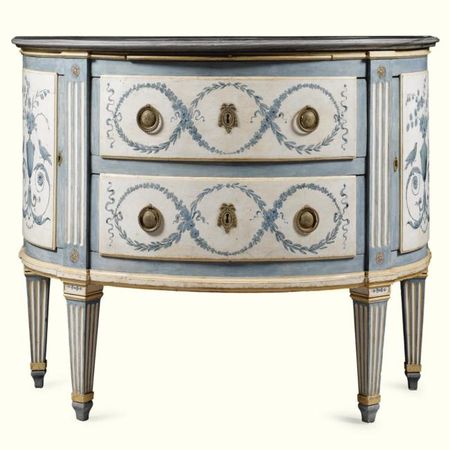 An Italian blue painted and parcel-gilt console table, Piedmontese, circa 1730 A pair of Italian yellow painted stools, Piedmontese, circa 1740. An Italian ivory painted and parcel-gilt footstool, Turin, circa 1760