Painted in underglaze-blue with a vignette of birds amidst foliage and flowers within concentric circles in the centre, and two large vignettes of peacocks and other birds flanked by flowers and foliage around the rim, 24.4cm diam., crossed swords and painter's mark Z in underglaze-blue, incised x inside the footrim - Sold for £7,200

Another example of this very rare pattern is in the Arnhold Collection, New York (Cassidy-Geiger 2008, no. 211), where the author links the plate to the commissions for Augustus the Strong's Japanese Palace in Dresden, based upon the similarity to surviving vase garnitures, and drawings for the palace indicating that plates were intended for the cornices. A rare Meissen kapuzinerbraun-ground pouring cup and saucer, circa 1730

Painted in underglaze-blue in Chinese style with circular medallions depicting a seated figure in a stylised landscape with buildings, enclosed by concentric circles, flowering branches and a trellis band, the saucer handles with flower sprigs, the saucer: 18.5cm across handles, crossed swords marks in underglaze-blue (within concentric circles on the cup) minute flat chip to edge of spout) (2) - Sold for £6,000 A similar plate was sold at Sotheby's New York, The Van Slyke Collection, 26 September 1989, lot 31 and another plate with the same decoration was sold at Christie's London, 10 July 2007, lot 52. Painted in underglaze-blue with the 'Onion Pattern' reserved against a gold ground, possibly gilded in Augsburg, 21.9cm diam. crossed swords mark and indistinct painter's mark in underglaze-blue, impressed 6 or 9 - Sold for £2,160 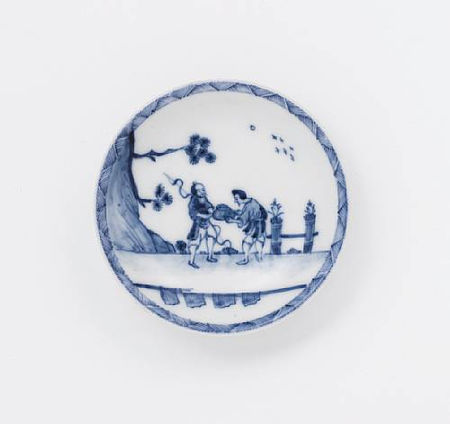 Decorated in underglaze-blue after the Chinese example with two anglers holding a fishing rod and a bamboo basket for fish, pine trees growing from the rocky side, a small stylised sun and birds in the sky, all within a basket weave border, 10.3cm diam., crossed swords mark and k in underglaze-blue, impressed 67 - Sold for £1,200

Based on a Kangxi example.