LONDON.- From a busy saleroom opened to capacity, with two banks of 60 telephone lines reserved to execute bids on behalf of potential buyers, clients enthusiastically competed to acquire a piece of Russian Imperial history in Sotheby’s Sale of ‘Romanov Heirlooms: The Lost Inheritance of the Grand Duchess Maria Pavlovna’. The auction, which saw every lot contested by several bidders, exceeded all pre-sale expectations (estimate: £600,000-900,000) and brought the outstanding total of £7,073,300/$11,658,920. With every lot sold, the auction achieved the status of a ‘White Glove Sale’ and all but one of the lots offered sold for sums in excess of their pre-sale high estimates. New auction records were established for a Fabergé cigarette case and a pair of Fabergé cufflinks.

Commenting on the remarkable results achieved, Sotheby’s Russian Art specialists in charge of the sale, Olga Vaigatcheva and Darin Bloomquist, said: “The extraordinary results of this evening’s sale, which was record-breaking in many ways, are tributes to the exquisite quality, outstanding provenance and romantic story behind this remarkable collection, which had been lost to posterity for almost 90 years until its rediscovery in Sweden earlier this year. In each location where we have exhibited this collection – Moscow, Stockholm and London – we have witnessed unprecedented interest and the global resonance of this sale was evident from the international bidding that we saw tonight, from regions including the CIS, Asia, Middle East, Europe and North America. Successful buyers in tonight’s sale have, without doubt, acquired a piece of Russian Imperial history.”

Sale Highlights:
The extraordinary pace and tone of the auction was set from the moment the auctioneer, Dr Philipp Herzog von Wurttemberg, Managing Director of Sotheby’s Germany, opened the bidding on lot one, a silver cigarette case bearing an enameled portrait of Emperor Alexander II. The cigarette case attracted spirited bidding from several clients, quickly driving the final price paid to £46,850 – almost ten times the high estimate for the piece (lot 1 - estimate: £3,000-5,000). The instant bidding opened on lot two, a silver and enamel cigarette case featuring a photograph of Grand Duchess Maria Pavlovna, a client doubled the bid to £20,000 – the case finally sold for £27,500, almost six times its high estimate (lot 2 - estimate: £3,000-5,000). Two further cigarette cases both realized £601,250. One of them was the Fabergé Imperial Presentation jeweled two-color gold and enamel box, decorated with the diamond-set cipher of Emperor Nicholas II on the lid, with a hand-written note in Russian from the Emperor on the stationery of Empress Alexandra reading: “Alix and I ask you to accept this small present as a souvenir of this day/Nicky”, achieved the joint-second-highest price in the sale. Several bidders competed for the snuff box for several minutes until it finally sold to a buyer in the room for £601,250 – nearly seven times its high estimate (lot 80 - estimate: £70,000-90,000). 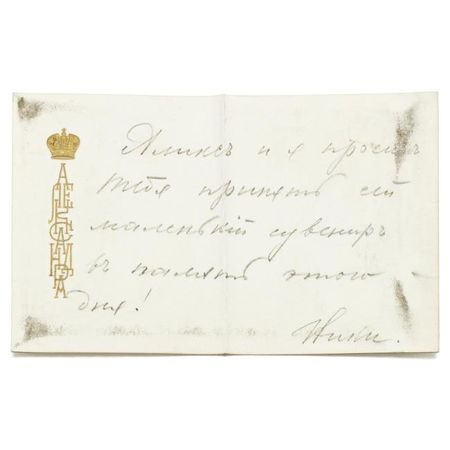 A magnificent Fabergé jeweled gold and enamel cigarette case in rococo taste, made by the workmaster Michael Perchin between 1899 and 1903, achieved the third-highest price in this evening’s auction when it sold to a buyer in the room for £577,250 – more than seven times its pre-sale high estimate (lot 72 – estimate: £60,000-80,000). 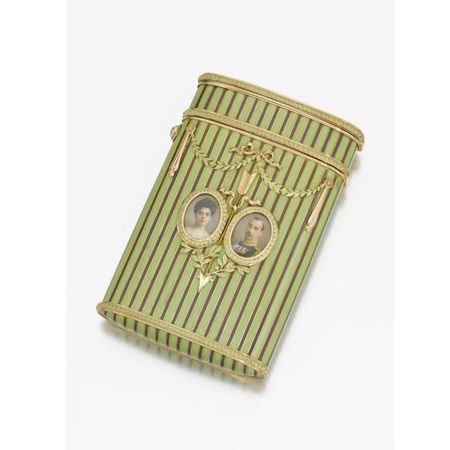 The second highest price for a pair of cufflinks in the sale was for the 11th Wedding Anniversary Fabergé jeweled cufflinks, work-master August Holmström, St Petersburg, 1885, which realized £73,250 – almost 15-times the presale high estimate (lot 104 - estimate: £3,000-5,000).

Other highlights, among the cufflinks sold tonight were: • A pair of Wilhelm I, German Emperor, jeweled gold and enamel cufflinks sold to a telephone bidder for £61,250 – a sum 52-times the pre-sale high estimate (lot 75 – estimate: £800-1,200) - and were possibly a gift to Grand Duke Vladimir Alexandrovich when he went, as official representative of Emperor Alexander III, to Berlin for Wilhelm’s 90th birthday celebrations in 1887.