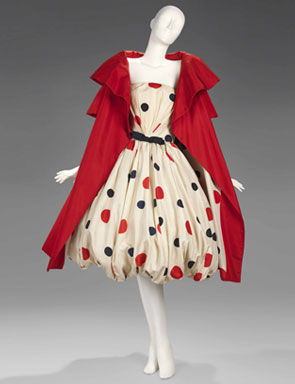 The Brooklyn exhibition will present works dating from the mid-19th-century to the late 20th-century, augmented by a selection of accessories, drawings, sketches, and other fashion-related materials. It will include creations that were milestones in the collection’s acquisition history, many of which were gifts from leaders of fashion and major donors to the Brooklyn Museum.

“This is truly a landmark moment in the history of museum exhibitions. It is at once a celebration of a unique collection-sharing program between Brooklyn and the Metropolitan Museum of Art and a remarkable history of the Brooklyn collection that traces the evolution of fashion in America from its 19th-century European beginnings through the late 20th-century,” comments Brooklyn Museum Director Arnold L. Lehman.

To celebrate the opening of the exhibition, the Brooklyn Ball, the annual benefit gala of the Brooklyn Museum, will take place on Thursday, April 22, 2010. The Brooklyn Ball is the Museum’s major annual fund-raising event.

The exhibition will document the development of the Brooklyn Museum costume collection from its inception in the early 20th-century to its function as a working design lab, and its development into one of the premier costume collections in the country. The story is one of great patrons of fashion—the Hewitt sisters, the women of the Prince family, Millicent Rogers, and Austine Hearst—and great designers.

The exhibition will be organized in groups that represent the most important strengths of the collection. Featured will be works by the first generation of American women designers such as Bonnie Cashin, Elizabeth Hawes, and Claire McCardell, as well as material created by Charles James, Norman Norell, Gilbert Adrian, and other important American designers. Also included will be works by French designers who had an important influence on American women and fashion such as Charles Frederick Worth, Elsa Schiaparelli, Jeanne Lanvin, Jean Paquin, Madeleine Vionnet, and Christian Dior.

The objects range from ball gowns to beachwear. Included are Schiaparelli’s 'Surrealist insect necklace', considered by experts to be one of the most important works in the collection; elaborate ballgowns and day wear by Charles James; evening ensembles by Charles Frederick Worth, Christian Dior, and Mainbocher; street wear by mid-20th-century designers including Vera Maxwell, Claire McCardell, and Elizabeth Hawes; a group of hats by legendary milliner Sally Victor; and dazzling evening wear by Norman Norell.

The Metropolitan Museum of Art’s concurrent exhibition, American Woman: Fashioning a National Identity, is the first drawn from the newly established Brooklyn Museum Costume Collection at the Met. Organized by Andrew Bolton, Curator of the Costume Institute, it explores developing perceptions of the modern American woman from 1890 to 1940 and how they affected the way in which American women are seen today. On view May 5 through August 15, 2010, the exhibition is made possible by Gap with additional support from Condé Nast and will include works by Travis Banton, Gabrielle Chanel, Callot Soeurs, Elizabeth Hawes, Charles James, Jeanne Lanvin, Paul Poiret, Elsa Schiaparelli, Valentina, and Charles Frederick Worth, among others. A catalogue celebrating the Brooklyn Museum collection by Ms. Reeder will accompany the exhibitions.

The Brooklyn Museum’s landmark collection-sharing partnership with the Metropolitan Museum of Art went in to effect in January 2009. At that time Brooklyn’s renowned costume collection of 23,500 objects, acquired over the course of a century of collecting, was transferred to the Costume Institute of the Metropolitan Museum of Art, where it is fully integrated into the Institute’s program of exhibitions, publications, and education initiatives and remains available for exhibition at the Brooklyn Museum.

Prior to the collection transfer, the Brooklyn Museum completed an intensive three-year assessment and photographic documentation of the entire costume collection that was supported by an Andrew W. Mellon Foundation grant of $3,925,000. Portions of the collection are now also available digitally through ARTstor, an online initiative created by the Mellon Foundation that provides access to art images and related data for scholarly and not-for-profit educational use.