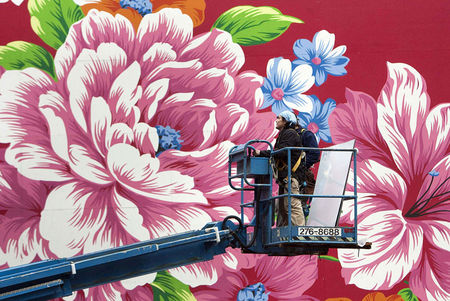 Workers look over a giant mural set up on the outside of the Art Gallery in downtown Vancouver, British Columbia Janaury 17, 2010. The mural is part of a new show inside the gallery by artist Michael Lin. REUTERS/Andy Clark.

“The Vancouver Art Gallery is honoured to play a major role in welcoming the world to Vancouver during the 2010 Winter Games. In 2006, with the support of Vancouver 2010 Cultural Olympiad and the City of Vancouver Public Art Program , we began to organize these groundbreaking projects that allow our dynamic contemporary program to burst onto the city’s streets,” said Vancouver Art Gallery director Kathleen Bartels. “It is thrilling to know that these ambitious works of art will be seen and admired by countless visitors to the city during such an exciting time in Vancouver ’s history. 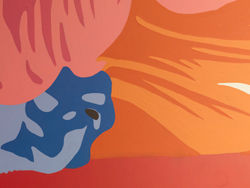 Michael Lin: A Modest Veil – January 23 to May 2, 2010
The Georgia Street Plaza , the largest public square in downtown Vancouver , will be backed by nearly 6,000-square-feet of brilliant colour composing Michael Lin’s massive mural titled Georgia Street Plaza 23.01 - 02.05.10, 2010. Covering the Gallery’s entire northern façade, Lin’s enveloping intervention will dramatically transform this high-traffic area. Thousands of passersby will be invited to reinterpret the altered architecture of the Gallery’s neo-classical building and consider the cultural references and connections created by the artist’s bold floral pattern. Appearing as part of the exhibition Michael Lin: A Modest Veil, Lin’s intervention is joined by a book-wrapping project that will cover hundreds of publications in the Gallery Store and a t-shirt designed by the artist that will clothe frontline Gallery staff. (Illustration: Michael Lin, Georgia Street Plaza 23.01-02.05.10 [detail], 2010. [production image], paint on aluminum panels. Photo: Rachel Topham)

Michael Lin is highly regarded for his monumental installations that reconfigure public space. Born in Tokyo in 1964, the artist was raised in Taiwan and now lives between Brussels , Shanghai and Taipei . His work reflects the influence of these diverse sites of cultural production and his movement between them. He has created monumental works for extraordinary sites around the world, including Towada Art Center, Towada (2008), The Contemporary Museum, Honolulu (2005), Kunsthalle Wien, Vienna (2005), Asian Art Museum, San Francisco (2004), P.S.1, Long Island City (2004) and Musee d’Art Moderne de la Ville de Paris (2002). CUE: Artists’ Videos – January 23 to March 21, 2010
CUE: Artists’ Videos will present the most innovative and compelling local, national and international artists working in film and video today. Presented on a nearly 20-foot, high-resolution LED screen on the Gallery’s Robson Street façade, the series will run daily from 5 am to 2 am. The adjacent Robson Street Plaza , one of the city’s busiest pedestrian hubs, will be particularly lively during the Olympic Winter Games when the area becomes an official site for live entertainment and a major centre for local, national and international media. (Illustration: Oliver Laric, Aircondition [still], 2006; video. Courtesy of the Artist) Videos selected for CUE range from short, dynamic films that surprise and delight to those that probe deeply into the complexities of today’s world. The exhibition includes more than 90 titles by artists from around the globe, including Afghanistan, Canada, China, France, Germany, Iran, Italy, Mexico, The Netherlands, Poland, Romania, Sweden, United Kingdom and United States. For her video The Birth of RMB City, Chinese artist Cao Fei takes viewers into the on-line 3D virtual world Second Life using her avatar China Tracy. For Civilization, Italian artist Marco Brambilla depicts a journey from hell to heaven using digitally-enhanced found film footage. Vancouver ’s Paul Wong presents a year's worth of personal snapshots compiled in chronological order and shown at a rate of 1000 images per minute for the intense viewing experience of Last Year. The works will be presented in seven thematic programs, including Borrowing from Cinema, Constructing Tableaux, Notes on the Everyday, Sight and Sound, History in the Making, Performing for the Camera and Living in the Spectacle. Each program will repeat at various times of the day to maximize viewing opportunities. (Illustration: Guido Van Der Werve, Nummer acht: Everything is going to be alright [production still], 2007. 16 mm film transferred to HD. Courtesy of Monitor Gallery, Rome; Gallery Juliette Jongma, Amsterdam; Marc Foxx, Los Angeles. Photo: Ben Geraerts)

Vancouver Art Gallery Offsite: Ken Lum -- January 23 to September 6, 2010
For his sculptural installation from shangri-la to shangri-la at Vancouver Art Gallery Offsite, artist Ken Lum will construct scale replicas of three squatter’s shacks from North Vancouver ’s Maplewood Mudflats settlement. Located along the area’s intertidal zone from the early 20th century until 1971, the mudflat community was home to a number of artists, writers and activists. For his project, Lum will recreate the cabins of renowned writer Malcolm Lowry, artist Tom Burrows and Greenpeace leader Dr. Paul Spong. Propped up on stilts over the surface of the Offsite reflecting pool, the huts will strike a sharp contrast with the surrounding downtown architecture. Located at the foot of the Shangri-La Hotel, Vancouver’s tallest building, these structures evoke the character of the mudflat community and draw attention to the advance of urban development in the Lower Mainland. (Illustration: Ken Lum, From Shangri-La to Shangri-La, 2010. Architectural rendering by Boelling Smith Design)

Ken Lum is a Vancouver artist whose work questions the relationship between modernism, mass culture and everyday experience, often blurring the boundaries separating high art and popular culture. Over the past twenty years, Lum’s work has been presented in solo exhibitions throughout North America, Europe and Asia . He has also represented Canada at the Istanbul Biennial, São Paulo Biennial, Shanghai Biennale, Gwangju Biennale and Documenta. The Gallery’s Offsite exhibition space near the intersection of Georgia and Thurlow streets in Vancouver ’s downtown core offers a rotating program of innovative public art projects by local and international artists, which respond to the city’s unique urban environment.

Inside the Vancouver Art Gallery
During the 2010 Olympic and Paralympic Winter Games, the Vancouver Art Gallery will present the best of British Columbia to the world and the best of the world in British Columbia . From a landmark exhibition of drawings by Leonardo da Vinci and an arresting presentation of contemporary art based on the human form, to a massive two-floor survey of British Columbia’s visual art, visitors will experience some of the most exciting programming in the Gallery’s history. Thanks to a partnership that will see the Province of British Columbia ’s BC Canada Pavilion located on the fourth floor of the Gallery, all exhibitions will be free to the public during the 17 days of the Olympic Winter Games. Leonardo da Vinci is one of history’s greatest artists. A man of relentless curiosity, Leonardo looked at the world around him with an intensity and power that few others have equalled. He turned his attention to subjects as diverse as the shapes of mountains, the movement of water, the underlying nature of flora and fauna, and created some of the most compellingly accurate images of the human form ever produced.

One of the most important of Leonardo da Vinci’s artistic and scientific investigations of the human body was conducted for a planned treatise on anatomy. To accomplish this, Leonardo appears to have worked with a scientist from the University of Pavia to participate in dissections of corpses, which were rarely performed at the time. These direct observations by Leonardo resulted in an exceptional body of work that remains, to this day, one of the greatest triumphs of drawing and scientific inquiry.

Leonardo’s group of drawings, referred to as the Anatomical Manuscript A, concentrates on the structures of the body and the movements of musculature. Shown for the first time as a complete group in this exhibition, Manuscript A encompasses thirty-four of Leonardo’s pen and ink anatomical drawings on eighteen sheets of paper, rendered during the winter of 1510-1511. Included are the first known accurate depictions of the spinal column and two magisterial sheets depicting the musculature of the lower legs and feet. The works are graciously loaned by Her Majesty Queen Elizabeth II from The Royal Collection, Windsor.

The exhibition will be accompanied by a major book on the drawings with essays by Martin Clayton and Dr. Ron Philo, Senior Lecturer in the Department of Cellular and Structural Biology, in the Graduate School of Biomedical Sciences at The University of Texas Health Science Center at San Antonio. Leonardo da Vinci, fol. 18r, The muscles and tendons of the lower leg and foot, 1510-1511, pen and ink, over traces of black chalk. The Royal Collection © 2009. Her Majesty Queen Elizabeth II Wangechi Mutu, I belong to you, you belong to me, 2007. Ink, paint, mixed media, plant material and plastic pearls on Mylar. Collection Victoria and Warren Miro, London. Copyright the Artist

Visceral Bodies presents the work of contemporary artists who investigate the human form, tracing artistic responses to scientific and medical innovations over the past two decades. Presented in conjunction with Leonardo da Vinci: The Mechanics of Man, the two exhibitions trace the considerable history of artists using the body as a subject of physiological and anatomical study. The contemporary artists included in Visceral Bodies underscore how cultural perceptions of the human body have shifted from an anatomical fact to a perpetually evolving and increasingly artificial or fragmented form.

The exhibition begins with representative works by artists such as Shelagh Keeley and Kiki Smith who approach the body as a symbolic object and create evocative and tactile representations of the human form. These artists are concerned with creating encounters that encourage the viewer to negotiate the political, emotional and gendered meanings of the human body. The exhibition continues with works that draw on advances in medical technologies and the biological sciences to construct new ways of representing the body. Artists such as Gabriel de la Mora, Wim Delvoye, Valie Export and Mona Hatoum borrow the tools of medical imaging to exteriorize what is internal. The exhibition also presents work by artists who imagine a fantastical future where the body has become fragmented and mutated.

Many of the works in Visceral Bodies comment on issues of identity, pathology and normality. Refuting the modernist image of science as an unquestioned source of progress, Visceral Bodies presents a variety of reflections on how the human form can be understood and represented, especially given the ambiguities and provocations of the genetic age.