LONDON.- The Post-War and Contemporary Art Evening Sale will take place on 11 February 2010 at 7pm, and will offer 52 lots with a total pre-sale estimate of £26,290,000 to £38,260,000. The auction will represent a broad spectrum of art from the last 60 years and is highlighted by an important core group of works from the early 1960s including the masterpiece Relief éponge or (RE47II), one of only two gold sponge reliefs ever created by Yves Klein (estimate: £5 million to £7 million), alongside a further important work by the artist, ANT 5, and together with major paintings by Peter Doig, Martin Kippenberger, Raqib Shaw, Neo Rauch, Frank Auerbach, Andy Warhol, and Nicolas de Staël among others.

Francis Outred, Head of Post-War and Contemporary Art, Christie’s Europe: “The auction will offer a diverse selection of art, including a core group of works from the early 1960s which are united by their expression of art during the Space Age – arguably the most influential period of Post-War history. Yves Klein’s masterful, gold ‘Relief éponge’ is the slightly longer of only two works of its kind in existence which sums up many of the artist’s key philosophies, and we are thrilled to be able to present it at auction for the first time alongside the outstanding ‘ANT 5’, the largest of only six such works in his oeuvre which incorporate fire into his renowned Anthropométrie pigment technique. Building on the successes of last year, we are also pleased to be able to offer important works by Peter Doig, Martin Kippenberger and Neo Rauch, all of whose work produced notably strong prices at Christie’s during 2009.”

Almost 50 years ago, Yuri Gagarin became the first human in space. In the same year, President Kennedy declared that the United States would commit itself to land a man on the moon and return him safely to earth by the end of the decade - a feat which they achieved in 1969. One of the most important periods in the history of exploration, and amongst the most defining events in modern history, the Space Age and its consequential effect on technology was to transform the world in the 20th century. This was reflected in art at the time; most noticeably by artists including Yves Klein, Lucio Fontana, Piero Manzoni and Richard Hamilton. The auction in February will offer an important selection of works from the early 1960s, all of which show the powerful influence of Space exploration as it prompted artists to explore spatial and mental boundaries. Relief éponge or (RE47II) by Yves Klein (1928-1962) is the longer of only two gold sponge reliefs ever created by the artist. This pair of works encapsulates the essence of Klein’s art with the marriage of two of his greatest series; the Relief Eponges (Sponge reliefs) and Monogolds. According to Stephen Petersen, ‘He [Klein] not only redefined art in light of the space age; he also redefined the space age in light of his art’, and the present example typifies the artist’s quest to explore spatial boundaries and preconceptions, and the ultimate colour of the void. Executed in 1961, the year in which man first went into space and in which the artist found great fame in the United States, it has since been shown in several of the most important retrospectives of Klein’s work including the 1983 tour of America which traveled to the Guggenheim, New York, the Rice Museum, Houston, and MOCA, Chicago, as well the major Retrospective of 2006 at Centre Georges Pompidou, Paris, where it was the centerpiece to the ‘Gold Room’ with a wall to itself. Formerly in the collection of Francois de Menil, the son of Dominique and Jean, the celebrated collectors, philanthropists and founders of the museum in Houston of the same name, it was acquired directly from him by the present owner circa 1980 and will be offered at auction for the first time. It is expected to realise £5 million to £7 million.

Anthropométrie (ANT 5) by Yves Klein (1928-1962) is the largest of only six works from this celebrated series to incorporate a mixture of fire and blue pigment (estimate: £1.5 million to £2 million). Executed in 1962, shortly before the artist’s premature death at the age of just 34, it is an exceptional example of the Anthropométries series which saw the artist attempt to become one with the immaterial realm through the practice of levitation or, as he famously referred to it, ‘Leaping into the Void.’ The artist sprayed paint around the contours of the model’s body leaving a shadow-like image, with fire from a Bunsen burner leaving golden patterns on the paper ground. 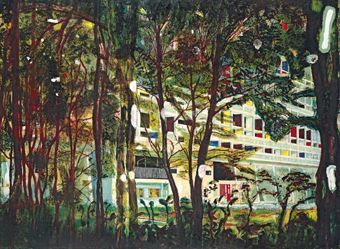 In 2009, Christie’s realised three of the four highest ever prices for works by Peter Doig (b.1959), the celebrated Scottish painter. His works continue to attract increasing attention, and in February Christie’s will offer another important large-scale canvas with Concrete Cabin West Side. The artist was inspired by Unité d'Habitation de Briey-en-Forêt, a building in northeast France designed by Le Corbusier which he saw in 1991, and which was the inspiration for his Turner Prize installation at the Tate in 1994. Arguably the greatest example from the series, the present work was selected by the owner from the artist’s studio in advance of its first exhibition at a gallery in London. It is expected to realise £2 million to £3 million. In October 2009 at Christie’s in London, Paris Bar by Martin Kippenberger (1953-1997) sold for £2.3 million – the second highest price for a work by the artist sold at auction. Following this success, the sale in February will offer two important works by the celebrated German artist; Untitled (from the series Lieber Maler Male mir / Dear Painter Paint Me), 1983, an important self-portrait (estimate: £800,000 to £1,200,000); and Fliegender Tanga (Flying Tanga), 1982-83, an important early work in 5 parts which was acquired directly from the artist by the present owner in 1984, and whose middle section portraying a Chinese child holding a can of Coca-Cola has become widely recognized as the cover of the Manic Street Preacher’s single Faster, and as the inspiration for Yue Minjun’s Looking for Art, 2007. The auction in London in October 2009 also established a record auction price for any work by Neo Rauch (b.1960) with Stellwerk (Signal Box), 1999, which sold for £892,450. The auction in February will offer Vorrat (Supply / Stock), a fantastical dreamscape executed by the artist in 1998 and expected to realise £500,000 to £700,000. Garden of Earthy Delights XIV, 2005, by Raqib Shaw (b.1974) is an outstanding work from one of the artist’s most important and celebrated series of paintings to date. A contemporary interpretation of the epic and similarly named triptych by Hieronymous Bosch, now in the Prado, Madrid, it is expected to realise £500,000 to £700,000. 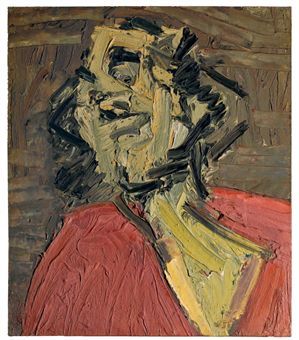 Following the recent publication of the first catalogue raisonne on the artist by William Feaver, the auction will present three works by Frank Auerbach (b.1931), all of which will be offered at auction for the first time. Using impasto so thick that at times it appears to be sculpted as well as painted, Auerbach’s style and subsequent success has seen him become one of the most important living British artists alongside his great compatriot and one of his biggest fans, Lucian Freud. Head of J.Y.M., 1973, is one of the artist’s most important portraits and portrays his most famous muse, Juliet Yardley Mills. A vibrant, colourful work, it has been in the possession of the current owner since 1974 and is expected to realise £900,000 to £1,200,000. Head of Helen Gillespie VI, 1966, is the last of a group of nine portraits of Helen Gillespie that the artist executed between 1961 and 1966 and is expected to realise £500,000 to £700,000; and J.Y.M. Seated II, 1996, one of the last portraits of Juliet Yardley Mills painted by the artist, carries an estimate of £180,000 to £250,000. Sicile (Agrigente), 1953, is from the celebrated series of portrayals of Agrigento in Sicily by Nicolas de Staël (1914-1955), other versions of which can be found in major museums around the world including MOCA, Los Angeles, Kunsthaus, Zurich and the Musée des Beaux-Arts in Grenoble. De Staël’s journey through Italy and to sicily in 1953 marked a crucial watershed for the artist’s work, as he was exposed to and deeply influenced by the sights, visions and intense light of the Mediterranean. Acquired by the current owner directly from the artist, it will be offered at auction for the first time at Christie’s and is expected to realise £700,000 to £1,000,000. Fleurs Rouges, painted by the artist in 1952 and shown at the artist’s first major one-man exhibition in the United States the following year, carries an estimate of £600,000 to £800,000. In June 2009 in London, Christie’s offered the work of Portuguese artist Joana Vasconcelos (b.1971) for the first time on the international market. Gold Independent Heartne, 2004, a 4.5 metre tall, rotating heart made of plastic cutlery, exceeded its estimate of £80,000 to £120,000, selling for £163,250. In February, Marilyn will be offered with an estimate of £100,000 to £150,000. A pair of stiletto heels made from stainless steel pans and lids, and measuring 4 metres by 3 metres, the work was inspired by the shoes worn by Marilyn Monroe in the clip from The Seven Year Itch when she famously stood on an air vent.