Anon Lombard, "Two Cheetahs", 1400-10. Bodycolour and watercolour on vellum. A fine example of a model book drawing from north Italy. ©The Trustees of the British Museum

LONDON.- This spring, two major exhibitions at the British Museum will explore two important artistic traditions which flourished at the same time in different part of the worlds.

Kingdom of Ife: Sculptures from West Africa (4th March - 6th June 2010) will tell the story of the legendary city of Ife through some of the most refined and beautiful sculptures ever to be found in Africa, created between the 12th and 15th centuries. Meanwhile Fra Angelico to Leonardo: Italian Renaissance Drawings (22 April - 25 July 2010) will bring together the finest group of Italian drawings to be seen in this country for over seventy years, featuring 100 works by artists such as Fra Angelico, Botticelli, Leonardo da Vinci, Michelangelo and Titian. The exhibition will focus on the period between 1400 and 1510 and is a unique collaboration between the British Museum and the Uffizi Gallery in Florence.

Fra Angelico to Leonardo: Italian Renaissance Drawings
This major exhibition, supported by BP, will bring together the finest group of Italian Renaissance drawings to be seen in this country for over seventy years. Drawn from the two foremost collections in the field, the Gabinetto Disegni e Stampe Uffizi in Florence and the British Museum, the display will chart the increasing importance of drawing during the period between 1400 and 1510, featuring 100 works by amongst others Fra Angelico, Jacopo and Gentile Bellini, Botticelli, Carpaccio, Leonardo da Vinci, Filippo Lippi, Mantegna, Michelangelo, Titian and Verrocchio. In addition, infrared reflectography and other non-invasive scientific analysis of the works will give fresh insights into the techniques and creative thinking of Renaissance artists as they experimented with a freedom not always apparent in their finished works.

In 15th century Italy a fundamental shift took place in the use of preparatory drawings. The starting point of 1400 marks the beginning of the Renaissance, which saw the development of perspective, an increased interest in classical forms and a greater focus on naturalism. The exhibition closes with the early drawings by Raphael and Michelangelo, prior to their departure to Rome and the unfolding of the High Renaissance. It was during the 1400s that artists began to make drawings as works of art in their own right, signifying the beginning of a wider appreciation of graphic works, which were beginning to be collected and preserved. This rising importance of drawing is evident in works such as Mantegna’s mordant allegory of human folly, the Virtus Combusta (Virtue in flames) or later examples of finished presentation drawings such Leonardo’s silverpoint Bust of a Warrior from the 1470s.

Nevertheless the majority of drawings in the exhibition are working studies, and as such were never intended to be seen outside the studio. Drawings allowed artists to practice and refine designs for paintings. It was during the 15th century that the stages of designing a painting from initial sketch to final design were worked out and this process remained in place until the modern age. Exploratory compositional studies were followed by detailed sketches of figures and important motifs, sometimes concluding with a same size drawing of the design known as cartoon. The exhibition will include the first surviving study for a panel painting: Lorenzo Monaco’s study in the Uffizi of around 1407 for the left-wing of his Coronation of the Virgin altarpiece from the National Gallery, London. The drawing and the related panel will be brought together for the first time.

The influence of classical art and architecture was a key factor in the emergence of a new approach by painters, sculptors and architects. A move towards realism, the representation of man and nature and the use of a linear perspective to create an illusion of the three dimensional form were the core elements of the Renaissance style, seen particularly in the album of finished drawings made by the Venetian painter Jacopo Bellini and in the works of his artistic rival Pisanello.

The importance of Leonardo in this period is reflected in the inclusion of ten drawings by him, including his celebrated pen study of a sun baked panoramic landscape that he precisely dated, 5 August 1473. This is the earliest landscape drawing in European art and the first documented work by Leonardo. The exhibition also examines how Leonardo’s extended stay in Milan affected the drawing style and practices of local artists, such as Boltraffio and Andrea Solario. Leonardo’s fresh naturalism and his desire to push the boundaries of painting inspired the generation of Michelangelo and Raphael to achieve what he had sketched out on paper but rarely delivered in terms of finished paintings.

The exhibition gives a broad overview of the development of drawing throughout Italy, but with a particular emphasis on Florence and Venice. Venetian artists tended to favour more atmospheric, tonal drawing compositions (Titian’s drawings in the exhibition provide an example) whilst Florentines tended to favour outline and emphatic volume (as seen on drawings by Verrocchio, Credi and Leonardo). Florentine drawing was characterised by the depiction of movement and the expression of emotion and states of mind by pose, gesture and drapery as seen in Verrochio’s Head of a woman and Leonardo’s Child with a cat. In Venice painting was very much a family business, dominated by the artistic dynasties of the Bellini and Vivarini families. For Venetian artists light and colour dominated their approach to drawing, hence the frequent use of veils of wash as seen in Carpaccio’s St Augustine in his study.

At the turn of the sixteenth century Raphael arrived in Florence. The groundwork of a dynamic and classically inspired style created by Michelangelo and Raphael in Papal Rome was established in Florence during the first decade of the 1500s. These artists took up and developed pre-existing Florentine artistic trends and took them onto a wider stage during the High Renaissance through works such as the studies of the Virgin and Child by Raphael and the Bruges Madonna studies by Michelangelo.

Fra Angelico to Leonardo will travel to the Uffizi in Florence after it closes in London on 25th July. Andrea del Verrocchio, Head of a woman. Charcoal, heightened with lead white, c. 1475. © The Trustees of the British Museum 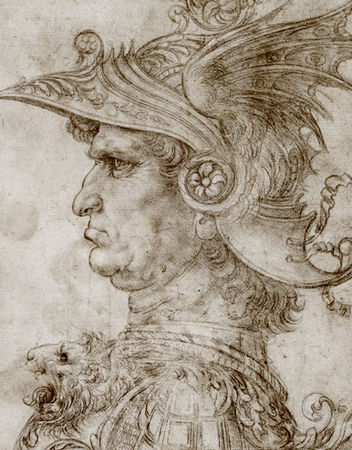 Leonardo da Vinci, Bust of a warrior, about 1475–80. © Trustees of the British Museum Vittore Carpaccio, The Vision of St Augustine (detail), about 1501–08 © Trustees of the British Museum