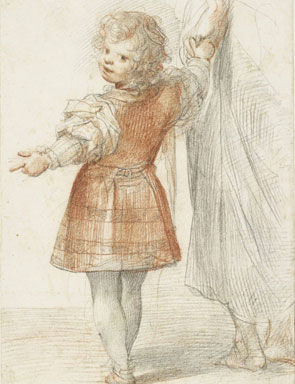 NEW YORK, NY.- In the early 1500s, Rome’s majesty was a distant memory: its marble temples and palaces had been ransacked; its population was a fraction of what it had been in antiquity. Yet, over the course of the next hundred years, the Eternal City would experience an amazing rebirth, as a series of popes rebuilt and revitalized Rome and its population doubled. At the center of this metamorphosis was an unprecedented influx of artistic talent and creative exchange.

It is this remarkable period in art history that is the subject of a new exhibition, Rome After Raphael, at The Morgan Library & Museum. Featuring more than eighty works selected almost exclusively from the Morgan’s exceptional collection of Italian drawings, the exhibition brings to light the intense artistic activity in Rome from the Renaissance to the beginning of the Baroque period, approximately from 1500 to 1600. The show is on view from January 22 through May 9, 2010.

The exhibition is the first in New York to focus solely on Roman Renaissance and Mannerist drawings, beginning with Raphael and ending with the dawn of a new era, the Baroque, as seen in the art of Annibale Carracci. It includes striking examples by Raphael and Michelangelo as well as works by artists associated with the dominant stylistic traditions established by these two iconic figures.

The exhibition also features Giulio Clovio’s sumptuous Farnese hours, one of the greatest illuminated manuscripts, as well as the Codex Mellon—an architectural treatise on key Roman sites and projects, including Raphael’s design for St. Peter’s—and a magnificent gilt binding of the period. Also on view is a Raphael workshop painting from the Morgan depicting the Holy Family, which has recently undergone a technical examination.

“The quality and importance of the Morgan’s collection of sixteenth-century Italian drawings has long been recognized,” remarked Morgan director William M. Griswold. “Although individual sheets have appeared in major exhibitions in Europe and the United States, the Morgan has never before brought together so many outstanding works from this period and place in one show. Seen together for the first time, the drawings convey the opulence and artistic diversity of this pivotal period.”

It was during the reign of Pope Julius II, elected in 1503, that Rome embarked on a century-long program of renewal and restoration. By the time Pope Clement VIII died in 1605, the overarching political and artistic ambitions of popes, cardinals, and foreign dignitaries had given rise to one of the richest periods in art history, transforming Rome into the unrivaled cultural capital of Europe.

Numerous drawings in the exhibition are related to Roman projects and commissions, including elaborate schemes for fresco decorations for city palaces, rural villas, and funerary chapels as well as altarpieces, tapestry designs, and views of recently discovered antiquities. The exhibition also opens a window into the artistic sensibility and lavish patronage of the period, from Julius II—patron of both Michelangelo and Raphael and arguably the most culturally sophisticated of the popes—to his successor Leo X and the “Gran Cardinale” Alessandro Farnese and his nephew Odoardo. Cardinal Ippolito d’Este and the Medici also generated luxurious commissions as they competed to create their own legacies in chapels, palaces, and villas.

Exhibition Highlights
Through their sheer quality and novelty, the works of Raphael and Michelangelo in the Vatican established a tradition that resonated throughout the history of Western art. The exhibition brings to the fore the central artistic dialectic of the century: the rivalry between the legacies of Raphael, whose work epitomizes elegant restraint and clear narrative style, and that of Michelangelo, characterized by high drama and muscular nudes.

Raphael
Arriving in Rome in 1508, Raphael found success as court artist to popes Julius II della Rovere and Leo X de’ Medici. The Morgan’s holdings by the artist trace his development from his early pre-Roman period, represented by the fresco design Cardinal Piccolomini Presents Eleanor of Portugal to Her Betrothed, Emperor Frederick III and the cartoon related to the predella panel depicting Christ’s Agony in the Garden, to his metalpoint drawing Male Figure Symbolizing an Earthquake—a study of ca. 1515 for one of the tapestries Raphael designed for the Sistine Chapel.

Raphael’s Followers
Heavily employed by a succession of popes and secular patrons, Raphael developed a large workshop that included artists such as Polidoro da Caravaggio, Perino del Vaga, and Giulio Romano, all magnificently represented in the Morgan’s collection of drawings. After Raphael’s premature death in 1520, these artists developed their own highly successful careers. Polidoro was one of the city’s most prolific facade decorators, an aspect of his career uniquely illustrated by the Morgan’s study of a Prisoner Brought Before a Judge, a scene once painted on a Roman house. Perino’s independent career included a commission from Cardinal Alessandro Farnese for the design of rock-crystal plaques, which today still comprise part of the treasury of St. Peter’s Basilica. The Morgan’s two extraordinary designs for this commission, Christ Healing the Lame at the Pool of Bethesda and the Miracle of the Loaves and Fishes, are on view in the exhibition. One of Raphael’s most successful pupils (and later court artist to the Gonzaga in Mantua), Giulio Romano is represented by an early lunette design and by the vigorous St. Jerome and St. Augustine. The show also includes the Codex Mellon, one of the earliest and most important volumes of Renaissance antiquarian drawings relating to contemporary architectural projects. Probably drafted ca. 1513 by an architect from the circle of the great Renaissance master Donato Bramante, the sketchbook records plans for the new basilica of St. Peter’s as well as those relating to Bramante’s Palazzo Caprini, also known as Raphael’s house.

Michelangelo
One of the great figures of the Renaissance whose fame has rarely been eclipsed, Michelangelo was among the forces that shaped the style usually called Mannerism. He had been summoned to Rome by Pope Julius II in 1508 to design the pope’s tomb for St. Peter’s, was also employed on the decoration of the Sistine ceiling and altar wall, and worked for the papacy in Rome for the last thirty years of his long and fruitful career. The Morgan’s Annunciation to the Virgin of ca. 1547 and a series of four sketches of David Slaying Goliath superbly demonstrate the artist’s consummate skill as a designer of dramatic compositions and draftsman of the human anatomy.

Michelangelo’s Followers
Unlike Raphael, Michelangelo did not keep a large workshop, although he did have a number of associates, artist friends, and followers. Among them was Daniele da Volterra, whose Kneeling Figure of ca. 1550—a study for a fresco in the church of Santissima Trinità dei Monti—is a rare example of his delicate, precise drawing style. A drawing attributed to Giulio Clovio, that is a reprise of Michelangelo’s renowned composition The Dream of Human Life (Il Sogno) of the early 1530s reflects the fame and influence of the great master’s highly refined and innovative presentation drawings. The show also includes the Farnese Hours, once the most famous illuminated manuscript, lavishly illustrated by Clovio for Cardinal Alessandro Farnese. Pellegrino Tibaldi’s heavily draped Seated Barbarian Prisoners, a further superb example of the enduring influence of Michelangelo’s figure style and draftsmanship, is also on display.

Parmigianino
Supremely gifted as a painter and draftsman, Parmigianino came to Rome in 1524 seeking papal patronage but fled, as did so many of his contemporaries, when the troops of Charles V invaded the city in 1527 during the Sack of Rome. A group of five drawings from this short period are shown, including a stunning red chalk design for a print of the philosopher Diogenes, a lyrical Girl Seated on the Ground that illustrates the artist’s penchant for domestic scenes, and a moving, pen-and-ink Pietà freely inspired by Michelangelo’s famous marble group in St. Peter’s.

Antiquity
As the city was being rebuilt and reconceived under the direction of the popes, archaeological finds were commonplace, triggering a sixteenth-century fashion for antiquity that spread throughout Europe. Marble sculptures representing river gods, excavated during the 1510s and immediately put on display at the Vatican Palace, are recorded in Enea Vico’s two spectacular, scrupulously detailed drawings of the early 1540s. Rome’s illustrious antiquarian past informed much artistic production as illustrated by the jewellike album on precious vellum titled The Ruins of Rome. This amusing juxtaposition of somewhat fanciful reconstructions of ancient monuments with their ruined 1570s appearance is an intriguing document of the Renaissance mind-set, bringing to life the vivid interest in reconstructing the antique.

Late Mannerism and the Counter-Reformation
The last third of the sixteenth century saw the predominance of a highly decorative and technically masterful style generally known as Late Mannerism. This is exceptionally well represented in the Morgan collection, with outstanding examples by Taddeo and Federico Zuccaro and their followers Girolamo Muziano, Jacopo Bertoia, and Cesare Nebbia. The weightless grace of their style can be seen in Taddeo’s St. John the Baptist Preaching and The Foundation of Orbetello, the latter a study for decoration of the Palazzo Farnese. Among the myriad themes that define the period are the need of the Roman Catholic Church to defend its authority against the rising threat of Protestantism. The Renaissance popes’ lavish spending had led them to encourage the sale of indulgences—two are documented in the exhibition—a practice heavily criticized by Martin Luther. Eventually, the Catholic Church recognized the need for reforms and convened the Council of Trent, resulting in a movement known as the Counter-Reformation, the consequences of which became apparent in artistic production toward the end of the sixteenth century. Palestrina’s mass for Pope Marcellus, the published score and recording of which are featured in the exhibition, places counter-reformatory emphasis on an easily comprehensible declamatory text.

Annibale Carracci and the Beginning of the Baroque
Several artists of the last decade of the sixteenth century facilitated the artistic reforms brought about by Annibale Carracci, his brother Agostino, and his cousin Ludovico. Giuseppe Cesari, called Il Cavaliere d’Arpino, is represented by the lively figure study of a Child Walking, Looking Over Its Shoulder and the striking Portrait of a Lady, both from the late 1580s. Both he and Cristofano Roncalli restricted the purely decorative Mannerist aspects of their work and reassessed High Renaissance models. Annibale Carracci himself paved the way for the Baroque, achieving a synthesis of Raphael’s elegance and Michelangelo’s drama and vigorous muscularity. Harkening back to Raphael, Annibale revived the practice of studying from the live model, as is amply obvious in his luminous Flying Putto of the late 1590s, which exhibits an astonishing command of the figure rendered in space. In addition, a new emphasis on an idealized yet naturalistic depiction of landscape is apparent in his magnificent Eroded Riverbank with Trees and Roots.

Rome After Raphael is organized by Rhoda Eitel-Porter, Charles W. Engelhard Curator and Department Head of Drawings and Prints at The Morgan Library & Museum.