DUSSELDORF.- Robert Mapplethorpe, who was born in 1946 and passed away in 1989, is one of the few artists who truly deserve to be known far beyond the borders of the art world. Mapplethorpe dominated photography in the late twentieth century and paved the way for the recognition of photography as an art form in its own right; he firmly anchored the subject of homosexuality in mass culture and created a classic photographic image, mostly of male bodies, which found its way into commercial photography.

In 2010, the NRW-Forum in Düsseldorf will organise a major retrospective of Robert Mapplethorpe’s photographs. His work was first shown in Germany in 1977 as part of documenta 6 in Kassel and then in a European solo exhibition in 1981 with German venues in Frankfurt, Hamburg and Munich. In addition to various museum and gallery exhibitions the largest museum exhibition in Germany of Mapplethorpe’s work took place in 1997 when the worldwide Mapplethorpe retrospective, which opened at the Louisiana Museum of Modern Art in Denmark, traveled to the Staatsgalerie in Stuttgart. The last time Robert Mapplethorpe's works were shown in Düsseldorf was in the exhibition ‘Mapplethorpe versus Rodin’ at the Kunsthalle in 1992.

Both during his life and since his death, Mapplethorpe’s work has been the subject of much controversial debate, particularly in the USA. Right up until the end of the twentieth century, exhibitions of his photographs were sometimes boycotted, censured, or in one case cancelled. His radical portrayals of nudity and sexual acts were always controversial; his photos of sadomasochistic practices in particular caused a stir and frequently resulted in protests outside exhibitions and in one instance, a lawsuits was brought against a museum director.

In Germany, on the other hand, Mapplethorpe’s photographs were part of the ‘aesthetic socialisation’ of the generations that grew up in the 1980s and early 1990s. Lisa Ortgioes, the presenter of the German women’s television programme ‘frau tv’, notes that during this time, Mapplethorpe’s photos were sold as posters; his ‘black’ portraits in particular being a regular feature on the walls of student bedrooms at the time.

The curator of the exhibition, Werner Lippert, is quick to point out that ‘this exhibition needs no justification. Mapplethorpe was quite simply and unquestionably one of the most important photographers of the twentieth century. It is an artistic necessity.’

The exhibition in the NRW-Forum covers all areas of Mapplethorpe’s work, from portraits and self-portraits, homosexuality, nudes, flowers and the quintessence of his oeuvre the photographic images of sculptures, including early Polaroids. The photographs are arranged according to themes such as ‘self portraits’, which includes the infamous shot of him with a bullwhip inserted in his anus, as well as his almost poetic portraits of his muse, Patti Smith, the photographs of black men versus white women, the body builder Lisa Lyon, the juxtaposition of penises and flowers (which Mapplethorpe himself commented on in an interview: ‘… I've tried to juxtapose a flower, then a picture of a cock, then a portrait, so that you could see they were the same’), and finally those images of classical beauty based on renaissance sculptures, and impressive portraits of children and celebrities of the day.

Despite the obvious references to the Renaissance idea of what constitutes ideal beauty and the history of photography from Wilhelm von Gloeden to Man Ray, this exhibition shows Robert Mapplethorpe as an artist who is firmly anchored is his era; his contemporaries are Andy Warhol and Brice Marden; Polaroids were the medium of choice in the 1970s, and the focus on the body and sexuality was, at the time, for many artists like Vito Acconci or Bruce Nauman a theme that was key to social change. Above all, Robert Mapplethorpe developed his own photographic style that paid homage to the ideals of perfection and form. ‘I look for the perfection of form. I do this in portraits, in photographs of penises, in photographs of flowers.’ The fact that the photographs are displayed on snow-white walls underpins this view of his work and consciously moves away from the coy Boudoir-style presentation of his photographs on lilac and purple walls a dominant feature of exhibitions of Mapplethorpe’s work for many years and opens up the work to a more concept-based, minimalist view of things.

The selection of over 150 photographs covers early Polaroids from 1973 to his final self-portraits from the year 1988, which show how marked he was by illness and hint at his impending death, and also includes both many well-known, almost iconic images as well as some never-before seen or rarely shown works. The curators delved deep into the collection of the New York-based Robert Mapplethorpe Foundation to create this retrospective. 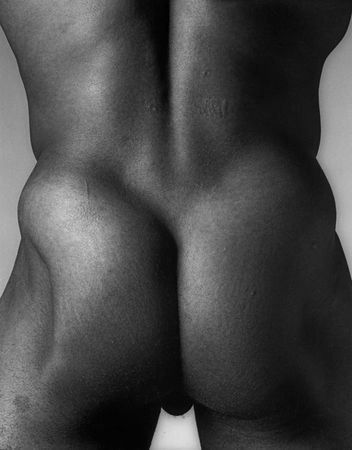