GLASGOW.- From the earliest times, the southern shores of the Baltic Sea have been associated with the gathering, trading and working of amber - a natural substance which has been long valued by man.

Featuring some of the finest items from the Polish national collection, this new exhibition, ‘Amber: Treasures from Poland’ offers a unique chance to see some fascinating and beautiful artefacts which represent both natural history and northern European craftsmanship. This is the first time that these items have been exhibited in the UK.

Amber is found in many varieties of colours and forms and amber from the Baltic region of Europe is one of the most abundant in the world. It is used around the world for medical or spiritual wellbeing, for adornment or decoration, and for scientific reasons.

This exhibition introduces amber from prehistory to natural history; it looks at how people related to amber from the Stone Age onwards and at the incredible techniques and skill of the amber craftsmen who created some of the finest examples of amber art ever seen.

The launch of a new book ‘Amber: Tears of the Gods’ (Dunedin Academic Press) will coincide with the opening of the exhibition. It has been written by Dr Neil DL Clark, Curator of Palaeontology at the Hunterian.

‘Amber: Treasures from Poland’ is at the Hunterian Art Gallery, University of Glasgow, from 5 February until 17 April 2010. One of the most exciting aspects of amber is that it contains the fossilised remains of plants and animals in a beautiful state of preservation. Inclusions were even noticed by the Romans in the 1st century AD when large pieces of amber were brought to Rome for Nero's gladiatorial games as a protective talisman:

The heaviest piece brought to Rome by Juliannus weighed about 13 pounds. That amber first exuded as a liquid is proved by certain objects, such as gnats and lizards, being visible inside it. These undoubtedly stuck to the fresh sap and remained trapped inside when it hardened. (Pliny the Elder 1st century AD)

The value of these inclusions to Science and our understanding of the ecology of the 40 million year old Baltic amber forest is incalculable. These inclusions tell us a great deal about the animals and plants in the amber forest; changes in climate and the seasons; interactions between the flora and fauna; and important clues to the evolution of certain plants and animals.

Harvestman spider (opilione)
The most common types of inclusions in Baltic amber, are the insects and spiders. These inclusions further help us understand life in this ancient amber forest. This harvestman spider is probably omnivorous scavenging on insect and plant remains.

Cockroach
Cockroaches have adapted to live in a wide variety of habitats including the amber forests of the Baltic region. The spines on their legs help them to move in difficult terrains. This casket, from the Michael Redlin Workshop in Gdańsk (ca. 1680), is constructed of oval plates with eglomise´e technique engravings of ocean scenes. The lid is decorated with the seated figure of Ceres (the goddess of fertility). Towards the end of the 16th century artists mastered the art of carving small amber plates, which they engraved from beneath and joined together using glue or silver frames. This technique was used on the first amber caskets, used for storing jewellery and important documents. Miniature scenes were carved on the reverse side of thin plaques of amber. Placing gold leaf under the engraved amber plaques added luminosity to the whole piece (the eglomise´e technique). Ivory was also often used in combination with amber in early pieces in the form of plaques or medallions on amber jewellery cases, candlestick holders, or family altars. From the Malbork collection only three pieces are dated; one is a fork dated 1680, another on a nineteenth century clock from Kaliningrad, and the third is this baroque home altar. Many amber products at this time were still made to supply a demand for religious pieces. A fine ornate example of this type of work is this large multi-storey home altar, dated to 1687, each consecutive storey being flatter and shorter, to produce a slender, towering shape. A veneer of differently coloured pieces of amber, as well as ivory, applied to the altar provides a multicoloured decorative effect. Ivory was used for the statue of Christ and angel as well as the central relief illustrating the Last Supper, several plaquettes of various scenes from the New and Old Testaments, and balustrades in the lower section. On the top of the altar there is an amber figure of the resurrected Christ. The Hunterian has had amber in its collections since Dr William Hunter bequeathed his collection to the University of Glasgow in 1783. The original pieces included Hunter's amber cup, some casket plaquettes and a few pieces of raw amber. The Hunter amber cup is thought to have been manufactured in the early 17th century and may be the work of the Gdańsk amber craftsman Jacob Dobbermann (1682-1745). Two wingless cherubs in yellow amber (perhaps originally a much lighter colour of amber) form the pedestal supporting the transparent orange-red amber floral cup. There is no record of what the piece was used for, or to whom it belonged before it passed into the hands of William Hunter. Wasps are quite rare in amber. They are often seen trapped in a struggle attempting to escape their amber trap. Some of the earliest wasps in amber are found from the Cretaceous period over 100 million years old. This parasitic wasp may have used its 'sting' to lay it's eggs rather than for attack. 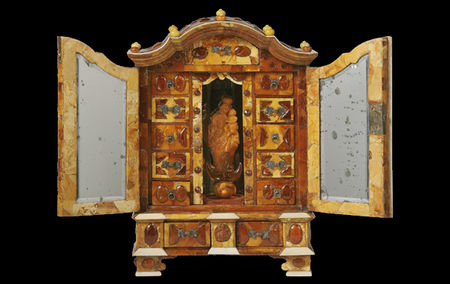 An important piece of 18th century amber work surprisingly turned up in Scotland. How it got there is a bit of a mystery, but it once belonged to the last king of Poland, Stanisław August Poniatowski, who was forced to abdicate in 1795 and later died, deeply in debt, in 1798. Lady Barbara Carmont of Edinburgh donated this important piece to the collections at Malbork Castle Museum in 1979. According to Lady Carmont, the cabinet had made its way to Italy after the death of the king, where it was purchased by an ancestor of Lord Carmont, who at that time was a treasurer at the Vatican. The cabinet, apart from its undeniable artistic value, is of immense historical value to Poland, as it contains engraved scenes and inscriptions relating to the most significant events from the life of Stanislaw August. Even more important are some personal inscriptions hidden beneath the amber medallions, which express the bitterness felt by the monarch after he was almost kidnapped by the Bar Confederation (an association of Polish nobles) in November 1771. The cabinet is in the shape of a miniature baroque cabinet filled in with drawers. In the central recess is an earlier 17th century statue of the Virgin Mary with Child. Perhaps Stanislaw August had this piece of furniture made with the intention of placing the amber Madonna in the recess as a votive offering for being rescued. 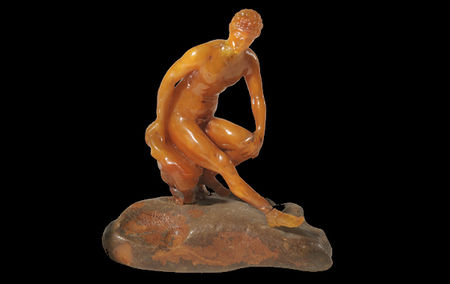 Little 16th century amber is recorded from Gdańsk, most coming from workshops in Kaliningrad. They are small, being limited both by the size of the raw material, and the skills and knowledge of the craftsmen not yet able to meld small pieces of amber together. Statues such as this one of Hermes would have been made from a single amber nugget.