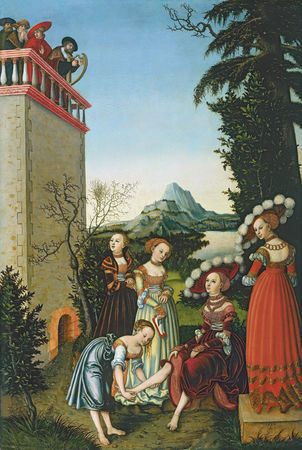 Bernheimer-Colnaghi celebrates its 250th anniversary year by bringing a splendid selection of works that will appeal to collectors at all levels to TEFAF, the world’s leading art and antiques fair, which takes place at the Maastricht Exhibition & Congress Centre (MECC) in the Netherlands from Friday 12 to Sunday 21 March 2010. Stand 306.

Amongst the most important paintings is Spring: a landscape with elegant company on a tree-lined road by Joos de Momper the Younger (1564-1635) and Jan Brueghel the Elder (1568-1625). These two major painters collaborated on more than eighty paintings over a period of almost thirty years, a scale of collaborative painting that is unique to 17th century Flemish art and which continues to fascinate both collectors and art historians. De Momper’s large, broadly painted landscapes provided atmospheric settings for Brueghel’s figures, while they in turn animated de Momper’s vast landscape views. This particular landscape, which has been dated to 1618-19, displays the skilful integration of the figures typical of Brueghel’s and de Momper’s best collaborative works. A price of around €3 million will be asked for this stunning painting. The name of Colnaghi has long been associated with Italian painting and three new discoveries will be on view at Maastricht. The first is a private devotional image of The Virgin and Child with the Young Saint John the Baptist that belongs to the great Florentine painting tradition established by Lorenzo di Credi and Domenico Ghirlandaio in the late 15th century. Everett Fahy, Curator of European Paintings Emeritus of the Metropolitan Museum of Art, has recently identified it as a work by The Master of the Holden Tondo active in Florence in the 1490s at the height of the Renaissance. (price: in the region of €700,000)

The second discovery is an unpublished Rest on the Flight into Egypt, a major addition to the oeuvre of Giovanni Maria Morandi (1622-1717), identified by Erich Schleier and dated by him to the 1680s. It is closely related to two other paintings by Morandi of the same subject, one in the Pallavicini collection in Rome and the other in the collection of Nelson Shanks, Andalusia, Pa, USA. Morandi was born and trained in Florence but spent most of his long professional career in Rome where his Florentine style set him apart from his peers. This highly finished work is notable for details such as the basket filled with cherries and the two white rabbits at the feet of the Virgin, symbols of her triumph over lust. (price: in the region of €500,000) 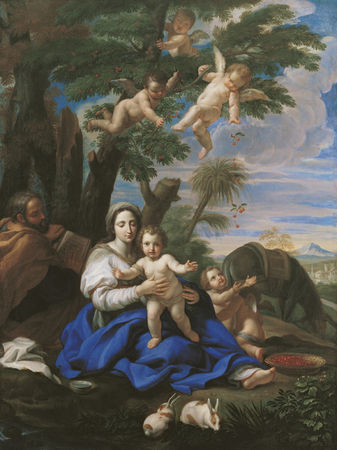 An early unpublished work by Jan Brueghel the Younger (1601-1678), Still life of tulips, roses, narcissi and other flowers in a glass vase, was painted at a time when he was working in his father’s studio and the influence of Jan Brueghel the Elder can be seen in the composition of the painting, with its small scale and glass vase, as well as the fine detail of the tulips. It will be included in the forthcoming catalogue raisonné by Klaus Ertz. (price: in the region of €850,000) A magnificent View of Genoa from the East with the Lanterna and the Church of S. Maria Assunta di Carignano in the distance and, to the right, the Santuario di Nostra Signora del Monte by Louis-Auguste Lapito (1803-1874), signed and dated 1863, is one of three paintings exhibited by the artist at the Paris Salon of 1863. Although Italy was always a popular destination for vedutisti in the 18th and 19th centuries, views of Genoa are rare compared to those of Venice, Florence, Rome and Naples. The painting, bathed with limpid Mediterranean light, shows the Santuario di Nostra Signora del Monte, a Franciscan convent now surrounded by suburbia. Christopher Columbus’s uncle was one of the early lighthouse keepers of the famous 16th century Lanterna shown in the distance. Lapito was a prolific and successful artist who won a first class medal in the Paris Salon of 1835 and was awarded the Légion d’Honneur in 1837. (price: €325,000) 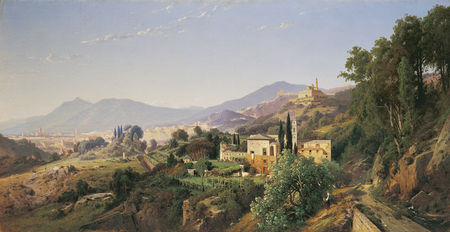 Louis-Auguste Lapito (1803-1874) View of Genoa from the East with the Lanterna and the Church of S. Maria Assunta di Carignano in the distance and, to the right, the Santuario di Nostra Signora del Monte. Oil on canvas, 67 x 130 cm

Amongst the French paintings will be another recent discovery, The Toilet of Venus, signed and dated 1698, by Nicolas Colombel (1644-1717), who was one of the last great Poussinists of the 17th century. Colombel is known for his clean classicism, meticulous technique and vibrant colours. Before 1680 the artist travelled to Rome where he developed his highly classical style in response to the work of artists such as Raphael and Poussin. Recently rediscovered in a private collection in Paris, this rare dated work can be identified with a lost work confiscated in 1793 from the ‘Émigré Vintimille’ as he went into exile after the French Revolution. This was probably Charles Emmanuel-Marie-Magdelon de Vintimille, the illegitimate son of Louis XV and Pauline, wife of Jean-Baptiste, comte de Vintimille. (price: over €500,000) A magnificent still life is a rare work by François Habert who was active in France in the mid-17th century. Little is known of the artist’s life except for two early references to him in the inventory of the artist Philippe de Champaigne and in the collection of Charles Tardif (d. 1728), private secretary to Maréchal de Bouflers. Habert was active when many Dutch and Flemish still-life artists were living in Paris and the opulence of this work, which depicts a basket of grapes, a bowl of cherries, a silver-gilt columbine cup and a silver vessel with sprays of cherry on a draped table, reflects the sumptuous and decorative style that dominated the genre at that time. (price: in the region of €1.4 million) 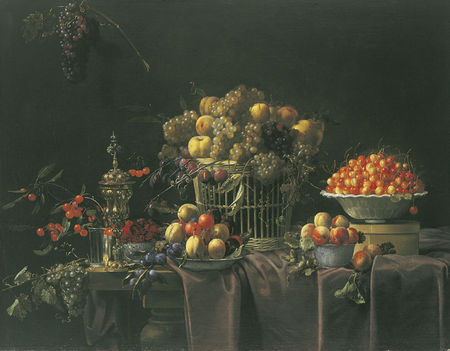 François Habert (active in France c. 1650) A basket of grapes, a bowl of cherries, a silver-gilt columbine cup and a silver vessel with sprays of cherry on a draped table. Oil on canvas, 92 x 115 cm

A beautifully preserved pastel portrait of Mme Camille d’Hubert, née de la Houssaye, which comes directly by descent from the family of the sitter, is a fine example of the revivalist style of portraiture that became popular in France during the Second Empire (1852-1870) and was championed by Empress Eugenie. Painted by Alphonse-Louis Galbrund (1810-1885), the work is in remarkably good condition and displays the artist’s virtuoso handling of the medium of pastel, consciously harking back to the grandest French 18th century prototypes such as the portraits of Marquise de Pompadour by Maurice-Quentin Delatour in the Musée du Louvre. (price: over €250,000)

Very little is known about the life of Henri Stresor (1613?-1679). Said to be of German extraction and to have lived in Paris from 1644, he painted in the style of the Le Nain brothers. Colnaghi will be showing The Oyster Eater, a fine painting that once belonged to Cardinal Joseph Fesch (1763-1839), which depicts a young man seated at a draped table laid with oysters and a flagon of wine (price: in the region of €1,500,000) A particularly fascinating painting is The artist’s studio by the leading artist of the Austrian Rococo, Johann Georg Platzer (1704-1761) who specialised in cabinet pictures painted almost exclusively on copper, silver and other metals, and is best known for his keenly observed conversation pieces and genre scenes. This work shows the various stages in the production of a painting including a woman crushing pigments in the foreground and a life-drawing class in the background. On the easel in the centre of the painting is a framed Bacchanal, most likely one of the artist’s own works, and before it sits an old gentleman who appears to be a critic or connoisseur. Platzer includes himself in this scene and the frame in the painting is the same as the actual one on the painting being offered at Maastricht. (price: in the region of €1 million) In this anniversary year, Bernheimer-Colnaghi will return to Maastricht with two masterpieces, David and Bathsheba, by Lucas Cranach the Elder (1472-1553) and St Mark by Frans Hals (1580-1666). The story of David and Bathsheba was a popular subject in Renaissance Germany and one that was treated by Lucas Cranach and his sons on a number of occasions and in a variety of media. Dated 1534, the painting is an important and unusually grand treatment of the theme by the artist. It is a superb example of the refined and meticulous technique for which Cranach was justly famous, evident here in the richness of the costumes and the elaborate landscape setting. (price: on request)

Frans Hals was one of the greatest portraitists in the history of art. Hidden from public view for 30 years, St Mark is one of a set of paintings depicting the Four Evangelists, the only known extant religious works by the artist. Acquired in the 18th century by Catherine the Great of Russia for the Imperial Hermitage in St. Petersburg, the series was deaccessioned in 1812 and sent to a church in Crimea, at which point the works disappeared for over a hundred years. In 1959, St Luke and St Matthew were rediscovered in the store of the Odessa Museum and in 1997 the St John reappeared at Sotheby’s in London where it was bought by the J. Paul Getty Museum. St Mark passed through several European collections, most recently a private collection in Germany. (price: on request) The wonderful display of paintings and drawings to be offered by Bernheimer-Colnaghi at TEFAF exemplify the quality of the works and the expertise that has been the hallmark of the 250-year history of this distinguished company.